Since the past few days, I noticed that my router was a bit slow, and was restarting itself at times. When looked at its logs, they had entries like:

I thought I was being bombarded by packets from the specified IP and contacted the owners, only to get told that the router was instead preventing a machine from within my network from spamming the said IP.

Eventually, I narrowed the bad traffic down to my MBP. i.e. I'd occasionally get those entries in my router when my MBP was connected, but not for any of the other machines. To find out what was causing the issue, I installed Private Eye, but that didn't flag anything.

Finally, I ran Wireshark and saw that something was constantly sending out a lot of packets to seemingly random IPs. There was a bit of a pattern in the order of packets though.

I've seen a few other posts where people have complained about strange traffic, and the answer usually is that it's just some idle traffic from the machine. But this definitely doesn't look like idle traffic. This sequence of packets is being sent constantly. Actually, these steps keep happening in parallel for multiple IPs (but their relative order seems to be preserved). So, there's quite a bit of traffic. When I look at the Activity Monitor, the traffic seems to be a steady 5-6 KB/s, which isn't a lot, except that it's spam.

I'm trying to narrow all this down to a single process (or a set of them), which hopefully help me make better sense of the situation. I haven't been successful so far though.

I've installed Little Snitch, but haven't got around to trying it (waiting for a virus scan to complete to restart the machine and finish its installation). I'm not quite hopeful of it identifying the culprit though, considering Private Eye didn't identify anything.

So, does anyone have any suggestions as to how I can figure out the process that's generating this traffic? Has anyone seen similar traffic? Any help is appreciated.

Ran Little Snitch, but that didn't turn up anything. i.e. When I run Wireshark, there's still the same strange traffic. But Little Snitch doesn't prompt me about those connections, possibly because no connections are established. So, I still have no clue as to which process is generating this traffic.

I had the steps wrong. The sequence starts with an external IP trying to send a packet to my TCP/UDP port 30149, which is refused by my machine. In case of TCP, it turns out to be an [RST, ACK]. And in case of UDP, it seems to send back an ICMP error message (never knew an ICMP message would be sent back in response to a UDP error). Here's a screencap of the Wireshark capture, filtered to one of the IPs: 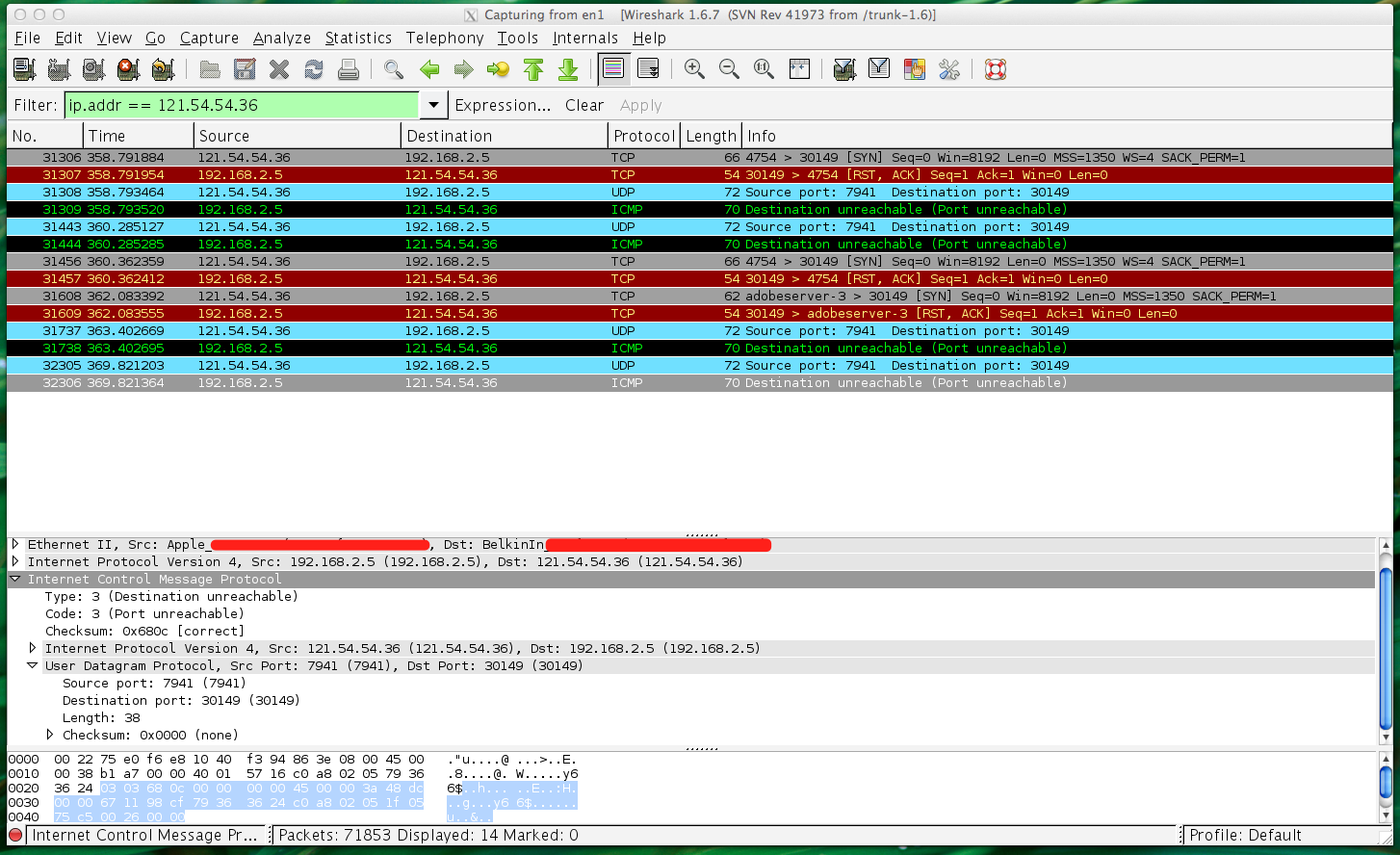 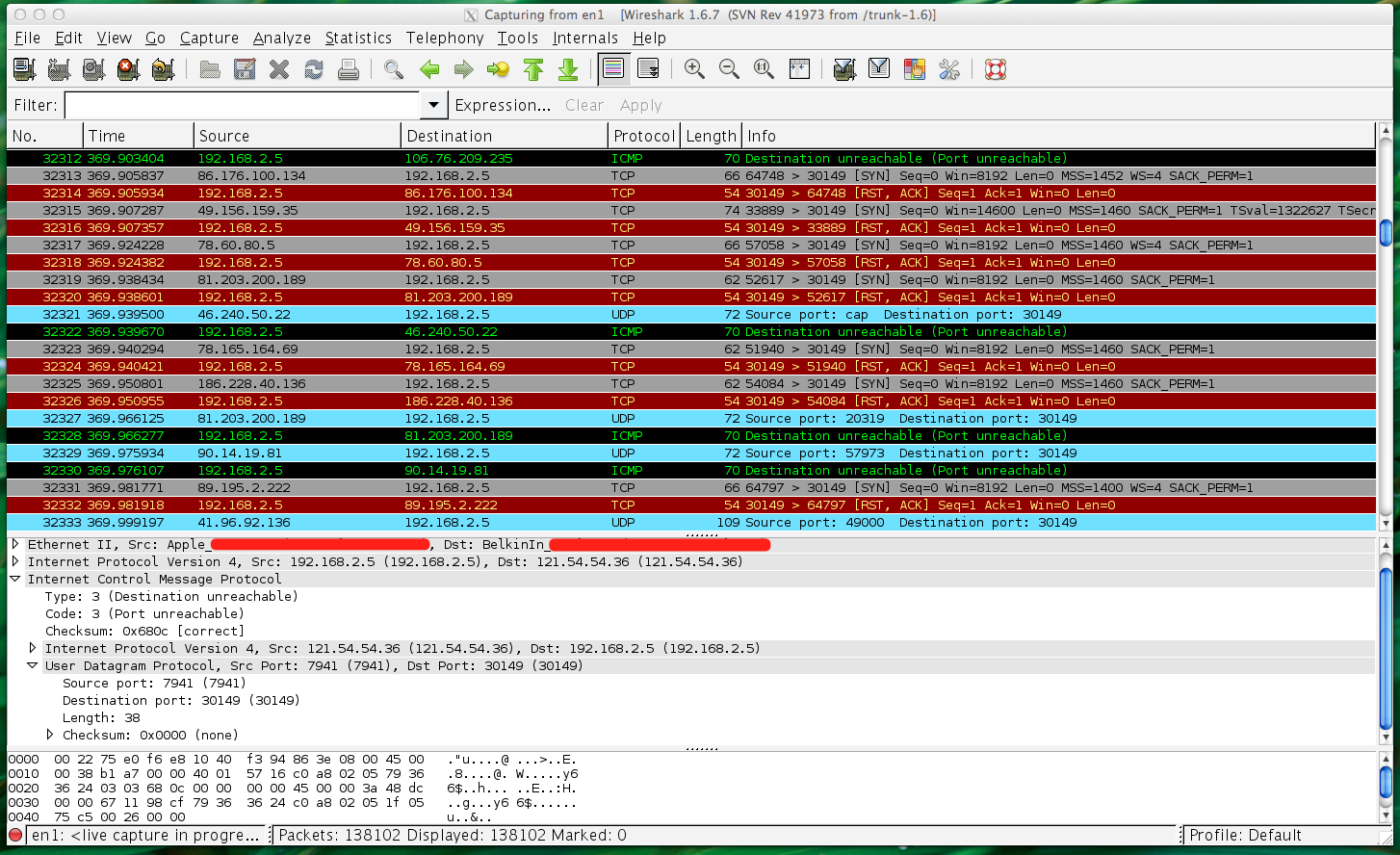 So, me trying to narrow it down to a local process was the wrong idea, since all these are inbound connections.

Strangely, I see this traffic only on my broadband connection. When I capture while connected through my Datacard (with wifi turned off, which's usually connected to the broadband connection), none of this traffic is seen. So, it looks like all these IPs are trying to hit my public IP (broadband), which gets assigned to me dynamically (but it still stays the same for over a month). Maybe the previous owner of the IP was infected, and this is just a result of that. Not sure. I still don't understand why this traffic shows up only on the MBP. It didn't show up when I set up a capture on other (Windows) machines.

At this point, I'm utterly confused, and I'm sorry if all this looks a bit nonsensical. I know I should rephrase/rewrite the question. I'll get to that later.

I'd normally suggest netstat -n -p in linux, but the Mac/BSD version doesn't associate with connections with processes unlike the linux version.

So maybe try to see if sudo lsof -lnP +M -i4? sudo in case its not your user id thats running it, -lnP to not convert UIDs/ip addresses/ports to usernames/domain names/common services, +M for portmapper registration info, and -i4 to see all ipv4 open connections.

Maybe write a watch script to grep for that port. Granted again macs don't have a watch command but you can simulate with a quick script like:

and eventually quit by Ctrl-C.

Looking at your edit; I think your computer may be fine, but you probably should reconfigure your firewalls/port forwarding rules on your router.

You should have your router act as a firewall and drop/ignore random packets that do not originate from a connection you initiated (and are not sent to a port for a server you are running that should be accessible by the outside world). Let's say your ISP issued IP address is 100.101.102.103 and my computer is 1.2.3.4 and your macbook pro is one computer behind your router with a local IP address 192.168.2.5. If I send a packet from my machine to that 100.101.102.103 on port 30149, your router should have no reason to forward that packet to 192.168.2.5 (versus any other computer connected to that router). The router should just drop it.

In summary: your router should not have any port forwarding rules set up, unless you are running services like http/ssh/nfs/cifs, etc at known ports that need to be accessible to the outside world.

Your computer is fine imho.

I think you're being scanned and it's a targetted scan on port 30149. I don't know of any vulnerable service running on that port but in my mind someone was looking for something on that port. I suspect they were scanning a large netblock and your public, IPv4 IP from your ISP was just one of many scanned.

I don't believe it's malware C&C traffic as everything is initiated inbound as far as I can see.

The attacker is performing the scan on port TCP and UDP port 30149 and as per their respective RFCs, your MBP is responding correctly when a destination port is closed (RFC 793 and 768 respectively) - RST/ACK to the TCP Syn attempt as the port on the MBP is closed and similarly for UDP with an ICMP Port Unreachable (type 3, code 3) so that's all good.

If you perform a reverse-dns lookup dig -t x IP on the various IPs that are attempting to connect to you, you'll see that they're quite geographically diverse. Given the short time-frame of the attack, this leads me to believe that the person attacking you has a small botnet and obviously, if they're decent, you shouldn't be able to see their real IP.

These IP addresses are all from systems (most likely on broadband connections) that have been compromised and similar to you, they have a static IP from the ISP (the hostname is a giveaway in most cases above).

So it's pretty standard inbound scanning that you see everywhere on the Internet. 'dr jimbob' has made some good suggestions and you should tighten up the rules on you external router to essentially only outbound initiated traffic (this might will 'active ftp' but hopefully you're neither using ftp and if you are, it's 'passive'). You can create some ACLs so that you don't leak information suck as ICMP Type 3 messages when ports/services are closed. I could go on forever here but there's loads of papers here on how to create perimeter protection (ignoring the fact that there's no real perimeter these days).

Finally and very interestingly, if you look here at Dshield, you'll see there was a spike worldwide in scanning port 30149 on June 29th/30th.

Most home routers (well the decent ones) have iptables on them and there's loads you can do on that - see the HowTo.

I would use dtrace. Setup a filter that looks for the sendto or sendmsg, SEND(2) commands used to send UDP packets, something like this;

You would have to add some additional decoding in there to obtain the parameters passed to those calls. The parameters for sendto and sendmsg are different so would require separate logic for each call. You can find those parameters in section 2 of the man pages. And maybe a search for some sample dtrace scripts showing how to unwrap the stack to get the parameters.

Not the answer you're looking for? Browse other questions tagged network attacks macos or ask your own question.

6
Strange STP traffic in my network, possible MitM attack?
3
Using Cain and Abel to capture traffic of machine in the same network
1
Why there are uninvited incoming packets to my ADSL connection?
2
MitM attempt resulting in ICMP redirects
5
How to deal with UDP bandwidth exhaustion DDoS attacks?
1
How to identify IP from a UDP-based DoS
1
tcpdump packets have bad and incorrect checksums on localhost, how to investigate further?