HTTPS but NOT encrypted?

I'm accessing Bing (https://www.bing.com) from within China. I got the following information: 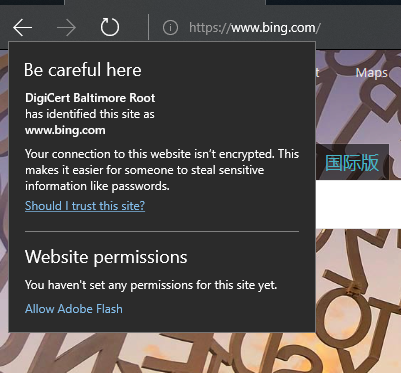 How could this happen? HTTPS but not encrypted, and with SSL certificate?

Edit for the pcap: my theory does not hold; the other points are still valid.

I will keep my original, speculational, answer, but TL;DR: if resources are loaded via http, such a warning is warranted.

As the comments go, this seems to be a warning about non-https resources used on the website. This might trigger warnings of that kind and for a good reason:

If scripts are loaded in such a way, a man in the middle can inject scripts that compromise every interaction with such a website (and even more, in case of an exploit being available to the attacker for your browser). Additionally, even other resources could lead to code being executed that was not intended to run in that context.

Now my original answer: This might be a downgrade attack that is allowed by Microsoft.

While the server has been authenticated, it seems that the server and you have established a plain text „encryption“.

Secondly: this might be useful if the client (or server) has very limited computational capabilities. As a mean to allowing access (availability) over secrecy, this can be useful.

Thirdly, my speculation: In this case, it is possible that bing is only allowed operation in China as long as the great firewall can look inside the traffic. Thus, Microsoft might have chosen availability over secrecy, making use of the plain text option to allow for deep packet inspection by the GFC.

It's not only in Edge, but also IE and Chrome. The reason is now clear: MS does serve content over insecure connections, at least in China. As the Mixed content warnings at the bottom right of the screen shot below indicate, the page requests images over HTTP, making it insecure: 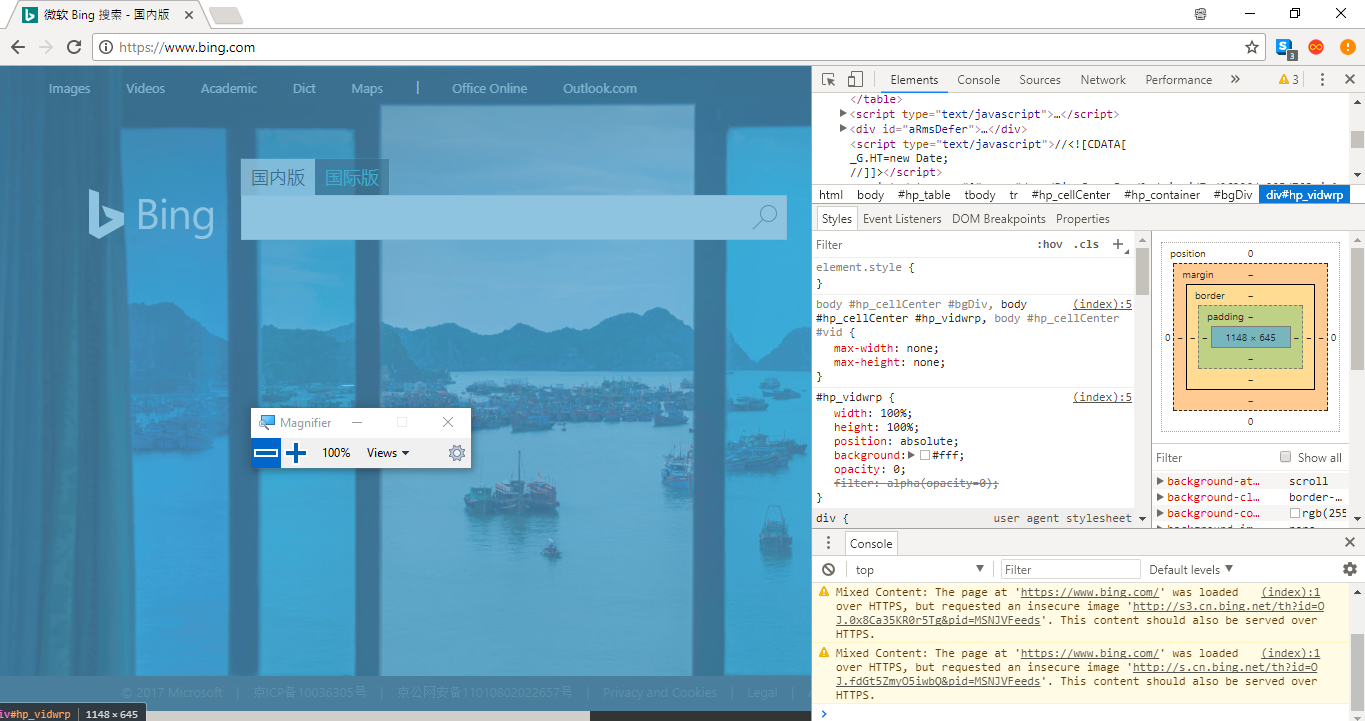 How could this happen? HTTPS but not encrypted, and with SSL certificate?

There are three ways I can think of that this could happen.

The site is practically loading mixed content, some content such as images and CSS will be loaded over an insecure channel while the main site content is served secured over HTTPS. As an example, if any of the content uses "form action="http" instead of "form action="https", this contributes to the possibility of site being compromised. In your specific case, there's additionally adobe flash. As long as you have flash content, so practically security is dead anyway. Adobe Flash runs inside the same process and memory as the web browser and frequent bugs in it give hackers lots of easy opportunities to gain access to memory. They then can jump to a specific memory address and do anything from there.

As for the SSL, When you request a HTTPS connection to a website, the website will initially send its SSL certificate to your browser. This certificate contains the public key needed to start the secure session. Based on this initial exchange, your browser and the website then initiate the 'SSL handshake'. The SSL handshake involves the generation of shared secrets to establish a uniquely secure connection between yourself and the website. A lot of things can go wrong here and the secure connection is no longer happening. Many times, it can be due to a compromised browser but it can be because of problems in the site also.

53
What does this Https - "not fully secure" warning mean?
11
Man-in-the-middle Blue Coat proxy SSL or what?

0
Wireshark Decode HTTPS Root Certificate
6
How do I verify exactly which cipher suite is in use for this Remote Desktop session?
116
I can't access websites that use HTTPS, instead getting the message "your connection is not private"!
3
SSL Authenticated SOAP Request works in SoapUI but not through code
1
TLS interception on an Android phone
1
Security implications of hostname identification in SNI and other SNI questions
0
Why this certificate is not secure?
1
Encrypt but not verify sender identity https without nagging user?
1
How to identify which certificate I'm missing to produce HTTPS calls?