How does WEP wireless security work?

I have tried to set up WEP security for my Wi-Fi. As per instructions from my ISP, I did the following:

What are these network keys?

The initialization vector in WEP is a 24-bit random value that is used to seed the RC4 algorithm.

RC4 is a stream cipher. This means that for each bit of plaintext, it produces one bit of keystream and xors the two, to generate the ciphertext. The keystream is simply a stream of random numbers, generated from the RC4 algorithm. 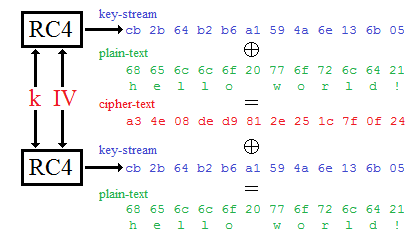 The problem with this is that a key is only a few tens of bits long, but the plaintext may be gigabytes. After a large number of bits have been produced by RC4, the random numbers become predictable, and may even loop back round to the start. This is obviously undesirable, because a known plaintext attack would be able to compute the keystream (c1 xor c2 = k) and use it to decrypt new messages.

In order to solve this problem, an IV was introduced to complement the seed. The IV is a random 24-bit value that changed periodically, in an attempt to prevent re-use of the keystream. Unfortunately, 24 bits is quite small, and the IV often wasn't generated in an unpredictable way, allowing attackers to guess future IVs and use them to deduce the key.

Further attacks involved actively injecting packets into the network, tricking the access point into issuing lots of new IVs, which allowed attackers to crack WEP in minutes or seconds.

You shouldn't use WEP, it's completely insecure and will offer you no protection.

WEP uses RC4 to encrypt the data. Since RC4 is a stream cipher, you can't reuse the key, therefore the RC4 key is built concatenating the WEP key with the IV (which changes with each network packet).

One of the huge flaws of WEP is that the IVs aren't unique and will end repeating over time in a busy network, due to its limited size.

Don't use WEP, use WPA instead.

To hide patterns in encrypted data while avoiding the re-issuing of a new key after each block cipher invocation a method is needed to randomize the input data.

That "method ... needed to randomize the input data" is initialized with a random value called the Initialization vector (aka IV).

WEP used a short IV (24-bits, to be exact), essentially nullifying its security,

The 802.11 encryption algorithm called WEP (short for Wired Equivalent Privacy) used a short, 24-bit IV, leading to reused IVs with the same key, which led to it being easily cracked. Packet injection allowed for WEP to be cracked in times as short as several seconds. This ultimately led to the deprecation of WEP.

Both quotes from the Initialization vector Wikipedia article.

Not the answer you're looking for? Browse other questions tagged cryptography wifi wep or ask your own question.

1
Encryption and Decryption in WEP protocol
1
WEP cracking - Why does many IVs allow to actually get the cipher key
27
Strength of WEP, WPA and WPA 2 PSK
3
Wi-fi security using WPA or WEP
1
Is (WEP) shared key authentication secure?

3
Wi-fi security using WPA or WEP
2
How WEP/WPA authentication works in a WiFi environment?
0
Secure end-to-end when part of conversation must be over HTTP
6
Does WPA2 Enterprise protect against evasdropping from within the network?
2
How ChopChop attack against WEP actually works?
9
Protection of eduroam credentials
1
Accessing WPA/WPA2 password from native auth form on a rogue router
2
How bad is WEP security presently?