My team has had some challenges with our current internal PKI management tools and we are looking for other solutions. One of my team members forwarded me a link to a page about Lemur, an open source framework from Netflix.

It's a pretty well written article and most of what is discussed seems relevant to struggles I've seen and experienced but there's one thing that I'm confused about.

The following diagram is meant to show "a typical procurement process". 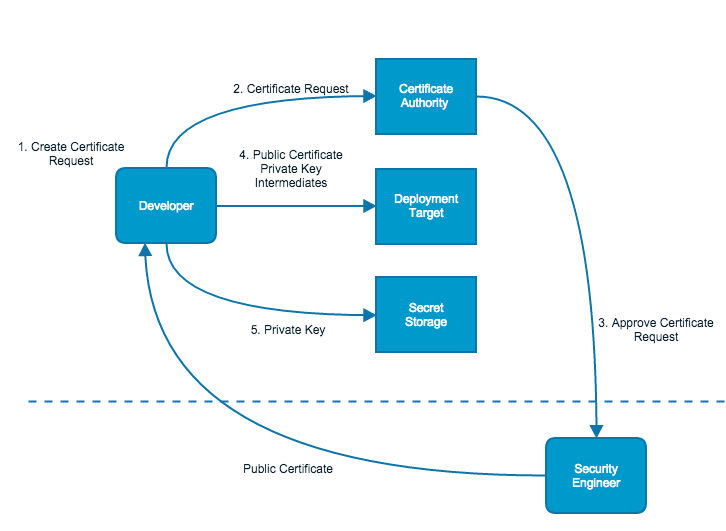 What I would typically do is generate a new key-pair on the host using something like the Java keytool. This generates the key and stores it in the keystore. Then a CSR is created and signed by the CA. The signed cert is then imported back into the store. I think this diagram can be interpreted to describe this process but it doesn't clearly show that the private key never leaves the 'deployment target'. 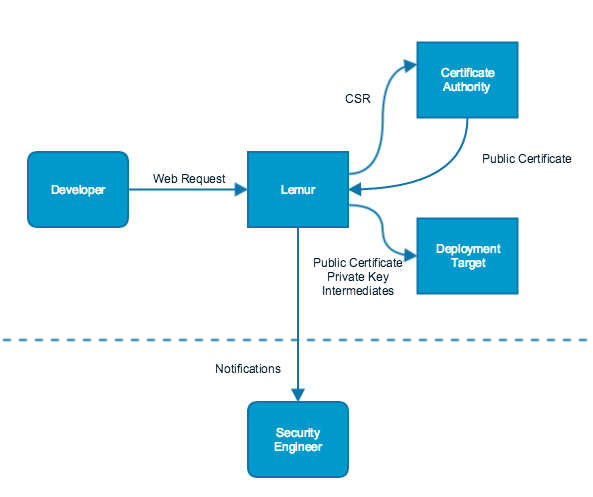 Now, it would seem from the diagram, that the private key is generated on a separate server and then delivered (presumably via secure means) to the 'deployment target'.

The ability to generate a CSR and get the public key signed without needing to move a private key around seems pretty slick to me. I thought it was designed this way for a reason. While I can see the advantages from a convenience perspective, isn't this approach of pushing private keys inherently adding more risk of private key exposure?

The text of the article says that it can support certificates generated elsewhere which but implies that this is to help transition to using Lemur to generate them. I'm not convinced that is a step forward. Am I missing something?

Yup, that's how I would read that too.

I assume that for a large cloud-based company like Netflix, the Lemur server would be part of their virtualized prod environment cluster and therefore held to the same level of network security as everything else in the prod environment. For example, if the deployment target is actually a cluster of VM hosts behind a load-balancer (or the load-balancer itself is terminating the TLS connections) then some amount of private key copying will be happening anyways and they'll have infrastructure to handle that properly. Adding a Lemur server to the cluster doesn't open any additional attack surface beyond what's already inherent to a large cloud deployment.

For smaller deployments where your prod server is a single machine, then I think your concerns are justified and it's worth asking some questions about additional copies of the private key floating around.

Generally in the past Netflix has communicated that they deploy baked AMIs (VM images) of their code, which are stripped down to exactly what they need. This usually also means they are using an autoscaling group in Amazon that get spun up as they require. This is changing with containers but the same general principal holds. 1

This usually has one major implication for secrets like private keys. You aren't generating them on the host that will run your service & you do not bake the secrets into the application artifact. You pull them down at runtime or they are loaded onto a load balancer.

Second bit that I think Lemur has in mind and another product called Vault from HashiCorp pushes heavily is that you centralize where you generate/store secrets so you have a limited spread of where they are. It also means that you aren't baking extra stuff for cert generation into your production images. It does mean you probably have a few juicy targets, but the gist I've been seeing from a lot of these players is that it is easier to centrally protect a few things segregated by blast radius than to poorly protect hundreds or thousands of things. Usually this goes had in hand with shorter lived secrets so if/when things get compromised you just change it out and you have practice in doing it so the damage is limited.

Not the answer you're looking for? Browse other questions tagged certificates public-key-infrastructure key-management or ask your own question.