What is PKCE actually protecting?

I'm trying to get my head around how PKCE works in a mobile app and there's something I don't quite understand.

So from what I can gather the client app creates a random cryptographically secure string known as the code-verifier. This is then stored. From this, the app then generates a code challenge. The code challenge is then sent in an API request to a server along with how the challenge was generated e.g S256 or plain. The server stores this challenge along with an appropriate authorization_code for the request in question.

When the client then tries to exchange the code for an access token it also sends the original code-verifier in the request. The server then retrieves the stored challenge and the method originaly used to generate it for this particular code and generates the equivalent s256/plain hash and compares them. If they match, it returns an access token.

What I don't get is how this is supposed to replace a secret in a client app? Surely if you wanted to spoof this you would just take the client_id as normal and generate your own code-verifier and challenge and you're in the same position as if PKCE wasn't required in the first place. What is PKCE actually trying to solve here if the original idea was that it is basically a 'dynamic secret'? My assumption is it's only there if someone happens to be 'listening' into when the auth_code is returned, but if you're using SSL again is this needed? It’s billed as replacing the fact you shouldn’t store a secret in a public app but the fact the client is responsible for generating rather than a server feels like it’s not actually helping there.

This write-up Okta has on this subject explains this pretty well IMHO.

The merits of a dynamic secret on a public client are obvious here - and the assumption for PKCE is that it is not difficult to intercept the response from the browser to your application.

The reason PKCE is important is that on mobile OS, the OS allows apps to register to handle redirect URIs so a malicious app can register and receive redirects with the authorization code for legitimate apps. This is known as an Authorization Code Interception Attack.

This is described by WSO2 here:

Since multiple applications can be registered as a handler for the specific redirect URI, the vulnerability of this flow, is that a malicious client could also register itself as a handler for the same URI scheme that a legitimate application handles. If this happens, it is a possibility that the operating system will parse the URI to the malicious client. The flow of this attack is illustrated in the following diagram.

To understand this better, here is a diagram and discussion from OpenID. You can see that the mobile System Browser has responsibility to receive the redirect URI and route it to the correct app. 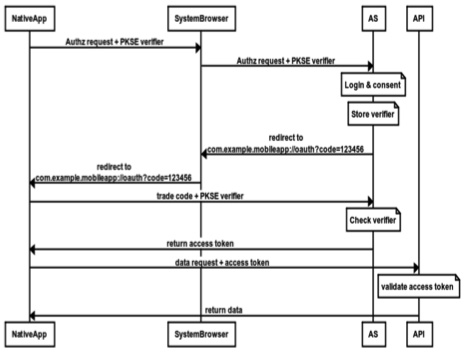 However, because mobile OSes can allow many apps to register for the same redirect URI, a malicious app can register for and receive a legitimate authorization code as shown in this diagram, also by WSO2:

PKCE mitigates this by requiring shared knowledge between the app initiating the OAuth 2.0 request (request auth code) and the one exchanging the auth code for token. In the case of an Auth Code Interception Attack, the malicious app does not have the verifier to complete the token exchange.

Not the answer you're looking for? Browse other questions tagged rest api client oauth2 or ask your own question.

1
What stops an attacker from simply using your client_id in their own auth code flow with PKCE
3
How exactly do mobile apps achieve authorization code flow with PKCE?
3
Does PKCE replace client-secrets?
0
Is PKCE really protecting public facing clients? Can't a rogue app steal the ClientID and Secret and make a AuthCode request of its own?
1
How would someone XSS into a WebView?

0
Can JSON webtokens be used to simplify the OAuth2 protocol without compromising security?
3
Why is PKCE secure against man-in-the-middle attacks?
8
Does PKCE replace state in the Authorization Code OAuth flow?
6
PKCE vs Client Secret
6
Auth code grant /w PKCE for SPAs
2
How is PKCE secure?
0
Is PKCE really protecting public facing clients? Can't a rogue app steal the ClientID and Secret and make a AuthCode request of its own?
1
Is OAuth2.0 Authorization Code Grant flow with PKCE really secure?
0
A Native Desktop App using PKCE - Can an id_token be consider valid authentication when passed to another protected server resource?