On a Mac, I am using AVG as the primary AV. In addition to this, I have a few scanners (Bitdefender and Malwarebytes) that I update and use periodically. Recently I decided to add Kaspersky's free scanner (from the App Store) to this list as well.

Oddly enough, when I was updating the recently installed Kaspersky, AVG complained about a couple of items:

Looking into it quickly, one seems to be a trojan and the other an infected iframe and the third seems to be, as described by Microsoft, a malware that attaches itself to other programs

Not surprisingly I am rather concerned. Is Kaspersky unreliable (keeping in mind recent rumors)? Are these false positives? Is my computer already compromised? And most importantly, what do you knowledgeable folks suggest I do now? The KDC file types that were caught by AVG do not seem amenable to inspection by a non-specialist user. 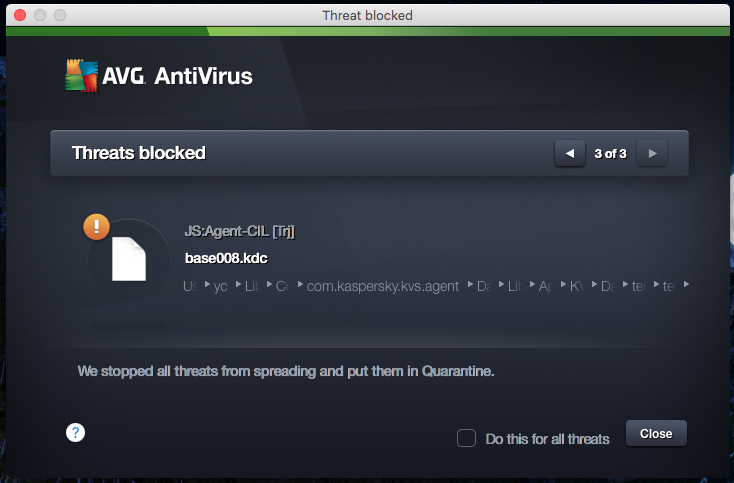 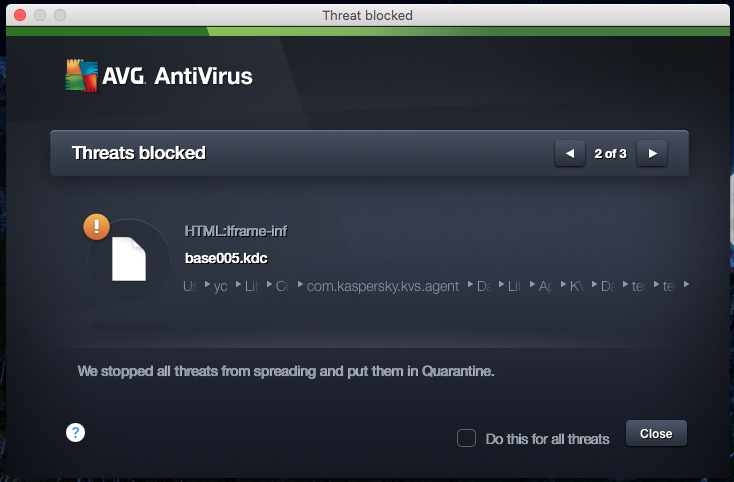 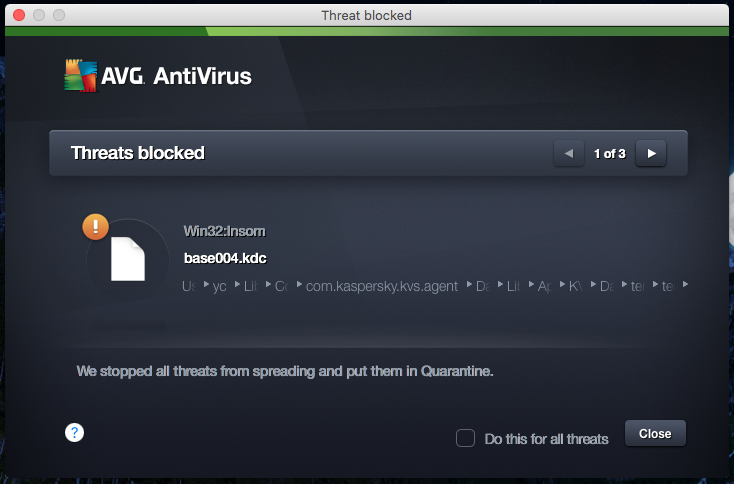 So, I uninstalled Kaspersky, just to be sure there's only one resident AV, and avoid these conflicts. And I also replaced AVG with Avast (I'm well aware the former is owned by the latter). A full system scan by the new Avast also popped up a nasty courtesy of Kaspersky. It seems this was somehow missed/skipped by AVG:

Disregarding the issue of one AV complaining about the other, seems very odd there are lingering base files even after uninstalling Kaspersky and rebooting the system. 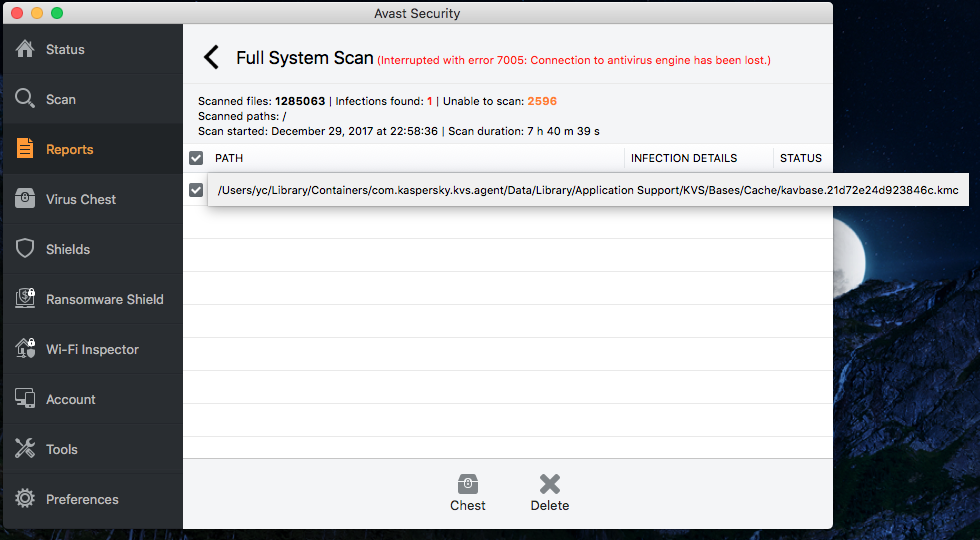 Even more interesting oddities: The file caught by Avast seems to exist in the Mac Finder (on right clicking in the AV window and doing show in Finder) but not when I try to find it in the terminal. Doing >file /path/to/directory/of/infected/file/ says there's no such file or directory. But doing "Go to the folder" with the same pathname works just fine. 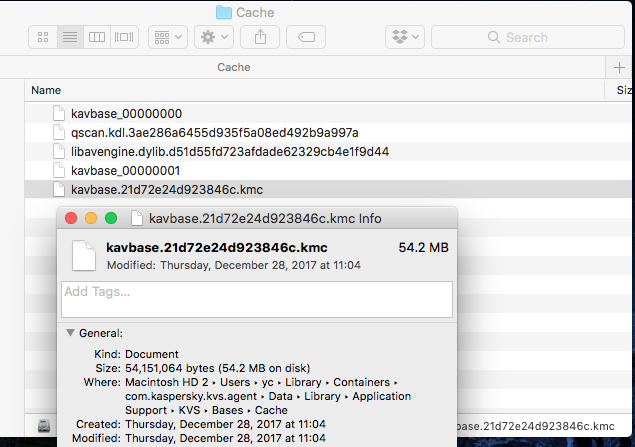 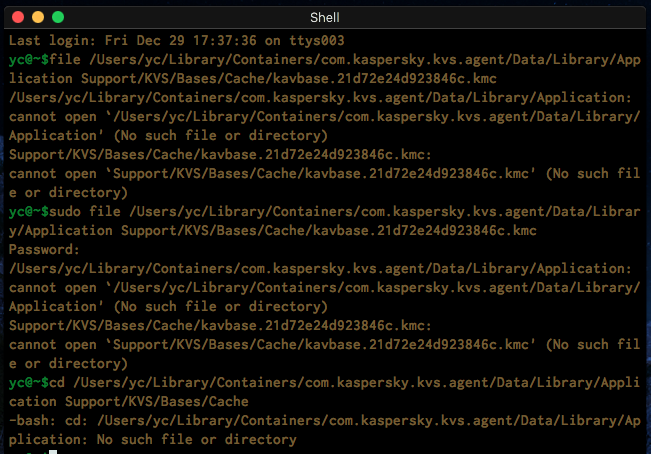 (I'm also very curious how one can achieve this - get a directory invisible in Terminal even with sudo ls but visible in Finder!! But that's probably a Q for a different site.)

They are false positives. Usually, is not a good idea to have two different AV software installed. One can block other as is your case.

In your case, concretely, it seems it's blocking database files. Maybe it has some known virus pattern. Of course, any AV has itself and its files as exception on detection but it is not know for other AV software and that's the reason why is detected as malware.

It is highly probable a false positive, if you download the antivirus from the legitimate source.

Usually, Antivirus will unpack any signed file, regardless of the file signing certificate. Most Antivirus vendor will selectively store competitor certificate to prevent false positive. But there is always exceptional.

As casual user, you can submit the quarantine file to correspondence AV that report it to check for false positive.

In addition, it is bad idea to have more than one prominent brand of Antivirus install in your system, as they will compete for resource to do redundant work.

Not the answer you're looking for? Browse other questions tagged malware antivirus detection trojan iframe or ask your own question.

5
Can any dangerous file(Virus, Trojan, Malware, etc) cause harm inside a zip or rar?
5
Why Antivirus Detects Simple Java Program as Trojan?
0
Retrieve a deleted trojan by Kaspersky for analysis (on windows 7)?
1
Can malware attach itself to user files?
3
Kali.download website blocked by Kaspersky because of Trojan, is it safe?
0
Is it possible to become infected with virus, trojan or malware by browsing the infected sites or running installation .exe?