Certificate SAN Disclosure. How harmful can it be?

It appears the registrar has signed with a single certificate a "lot" of domain. https://www.shodan.io/host/52.63.96.32 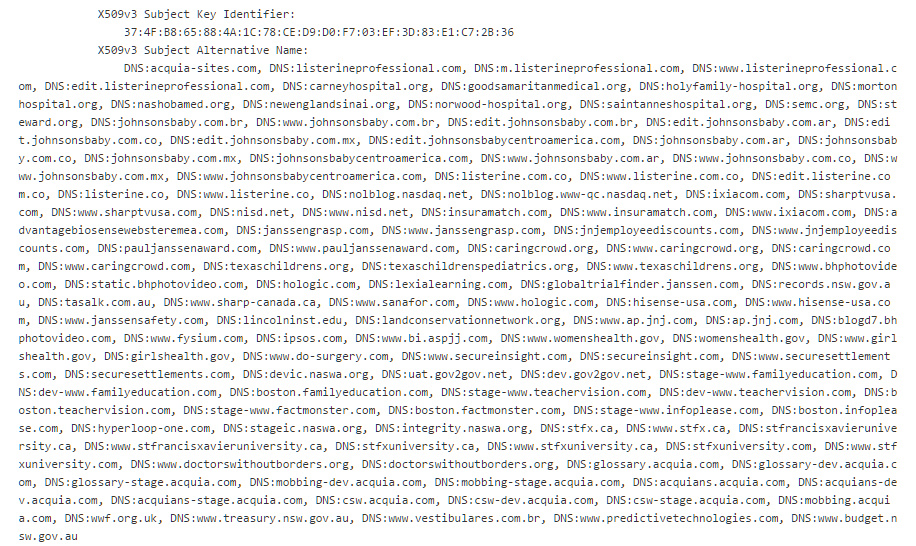 Am am right to assume that:

Also, If one of this website was to be compromised (Injection or XSS). Does it compromise other websites ?

And finally, Should I have any concerns if my company was hosting a website on this server ?

First, it is perfectly normal for content delivery networks to have such certificates. And given the IP address this looks like Amazon AWS, possible their CloudFront service which serves as a TLS termination point and load balancer which then forwards the traffic to the appropriate system. This is actually typical behavior which you will also see at Cloudflare CDN. Therefore I don't think that this was a mistake.

This is information leakage, it discloses websites that aren't advertised on search engines.

I think that these sites have explicitly configured HTTPS access so that they get included in the certificate.

This certificate is probably used at a load balancer which then forwards the requests to different sites which in case of Amazon AWS are probably each in their own VM.

Each customer should be concerned as this is potentially vulnerable to Meldown/Spectre ?

No. Sharing the same TLS termination endpoint should not cause such problems.

Also, If one of this website was to be compromised (Injection or XSS). Does it compromise other websites ?

XSS is not an attack against the server. Other injections like SQL injection can be. But given that these are probably independent sites running in their own VM a compromise of one VM does not compromise the other one.

And finally, Should I have any concerns if my company was hosting a website on this server ?

Not the answer you're looking for? Browse other questions tagged tls aws san or ask your own question.

2
What is the risk of data being recovered from SAN storage after logical deletion?
4
Multiple, different sites on same server. Individual SSL certificates for each or SAN certificate?
75
Should I reject a CSR when the host emailed me the private key for SSL certificate request?
5
What are wildcard certificate limitations in SAN extension?
15
Internal CA issues wildcard certificate
7
Add a San(Subject Alternative Name) to already existing cert?
1
Are SAN IP addresses / DNS names useless in self signed certificates by untrusted CAs?