Denial of Service on SSL services

Could such an imbalance be exploited to produce a DoS with greater efficacy? Are there any academic papers or proof-of-concept implementations of this?

Yes, a CPU-based DoS on SSL servers is easy. Consider the two main types of cipher suites, as commonly used in SSL:

Either way, the server must perform a relatively heavy cryptographic operation: an RSA decryption, or a DH modular exponentiation (for DHE, the server can reuse its ephemeral DH parameters, as long as it does not reboot, but it cannot evade the final modular exponentiation computed over what the client sends). On the other hand, a client who tries to DoS the server does not need to do any work at all: it just needs to send a blob of approximately the right size. Decryption on the server will fail, but the CPU expense will be lost nonetheless.

(Already with honest clients and RSA key exchange, the CPU cost is higher in the server, because RSA encryption is much faster than RSA decryption. But an evil client, intent on DoSing, can totally avoid work.)

Such attacks have been observed in the wild and it does not take an academic paper to explain how they work.

Yes, there are such points. Especially if SSL-Renegotiation is active, those can be exploited in order to bring down a server quite effectively: 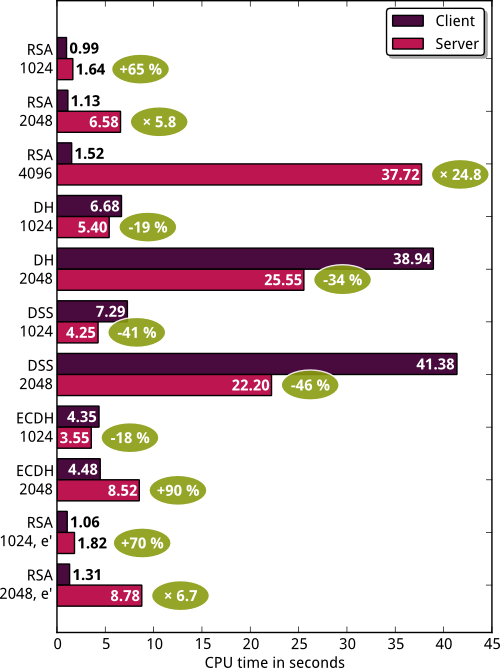 This chart, taken from SSL computational DoS mitigation shows the calculation-time needed to handshake between client and server, using common algorithms. As you can see some algorithms are significantly better than others.

For detailed information about this, checkout SSL computational DoS mitigation and the original release notes of the THC-Tool being used to demonstrated this dDoS: THC SSL DOS

hope i have helped,

The answer would be no, as you are the first to do the most work. But you can still attack it.

The key in your question is distributed. Even if the attacker has the same amount (or almost the same), there are numerous clients to start a handshake. Meaning that you don't need to put all your effort in when doing a handshake, just divide the workload over different clients and no client may feel a real significant change in performance, whilst the server might be at its limit.

I think the trick is to start multiple SSL sessions, but never do anything more than saying HELLO, the server will reply and wait. This means you can DoS it with its resources and max amount of sessions at the same time. (a bit like a TCP SYN attack)

Not the answer you're looking for? Browse other questions tagged tls ddos denial-of-service or ask your own question.

5
Why can't the SSL handshake be done in one step?
15
Prevent denial of service attacks against slow hashing functions?
3
SSL Based Denial of Services due to Message Digest
8
Lessen impact of DoS attack on cpu-expensive login?
9
How does a Distributed Denial Of Service Attack work
6
“Web of trust” for self-signed SSL certificates?
12
How well is the SSL/TLS handshake protected against modifications?
3
What are active research topics in SSL/TLS?
1
Why client certificate at TLS handshake at all?