How does the attacker know what algorithm and salt to use in a dictionary attack? 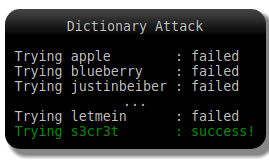 How are plaintext and hashes compared?

During the brute force attack, words from the dictionary are hashed with the correct hash algorithm and salt, and then compared to the hash in the database dump. So the attacker needs to know not only the hash value itself, but the algorithm and the salt.

How does the attacker know the salt?

The salt is generally stored in the database right next to the hash. In fact, it needs to be. How else could the web server hash the incoming passwords when checking them? So if you have a database dump, you have the salts.

How does the attacker know what algorithm to use?

This can be done in a number of ways:

Not the answer you're looking for? Browse other questions tagged hash brute-force password-cracking salt dictionary or ask your own question.

54
Is it bad practice to prefix my hash with the algorithm used?

5
Can I brute-force a password hash even if I don't know the hash-algorithm used?
2
My friend hashes passwords with SHA512 algorithm without salt. How do I convince him that he needs to add salt?
1
By how much does the addition of a salt slow down a rainbow table attack?
5
Dictionary attack knowing the cipher
2
Does having a salted password hash make cracking an unsalted hash of the same password easier?
27
Does putting salt first make it easier for attacker to bruteforce the hash?
0
What is the plaintext password of 'hash part 1' in the shadow file?
2
How can I use a unique salt for each user