Skype opens base64-encoded JavaScript. What does it do?

I just came across a rather unusual problem, and I cannot figure out if it actually is a problem (or even security issue) or not. Upon opening Skype on MacOS, a popup window appears (multiple times, but with the exact same content), asking to choose an application for opening the following: 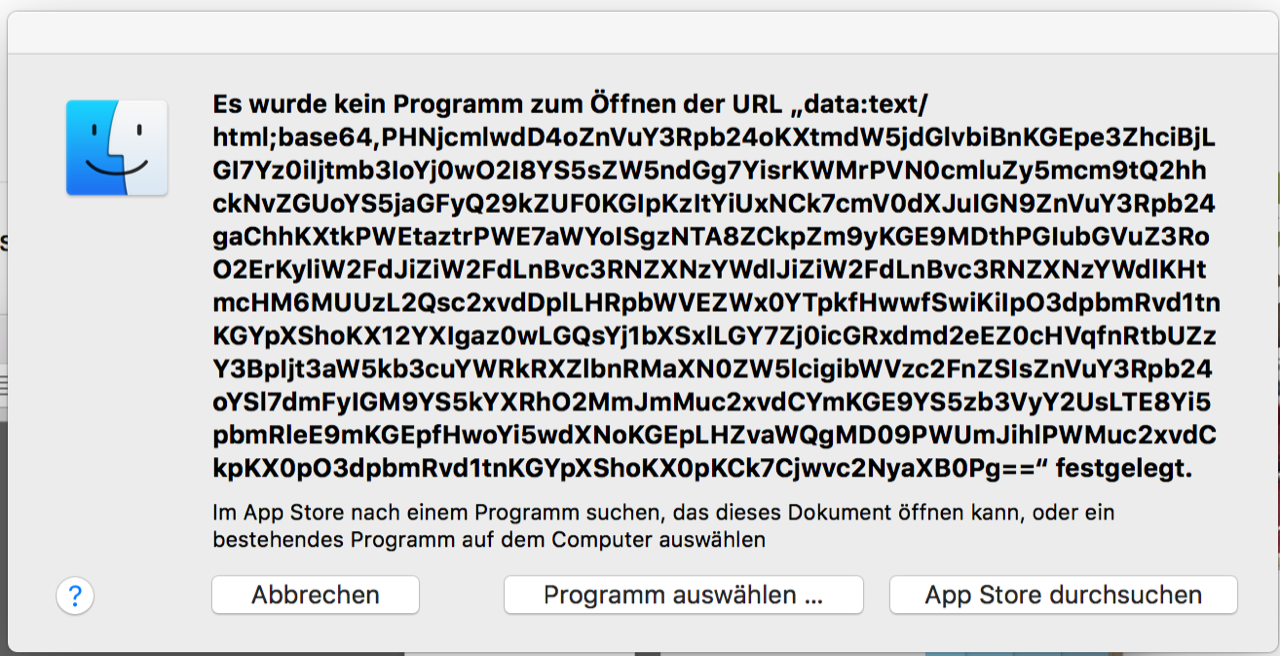 Decoding the base64-value reveals a JavaScript snippet inside a script tag, which leads me to believe that Skype is trying to open this script inside a browser. Here is the complete value, beautified for readability:

I reverse engineered this Snippet a little bit. As far as I understand, it listens for the message event on the window object and then updates some values. It also repeatedly calls requestAnimationFrame, where the messages are posted from.

What is this code doing? Why is Skype trying to open it?

I started by renaming some variables to make things a bit more understandable:

This is the first function, when we run the obscure string pdqvgvxFtpuj~tmmFscpi through it, we indeed receive the word requestAnimationFrame as demonstrated in this bin (alertbox ahead).

The h() function bothered me for a bit, so I started looking around for reasons people use the requestanimationframe function.

That's when I found this page:

Limiting the frame rate while using requestAnimationFrame can be a common want especially when coding Games where you want your animations and mechanics to not exceed a particular mark of frames per second. Let’s go through 2 ways of doing it.

The first way the author describes is through setTimeOut, but then he writes this:

Ok, browsers cannot optimize setTimeout or setInterval. So it’s kinda better to do our own calculations and restrict the frame rate. Let’s see how.

And then he proceeds with the following code:

Which does look a lot like the calculations that are being done in our code.

But why does this show up in Skype without me doing anything?

Because browsers and Javascript are literally everywhere. I just started Skype and it didn't give me an error, but it's showing me ads. My gut tells me the embedded browser that loads the ad has no handler for data URL's in your case, which is why Skype appears to give that error.

If ads exceed or go below their display time on 1 000 000, 30-second impressions, a 10 ms difference can scale incredibly fast and thus give your advertisers less or more displaytime than they pay for.

But why is it obscure?

As per @dandavis comment, there indeed is no appearant reason to obfuscate this code, it's available freely on the internet (like i linked above). However, the same embedded browser that is executing this code, might as well host a login frame for example.

We're not going to rewrite a handler for both obscure and non-obscure code when it's much easier and less bug prone to just run all code through an obfuscator if we need it once.

Chances are likely to me that the reason this is obfuscated is just a General Rule: Obfuscate all JS Code.

Not the answer you're looking for? Browse other questions tagged malware javascript reverse-engineering skype or ask your own question.

3
Does Skype compromise my system (beyond the scope of calls/chats)?
1
Skype is doing funny things when I type or click, does this necessarily mean malware may be in my computer?
12
Advertisement on Skype tried to download a file to my computer using Javascript
3
Does Skype use audio watermarking?
2
Does Skype encrypt IP destination?
0
CSP allowing Base64 encoded images without unsafe-eval