Is it safe to use a Windows executable with expired SHA256 certificate but valid SHA1 certificate?

Microsoft's Media Creation Tool to create Windows 10 installation media has a SHA1 digital signature and a SHA256 digital signature (shown via file properties). However, the certificate for SHA256 signature shows "valid to" field as Saturday, February 17, 2018. SHA1 certificate is valid till August 11, though. Windows still shows the signature to be OK and does not complain about running the tool. Is it really safe to run the tool with expired SHA256 certificate?

Although the SHA256 signature has expired, this doesn't necessarily mean that the signature can no longer be trusted, so long as Microsoft has kept that private key safe. The file hasn't been modified to break the SHA256 signature, it's just time for them to switch keys, so Microsoft doesn't have to hang onto and protect old keys forever. It also means that if the key is compromised and it can't be revoked, it will eventually expire on its own.

TL;DR: It's almost certainly from Microsoft, but they should sign it again.

Microsoft executable signing (Authenticode) can use a timestamped countersignature from a trusted third-party to prove that the certificate used for signing was valid at the time of signing. This is to solve the problem that it is unsafe to issue a certificate with a long validity.

So as long as the countersignature is valid (and the original signing certificate was not known to be compromised at the time of signing), the signature can be trusted. This is the status the signature properties window will report at the top: 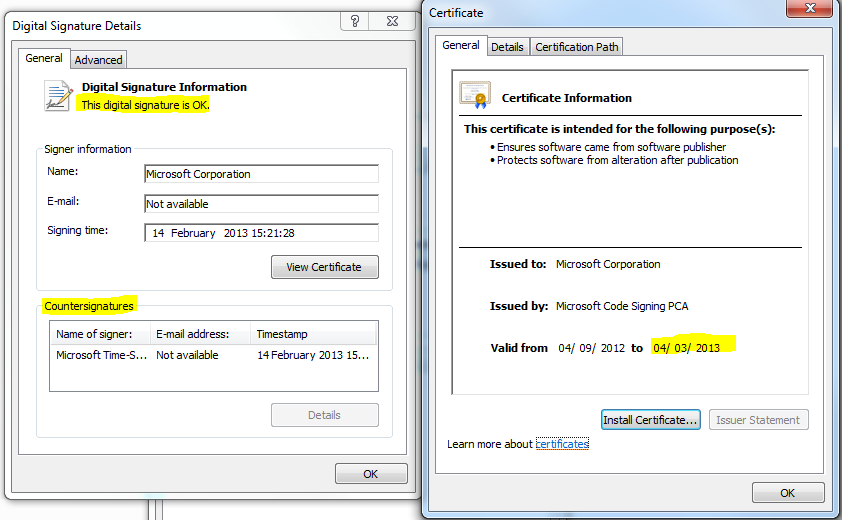 Not the answer you're looking for? Browse other questions tagged digital-signature windows-10 sha256 or ask your own question.