What's a practical example of how volatile information can be preserved in a digital forensics investigation?

I'm taking a study course on CCSP and am going over a section on the digital forensics investigation process. In particular, the instructor discussed the following: 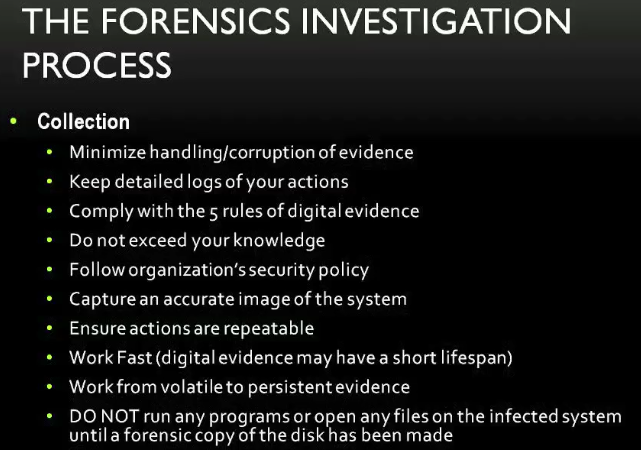 Both of those make sense by themselves but I'm wondering if/how it's possible to capture an image of a system INCLUDING volatile evidence.

Wouldn't I have to shut the system down (or reboot) in order to collect an image? If so, wouldn't I lose a large chunk of volatile information (e.g. running processes, memory, etc)?

From a practical perspective, how can volatile evidence be preserved?

Wouldn't I have to shut the system down (or reboot) in order to collect an image?

No, you can use a validated memory capture tool to collect the volatile evidence in RAM.

If so, wouldn't I lose a large chunk of volatile information (e.g. running processes, memory, etc)?

Maybe, it's really hard to say. Research at Princeton University has shown that RAM fades rather than disappears. Cooling allows examiners more time to collect the volatile data. There are a few other concerns with pulling the plug:

From a practical perspective, how can volatile evidence be preserved?

You need to take a series of steps:

Shutting the system down is closer to the end of the collection process.

Once you that data you can then move on to a deeper dive on root cause and what was tampered with. This often involves changing run levels, dumping/cloning the disk(s) then methodically sifting through memory segments from a core dump and process memory to find modified binaries or even just a modified process running in memory.

Another advanced focus is that of firmware compromise leading to an advanced persistent threat. While less likely, use of a jtag editor to extract a systems current firmware is one of the only methods of ensuring good evidence producing snapshot of a hardware compromise.

Not the answer you're looking for? Browse other questions tagged forensics ccsp or ask your own question.

6
How can you see the device history of a computer when doing forensics?
1
How does one go about network forensics investigation with no prior knowledge?
4
How can a user defeat anti-live forensics software?
6
What's a practical example of encryption “in use” or “in process”?
1
Linux forensics- How can I extract sysfs procfs from a raw image?