This is a Windows 10 Desktop.

This morning I checked our work computer and I noticed a lot of Security Alerts from a Spanish Godaddy Domain trying to use remote login. 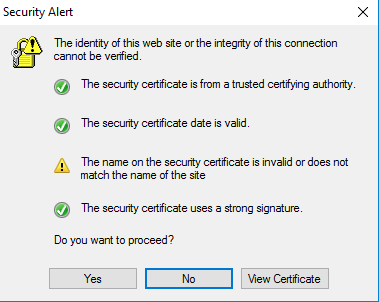 I was unable to get a screenshot of what happens when you click view certificate. It said something about remote login and the domain .santillanausa.com which seems to be a Spanish language learning website.

After opening task manager I noticed a suspicous program named PROGRAM that needed admin rights to be closed and I can't click on properties.

After IT disabled PROGRAM this Security Alert has not arrived.

I was unable to get a screenshot of what happens when you click view certificate. It said something about remote login and the domain .santillanausa.com

I'm pretty sure that hxxp://santillanausa.com/ is not trying to remote login. My guess is that someone stole their certificate. I'd appreciate if anyone is aware of any exploits like this.

UPDATE: It was scanned with Malwarebytes antivirus and it says there are no viruses. This makes me very nervous because there is obviously a virus on the drive.

This will probably sound like a vague answer, but without further analyses of the suspect program/executable, its activity done on-system, packet captures of the suspicious network traffic, etc., this is the 'best' answer I can come up with.

Without more detailed dissection and analysis, it is not possible to give you a definitive answer for your first question of "Is disabling the program enough to mitigate the security risk". However, typically just 'shutting off' the suspicious program is not enough to stop the core cause of the risk; without more in-depth analysis, however, to say whether this is enough to disable the security risk is pure speculation (and more often than not it is safer to assume "No, this is not enough", from my experience).

However, this is not the right question to be asking. The proper question that the IT team (and/or any relevant information security officers or teams) should be asking is "How did this program get there?" This question is important because if it is a program installed by an end user that happened to have admin privileges, that's one thing. If it's a program that got in there without anyone's knowledge, then you have enough to suggest that there may have been a breach somewhere - whether a user went to a site that exploited a vulnerability in the specific system or not or whether the system was hacked into by an external source or not is still to be determined.

As to your second question about whether a known Windows 10 exploit/attack vector was used to get this program to run in your environment, we can't answer that. Any statements saying "yes" or "no" are pure speculation, and cannot be backed by any evidence. Such evidence would be gained through analysis of the system to determine any suspicious network traffic to/from the system, any suspicious remote logins, suspicious system calls, etc., of which we can then use the data found in those investigations to determine whether or not a "known issue" was exploited or not.

As a whole, therefore, the best thing I can say in answer to your questions is this:

Disabling the program or service, alone, is probably not enough to mitigate the risk. However, this is not a certain answer, and without more in-depth analysis the best conclusion I can give you is that there is a potential security risk of unknown scope and risk factor on the system in question, of which additional analysis of the program's activity and behavior can help to determine such scope and/or risk factors.

If I absolutely had to make recommendations to your IT team, then it would be these, to start:

But these alone are not fully-informed suggestions backed by evidence, and are more 'general' suggestions that many in the Information Security field will be giving you in response to any suspected breaches or infections; in each and every case, deeper, more in-depth analysis of the affected system and suspect executable/program is necessary to give any truly informed recommendations.

Not the answer you're looking for? Browse other questions tagged network certificates malware remote-desktop or ask your own question.

2
How to use 'key material' so that multiple people can access protected files?
19
Chrome SSL Warning: “You cannot proceed because the website operator has requested heightened security for this domain. ”
6
Strange 'agetty' process running on my VPS.
34
Digging into DDoS attacks (includes hostile IP's from multiple honeypots)
2
Password manager login with compromised certificates
2
Safest method for self-signed certificates on client?
2
Once a certificate has been validated, is it safe to string-match on the issuer field?
1
How to identify malicious Wordpress user agents