How are private keys distributed safely?

I am going through the RSA algorithm and I have a few questions.

My understanding of RSA Algorithm: 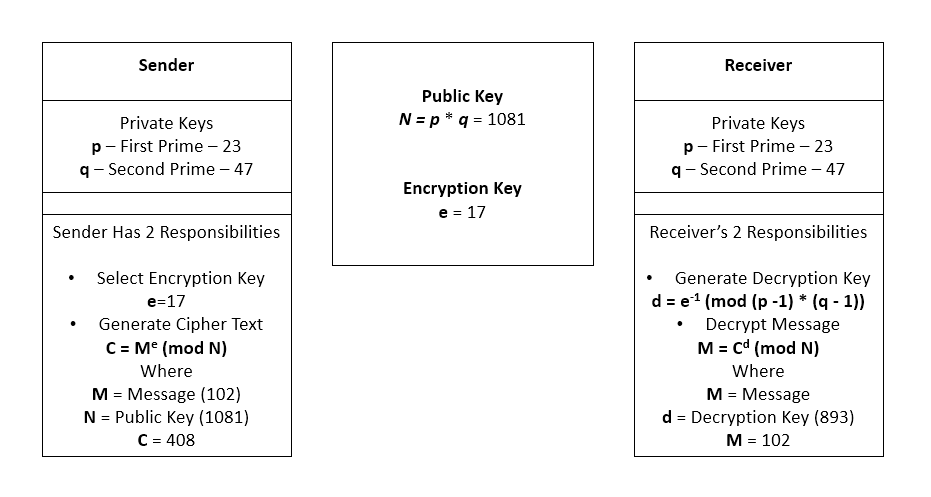 How does a receiver get his private keys P and Q?

For a particular public key, if every receiver has the same private keys then one malicious receiver can decrypt any message that is intended to send to other receivers?

This image is confusing. The private key of the sender is different from the private key of the receiver. These keys are private, so not even the proper sender and receiver know each others private keys. They are not distributed at all, only public keys are. I don't know why this image portraits them being the same. Also there are two public keys. One for each private key. You should probably find a better image.

Each one of the endpoints have it's own pair of keys a private and a public one, what is shared is just their public keys, each one have the other's public key, uses it to encrypt the data before sending it.

for addition: Generally RSA or asymmetric encryption algorithms are not used as a standalone algorithm, they are used just share a symetric session key, and here is how it goes : suppose that there are two endpoints A and B,

A, generates a pair of keys a pirvare and a public one, sends the public one two B.

B, generates a symetric session key, encrypt it with the received public key, and send it back to A.

The private keys are not distributed. Each actor (in this case the sender and the receiver) generate a (public key, private key) pair, and then share the public one.

Thus, the private key doesn't need to be distributed safely, because it doesn't leave the computer on which it was created.

(your picture is wrong, sender and receiver have different p and q values that make their keys, which affects the rest of the formulas)

Not the answer you're looking for? Browse other questions tagged encryption rsa decryption asymmetric or ask your own question.

1
Help to understand secure connections and encryption using both private/public key in RSA?
2
Making a bitcoin-like secure mail protocol, how to tackle public keys?
0
Why no one makes a message application like whatsapp using RSA keys?
1
Private messages for an ios app - how secure is this system?
0
RSA: Do private keys have to be private?
0
How does digital signature algorithms work in a private / public key environment?
6
When should I generate new public & private keys using RSA?
3
How does the digital signature process work?
2
How does algorithms ensure public/private keys uniqueness? - RSA
1
In PubKey Encryption, can a secret encrypted by a public key be validated by same public key?