In the wake of the recent Mat Honan story I decided to try out two-factor authentication on my Google account. But in order to keep using it with Exchange, the Android OS, Google Talk and Google Chrome you have to create application-specific passwords.

Summary of the procedure 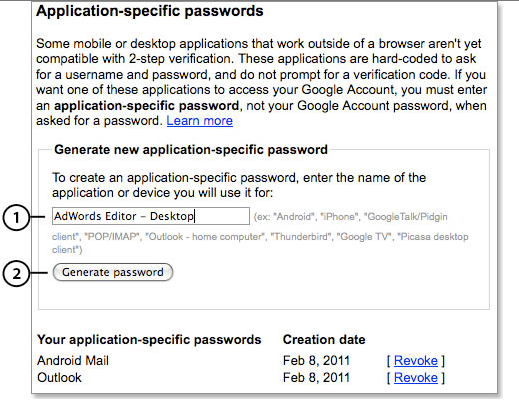 Let me get a few things straight. Do I understand the security implications of application-specific passwords correctly?

Assuming that I want to keep using features like IMAP access (which would force me to make at least one app-specific password), would I be better or worse off using two-factor authentication?

You wrote (emphasis mine):

The higher the number of application-specific passwords the higher the chances are of a brute force attack succeeding.

These passwords have a fixed length and don't contain numbers or symbols, which make them more susceptible to brute force attacks than a password with unknown length containing letters, numbers and symbols.

Short answer: Not in any practical way.

If the password is chosen randomly with equal probabilities (we have no reason to believe it is not the case), the odds of breaking the password by brute force are negligible, even if Google does not notice the attack and does not take any counter measure.

Even with 100 application specific passwords for one Google account, there is no way anyone would try this attack. The "susceptibility" to brute force attacks is zero.

And it is much easier on many smart phones to type a password made of only lower case letter than a combination of letters and digit or mixed-case letters (for the same number of possible passwords).

Google does not automatically disable app-specific passwords when they are suddenly used out of their expected context (e.g. to access e-mail even though it was set up for Chrome sync).

That is the only real security issue here.

Here is what happens when you try and login to change your account settings using an application specific password: 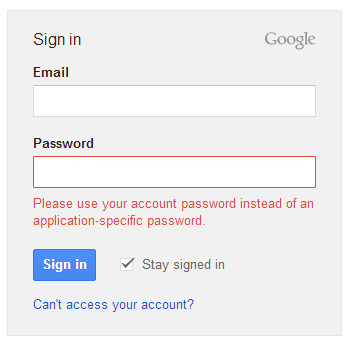 This is better than not enabling two factor authentication as there is an added layer of protection.

As you can see from your pictures, you can monitor the activity of the app-specific password. If anything is out of the ordinary, you can revoke access of the password.

Enabling two-factor authentication by Google has no downsides, except for the slight inconvenience of having to reach for your phone or generating a new app-specific password when you need it.

Not the answer you're looking for? Browse other questions tagged passwords authentication entropy google or ask your own question.

11
How does Google not care about "spaces" in Application-specific passwords?
1
Security implications of using a OAuth-enabled password manager
23
What are the security implications of using TOTP for single factor authentication?
3
How to implement application-specific passwords using strong hashes?
2
How to secure Google Account from SIM hijacking & intercepting Two factor SMS codes on the way & still keep it accessible?
2
Understanding how my google mail account was hacked