Accidently opened a phishing email, is my computer infected by malware?

I was looking through my unread emails when I accidently opened a Paypal phishing one. I thought it was legit because I saw in the preview it was from "Service-Intl@Paypal.com", but I got some doubt after noticing the email was full of grammar mistakes and was using shorted links. Looked at some legit Paypal emails I received and those were from "service@intl.paypal.com". So, I definitively opened a phishing email.

I'm really paranoïd about computer security. I usually use virtual machines to surf the web and open such emails on my daily driver OS, but that time I made the mistake and opened that email directly on.

I know that phishing goals aren't usually to infect computers with malware, but now I feel a bit insecure since I usually don't open emails from unknown senders.

I did a drive image, redeployed it on another computer then run MalwareBytes, SpyBot Search & Destroy as well as a McAfee Antivirus scan. Nothing suspicious was found. Drive image was to avoid installing all those antivirus softwares on my daily driver OS since they usually leave some unwanted files or registry entries after uninstalling.

I grabbed a copy of the phishing email (.eml) to inspect it, there was some links like "paypal=objects.com/digitalassets...", few "t.co" shortened URLs (which would actually redirect to the phishing site) and some links from MailChimp, such as "gallery.mailchimp.com/...". Opened the "t.co" links in a virtual machine, currently broken. Note that the email was been in my mailbox since this January, so links were probably flagged way before I opened that email. Some screenshots of that phishing email are in attachment to that question.

Considering all of this, should I format my hard drive then completely reinstall my daily driver Windows to be sure I'm safe from malware which could come from opening that email (without clicking links on) ? Or that doesn't worth it ? 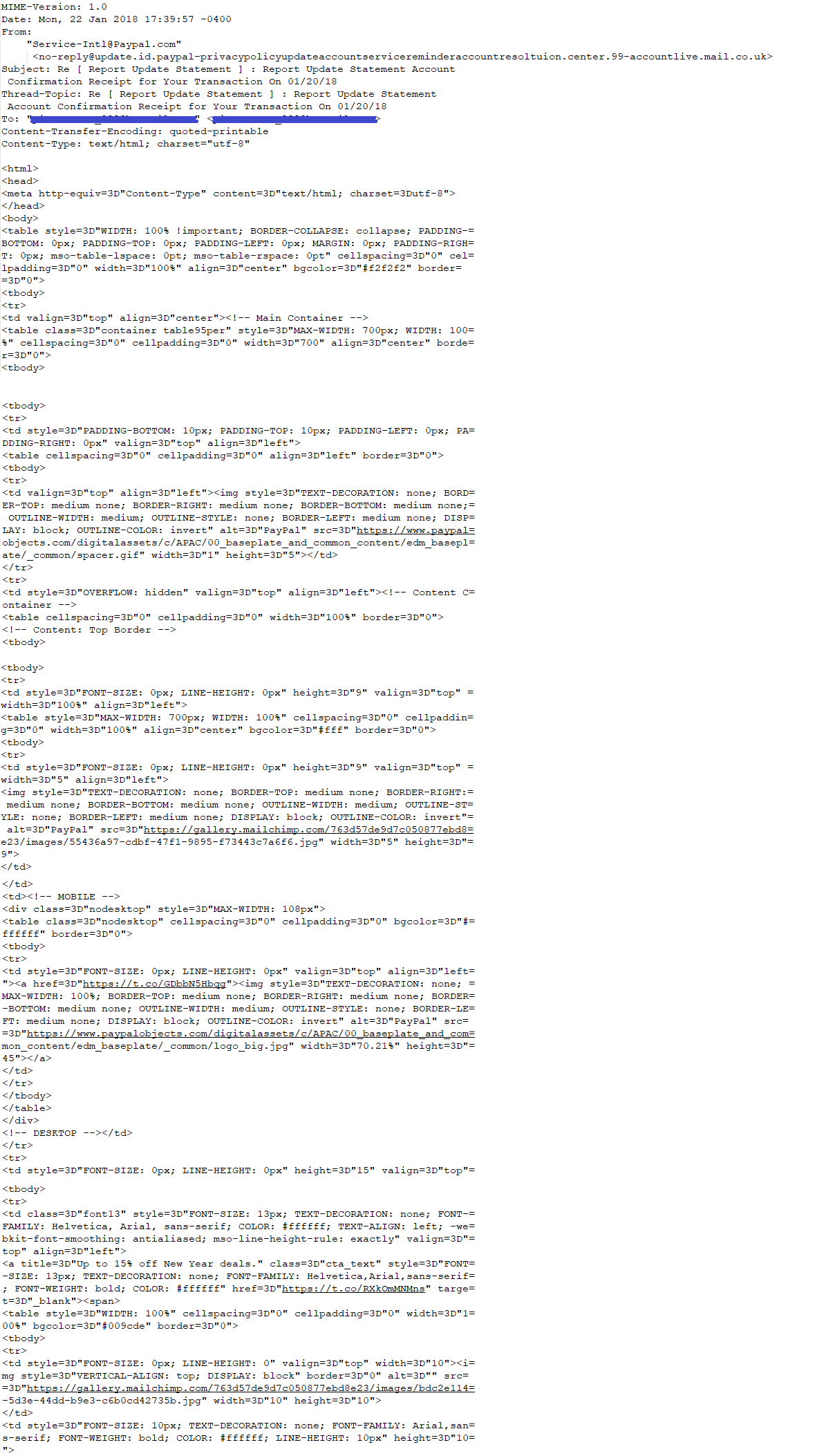 My configuration is : Windows 10 (with all updates), Windows 10 Mail App, Windows Defender

You are most likely safe. As you said, the objective of those phishing emails is to trick you into believing their website/email is legit so you interact with them and give them your data. The chances of them injecting malware on your computer that can run without being executed and not being picked up by all those AV solutions that you used are minimal.

That being said, the real problem here is your options. You can not claim to care and worry about computer security and have your email auto load remote content. You should turn it off immediately. Most email attacks, other than phishing, rely on 3 things that you are absolutely under control.

Not the answer you're looking for? Browse other questions tagged malware email phishing or ask your own question.

198
Don't understand how my mum's Gmail account was hacked
6
Is this Facebook email real or phishing?
2
Email phishing scam asking customers for card details
3
Received an email about an "Etsy" Password Reset due to the "Linkedin Breach...." is this a phishing attempt?
3
Legit zix email vs phishing
5
Is this email from OneDrive a phishing attack?
45
Is it ever safe to open a suspicious HTML file (e.g. email attachment)?
1
Can opening a blackmail/phishing email on outlook cause issues?
0
How does this scam email from a seemingly legit domain work?