Will password complexity requirements increase or decrease security given a haveibeenpwned check?

Given that you check that a password is not a common password and not present in a db with compromised passwords, will password complexity requirements (e.g. at least 1 lowercase and 1 uppercase character and 1 special character) reduce security by reducing the search space without any benefits?

Note: Assume that passwords are hashed using bcrypt with a cost around 14-16.

Wanted to post my own reasoning in the question as I have given this some thought and the reason I am posting this as a question is to check my reasoning. For all I know this answer might get downvoted :) .

I mean, the general argument - as I understand it - is that password complexity requirements require the user to choose a password from a greater 'space', thus decreasing the chances of picking an unsafe password as a lot of unsafe passwords are only lowercase alpha (though clearly not all, such as Password1!).

When something like haveibeenpawned is checked that is an improved check removing the large majority of the "unsafe password"-space. Instead of considering all lowercase alpha passwords unsafe, it instead uses actual data to determine which passwords are or are not unsafe (the set of compromised passwords is assumed to be extremely similar to unsafe passwords). Combining both complexity rules with a compromised password database check thus primarily eliminates the 'secure' part of the lowercase alpha space, blocking safe passwords which are caught by password complexity rules such as passphrases (e.g. catwindowlightpencil). 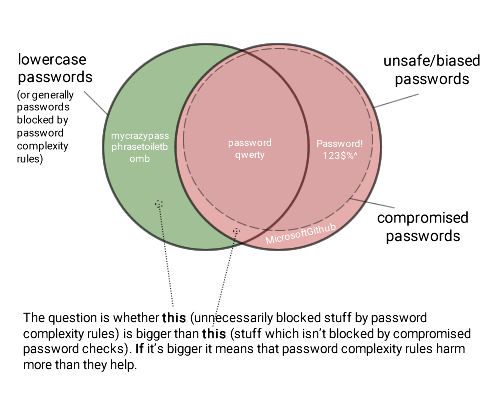 Note: Obviously new 'dumb' passwords can be 'created'. For example, a new pop idol might become popular during the past week or Microsoft might buy Github, but not yet show up in a compromised password database. Similarly someone might use a product name as a password of a product that has not been compromised yet.

Will it reduce the search space?

Yes, but only an extremely small fraction of it will be eliminated: let's assume we consider k characters, of which 26 characters are lower case. Let us consider a password of n characters. The fraction of the search space that is being overlooked by rejecting lower case passwords would then be (26/k)^n.

Will it reduce security?

No, it will not, because the search space is virtually unaltered. The complexity of your password is still O(k^n).

*admitted, not all of them are suited for typing in a password, but most of them are

16
How does varying character type increase strength of password?
15
Do password complexity requirements reduce security by limiting search space?
4
Ethical brute force demo on a web login when knowing the password complexity requirements
4
What makes one random strong password more resistant to a brute force search than another
1
Password policies for randomly generating passwords
6
Can password strength be enforced with PAKE protocols?
3
Is password strength exclusively a function of character set size multiplied by password length-in-characters?