The author of this blog post Never trust SMS: iOS text spoofing says that: The sender of an SMS message may provide arbitrary sender information using low level protocol features. Furthermore the sender may set a header, to indicate, that replies should be sent to a third number.

Apple takes security very seriously. When using iMessage instead of SMS, addresses are verified which protects against these kinds of spoofing attacks. One of the limitations of SMS is that it allows messages to be sent with spoofed addresses to any phone, so we urge customers to be extremely careful if they're directed to an unknown Web site or address over SMS.

My understanding is that Apple is saying this is not a design flaw on their part, but one on the part of the SMS, and the way the payload is designed.

This reaction poses a number of questions:

Apple did not create the SMS standard that was provided to them by the industry. The industry indicated that an SMS transaction can include a reply-to field. Apple has designed their software to use what the industry told them existed (and what industry equipment is compatible with as it relays it intact). As long as Apple isn't using the provided standard incorrectly, they can't be to blame. If a reply-to field is included, and is different than the from field, what exactly is the purpose of the reply-to field if not to prevent you from sending the SMS to the "from" originator? What would everyone expect behavior to be exactly?

An example: Apple builds computers. My Mac Book Pro (running OS X 10.8) can be fooled by a spoofed MAC address. Is that Apples fault? My MBP can be fooled by a spoofed IP address. Also Apples fault? No in both cases, the IP stack was designed long before Apple had anything to do with networking computers. MAC control being spoofed is not something easily detectable (unless you know for sure what MAC address you should expect to see). Apple is using provided standards.

I'm of the opinion that @blunder can not compare SSL (a known secure system) to SMS (a known insecure system). Telnet is an unsecured communications medium and would be a closer comparison. How many computers pop up a notification that says, "Are you sure you want to use telnet, it sends passwords in cleartext?" Is Apple liable because OS X doesn't have a popup that notifies someone trying to use telnet that it isn't secure?

My turn to ask a question. Why are we bent on finding excuses to make Apple fix this, instead of having the cause of the problem (the SMS standard) fixed? Why is fixing the symptom logical when you can cure it at the cause (the carriers)?

The blog post you link to seems to imply that this is a design flaw that could reasonably be called Apple's fault.

I have no first-hand knowledge, but if the blog post is correct, then this does sound like a design shortcoming in the iPhone that could be fixed by Apple, simply by always using the "from" field as the sender and not allowing the "reply-to" field to override the "from" field.

TECHNICALLY, it is not Apple's problem, indeed.

What is "Apple's problem" ? It is something which in some way prevents Apple from pursuing its ultimate goals, which can be summarized as "making a lot of money". There are two main classes of "problems" for a big company like Apple:

The purported Apple stance ("the problem is in the standard") can be interpreted as a "bring it on" from Apple's lawyers. Their defense is ready. Their shields are up. So, no problem to Apple that way. Similarly, blows to image can be deflected by using the time-honoured tactic of designating a scapegoat, in this case the SMS standard. Image-wise, Apple looks like the White Knight: they do offer a "better" way (the iMessage) and can easily look blameless in the matter.

What this all amounts to is that Apple is big enough to define reality. The world of technological gadgets is sufficiently malleable and magic-looking that a big player can tell things what they are, instead of being told what things are. Indeed, Apple's substantial treasury has been built by Apple doing just that for more than a decade. SMS from/reply-to are not Apple's problem because Apple says so. I see no reason why they would stop doing it, and I see no reason why this strategy would fail them.

(Notice that I am speaking from the technical point of view; I am not talking at all about ethics.)

It's worth noting that it is possible to fix the issue without breaking the standard. Here's an example of what an alert might look like that does not break the SMS standard, but warns the user via a security alert message: 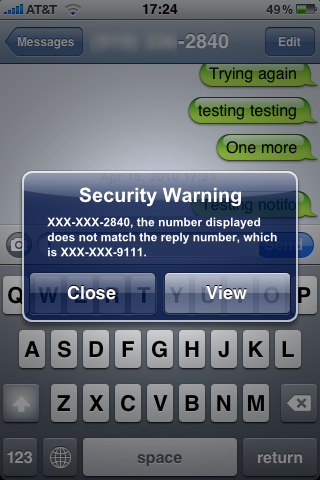 Not the answer you're looking for? Browse other questions tagged authentication sms or ask your own question.

2
Retrieve header from SMS on iPhone
11
Is Twitter digits login (sms auth code) insecure?
5
SMS: Apple has detected multiple failed login attempts
67
Are there any security risks in replying to an SMS message?
3
Is it normal to receive working SMS verification code from strange number?
1
Reply to a spoofed SMS message
1
Can SMS messages be traced when they come from a computer?