What is the XSS auditor in Chrome/Firefox and how do I find bypasses?

I've been doing a lot of bug bounties lately and although I've been gaining reputation and experience, I never seem to find XSS even in private programs. Items are always being reflected as HTML.

It seems unlikely that all of these companies are properly sanitizing characters and after doing some research I think this could happening because of XSS auditors in Chrome/Firefox? I've seen mention of bypasses on twitter, but I'm not entirely sure how to find them, or how to easily identify what's still relevant.

It seems unlikely that all of these companies are properly sanitizing characters and after doing some research I think this could happening because of XSS auditors in Chrome/Firefox?

Chrome's XSS auditor does not actually render the payload harmless, it throws a warning preventing the user from accessing the page. 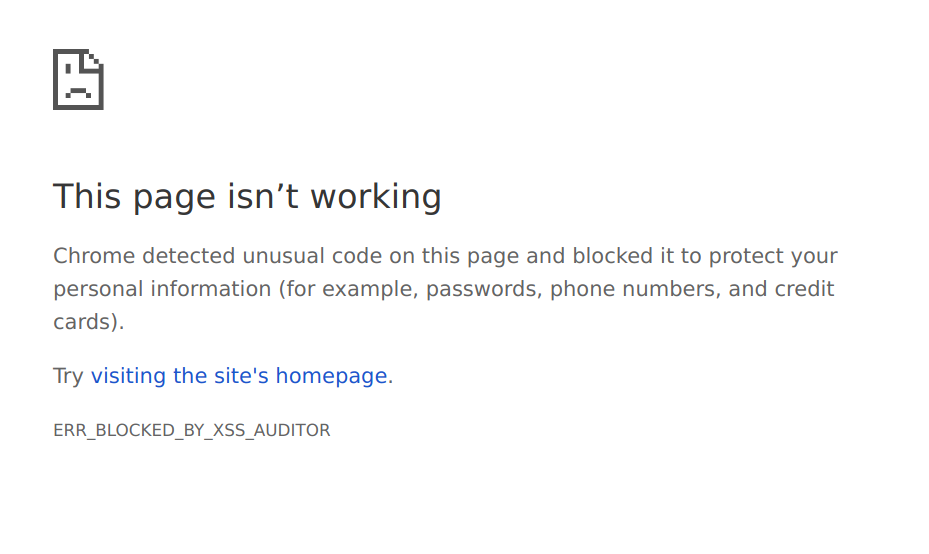 If you check the source code when you get a warning, you should see that the XSS payload is highlighted as seen in the example below.

From personal experience with participating and running bug bounty programs, you do not normally need to demonstrate an XSS auditor bypass in order for your report to be valid. In my opinion, it is not a good idea to rely on the browser's auditor, especially since not all browsers come equipped with an XSS auditor (e.g. Firefox) and new bypasses are found all the time.

As stated above, Chrome's XSS auditor will only throw a warning. So if you see the warning shown above, you might actually have a valid XSS vulnerability.

Most of the bypasses that you see online require a specific context for the payload to actually work. That being said, there have been universal bypasses in the past as seen in the Chromium issue tracker. Bypasses can be discovered via fuzzing, general experimentation, or purely by chance. On top of that, some bypasses are discovered by altering a previous bypass (See https://bugs.chromium.org/p/chromium/issues/detail?id=709365 and https://bugs.chromium.org/p/chromium/issues/detail?id=738017).

In future, what I recommend doing in order to make sure that the XSS auditor never kicks in while you are hunting, is to simply fire up Chrome using the --disable-xss-auditor flag.

If you are interested in learning more about browser XSS filter bypasses, I highly recommend taking a look at "Browser's XSS Filter Bypass Cheat Sheet " by Masato Kinugawa.

Not the answer you're looking for? Browse other questions tagged xss reflected-xss or ask your own question.

2
How do web browsers detect XSS attempts when the X-XSS-Protection header is enabled?

0
An XSS attack is working on Firefox but not on Chrome..Suggest changes to make it work on Chrome
3
Mitigating reflected XSS in node/express requests for static assets
3
Is it worth notifying companies about reflected XSS that gets filtered by the XSS auditor?
4
What specifically is "potentially dangerous" about an ampersand in a URL
6
Is there any possibilities to bypass Chrome xss auditor in this case?
0
How does OWASP ZAP find Reflected XSS?
0
XSS triggered but chrome didn't show popup. What exactly was going on?
6
What was the real reason for dropping reflected-xss directive from CSP?