I'm trying to figure out how to add an extra security layer to my WebApp cURL calls going to my API Engine.

I have a WebApp that sends data to an API engine I made.

My API will have access to the filesystem and therefore has to be quite secure so that there is no way someone can execute a script on the server.

The idea I had to further secure it si to have a salt on the WebApp and the same one on the API engine, the WebApp will send the cURL with an hashed timestamp and the real timestamp, plus any other request, example:

On the API side I will check if auth is equal to the sent timestamp hashed with the API hash (which is the same as the WebApp one).

This way if the auth is copied and send with a new request will always fail as timestamp updates. I made a little graphical example to better understand. 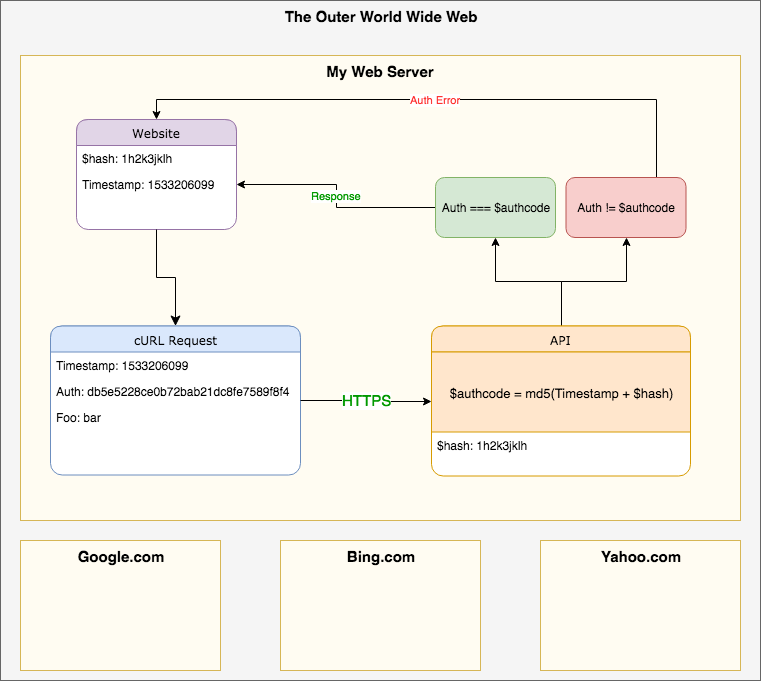 There is a point, if "the man in the middle" can copy the auth can also copy time and can send requests always with the same time and auth.

So I'm wondering how to solve this part as on the API side I don't have a DB to check against "already used hash".

I'm in doubt I'm probably trying to reinvent the wheel and for sure this kind of stuff has already been checked/handled.

The only point is that I do want the "standard way" but I'm trying to add extra security so that a possible hacker does not know what's on the other side.

Any advice? Also, any better idea?

I would go the exact opposite way. Put the code on github, let people fork it, send pull requests, change the code. It evolves. If you made a critical mistake, someone will notice and inform you.

And use TLS. There's a great community behind it, there are bugs, but they are so obscure most of the time that we mere mortals don't need to be worried. Misconfiguration, programming errors, logic errors and code injections are way more prevalent and exploitable than TLS bugs.

If you want to implement replay protection, use an increasing nonce. This way the server will only need to save one value - the last used nonce, and the client will have to increment it before every request. It does not need to increment by one, it can be incremented by any value. In some API's I use, the nonce is the Epoch (plus milliseconds).

API's are meant to be simple. Don't add any mechanism if you don't need to. Adding components increases complexity, reduces performance, and it's one more thing you need to update from time to time. Keeping only essential parts reduces this burden.

Not the answer you're looking for? Browse other questions tagged curl or ask your own question.

3
Mod_security for Apache2 blocks cURL!
3
Preventing spoofing of remote server with PHP & cURL
5
Is there any effective server-side prevention technique against PHP-aided CSRF?
1
Are there risks to allowing cURL from my machine?
35
Is it insecure to send a password in a `curl` command?
0
How to securely host downloadable source code
3
Sending a reverse shell command through the drupalgeddon vulnerability isn't working