How to determine if a browser is using an SSL or TLS connection?

I want to know whether my browser is using SSL or TLS connection if I see HTTPS.

According to what is described on this blog post, Internet Explorer can display the protocol version information. Just hit File->Properties or Right-click -> Properties, and a window would open, under Connection, you'd see something like:

As of today, Firefox supports TLS 1.0, TLS 1.1 and TLS 1.2. You can see the negotiated protocol version if you click the padlock icon (on the left of the URL), then More Information and then under the Technical Details.

Chrome can display the version. On earlier versions of Chrome, click on the padlock icon; a popup appears, which contains some details, including the protocol version. example: (verified on version 21.0.1180.82)

On later versions of Chrome, this information in the security tab of the developer tools. (Credit to nickd)

Opera shows the protocol version in a way similar to Chrome: click on the padlock icon, then click on the "Details" button. e.g. (verified on version 12.01):

For browsers which do not show the information, you can always obtain it running a network analyzer like Wireshark or Network Monitor: they will happily parse the public headers of the SSL/TLS packets, and show you the version (indeed, all of the data transfers in SSL/TLS are done in individual "records" and the 5-byte header of each record begins with the protocol version over two bytes).

(Edit: I have incorporated some information from the comments; done a few tests myself. Feel free to enhance this answer as needed.)

From Google Chrome version 56 up 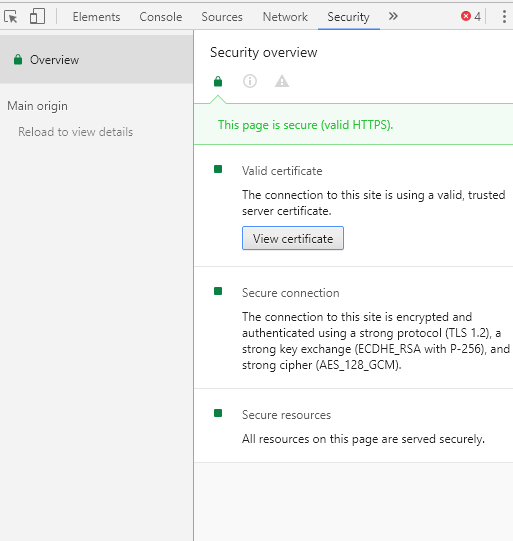 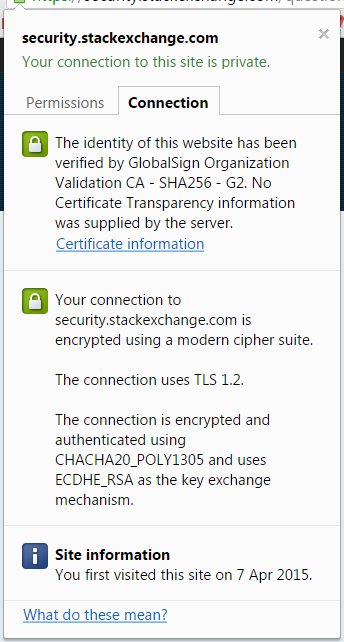 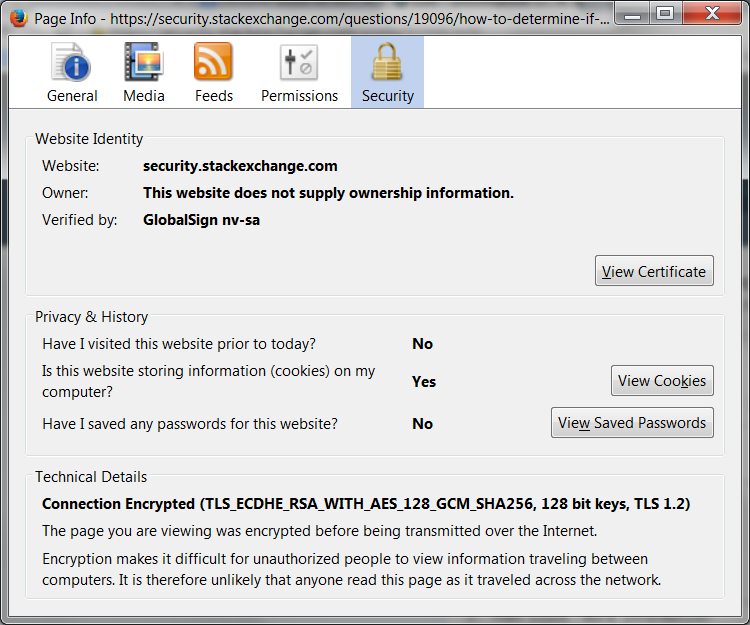 The padlock is to the right of the address bar, but it won't help. Instead 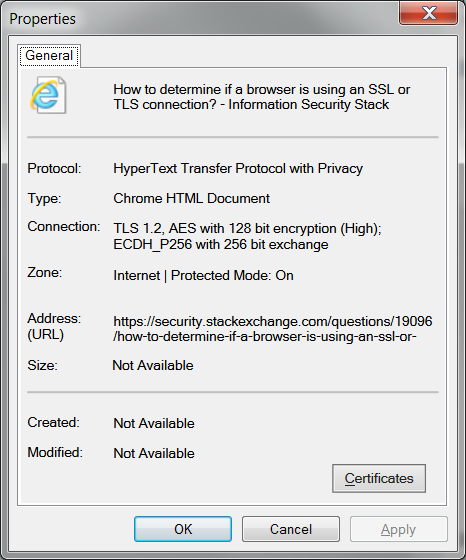 It would be neat if Internet Explorer were consistent with the other browsers. Under the padlock indicator is sensible place to look.

I am still unable to find add-ons or extensions to check ssl protocol version directly from browser session. But what I found is here.

This site use openssl to get extensive information. http://www.serversniff.net/sslcheck.php

2
How to find out Protocol used for web communcation (SSL vs TLS)?
2
What number of bits does a browser use to generate a key?
1
Browser and SSL support

5
Why does Safari seem to be accepting an HTTPS connection every other browser rejects?
1
Browser and SSL support
8
How do browsers negotiate SSL/TLS connection parameters?
1
Viewing SSL/TLS keys on the browser
19
Determine SSL/TLS version using Wireshark
6
Why/how does Firefox bypass my employer's SSL decryption?
0
How to prevent TLS downgrade on client side?
0
How to know whether mysql connection is using SSL or TLS connection?