What can be recovered? Securely deleted files

I’ve recently got into a little trouble and need advice. It seems I may have inadvertently downloaded a illegal file from a p2p network (along with 100’s of other legal files). I was certainly not aware of this nor have I viewed anything like this (!). As a matter of course I always use Cyberscrub to delete files (7+ overwrite) and also I have run the wipe free space option (again 7+ overwrite). So the file (if it existed) will have been deleted this way. I am concerned the one file might have been stored somewhere else, or it can somehow be pieced back together. Also I am concerned where the file name may be stored and if the measures I took would delete it are enough. It was through p2p so I’m pretty sure I don’t have to worry about internet cache. But what about other caches? I also regularly use cccleaner for my internet activity, mostly secure banking etc Does this clean cache and what about thumbnails (??). I am most concerned about the recovery of the file via forensics, even though I don’t recall ever downloading and viewing such a file. Any information / advice would really be appreciated as I am worried sick !

Edit also I have been told by police that “they went to the date of the offence from information given and found a file name matching they one they were looking for”. It doesn’t look good ! Cyberscrub deletes the file and also changes the date of creation, changes the file size etc So if it’s true what they say how could this happen? Where did that information come from on my computer? I asked for the full name of the file and they said a long line terms that the file name supposedly contained. Where did they get this information? Am I being set up?

There's a lot of questions rolled in there. I'll try to answer a few of them.

This became a bit of a ramble.

TL;DR Secure erase programs like the one you describe worked well on old magnetic disks, but SSD and hybrid HDD/SSD drives work today are more complex and while some drive manufacturers provide secure erase functionality, there are really only two reliable ways to securely delete a file:

1) Select "Full Disk Encryption" in your OS (ie before downloading any suspicious files), and then if you reformat your disk using a different encryption password, the original files will be unrecoverable encrypted blobs. 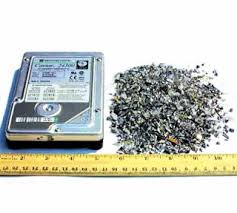 Unfortunately, I think you have a old notion of secure deletion. We need to take a detour into how hard drives work. For an even longer read, see wikipedia.

We're going back to the late '80's / early 90's: magnetic tapes and hard drives write data in bands (think vinyl record). As technology increased over time, these bands got closer together, but in the early 90's there was enough unused space between bands that high-precision magnetic equipment could read residual magnetic fields of data even after it had been written over. You'll see in that wikipedia article that in the 90's, NIST / DoD recommended 3, 7 or even 35 passes of zeros or random data to fully wash out all magnetic residue leaking out the sides of the band.

You'll also see that in the mid 2000's that dropped to 1 round. Why? Because hard drive manufacturers were packing bands so tightly that there was no unused space between the bands anymore and one pass of zeros was sufficient. Good news.

Then came SSDs Solid-state drives have a limited number of times each transistor can we written, so to increase drive lifetime, they do a thing called wear leveling which essentially means that each time you write to a file, it writes a new copy of it somewhere else on the disk and flags the old one as "unused space" so that each sector gets an even amount of use. This has the unfortunate side-effect of leaving many copies of each file scattered around the disk. Wear leveling is done at the hard drive firmware level, so even the OS can't do anything about it. As @James009 said in comments: "So basically if I wipe an SSD then it will start wiping the drive, but it will place the wiping data (the 1’s and 0’s) in places where there is less “wear” and not wipe through the drive."

Our results lead to three conclusions: First, built-in commands are effective, but manufacturers sometimes implement them incorrectly. Second, overwriting the entire visible address space of an SSD twice is usually, but not always, sufficient to sanitize the drive. Third, none of the existing hard drive-oriented techniques for individual file sanitization are effective on SSDs.

Bottom line: I Don't think of SSDs the way you think of RAM or traditional hard disks -- concepts like "used space", "unused space", "overwriting a file in-place" etc. Instead think of an SSD drive like a database server with their own CPU that stores and returns (address, data) pairs and does all sorts of black magic optimizations about how that's physically stored on disk.

There are some techniques that are effective for sanitizing SSDs, but they usually rely on the drive having a secure erase command, or on other physical characteristics of the drive. The only method that's guaranteed across all manufacturers is to only ever put encrypted data on the drive.

Since 2014, NIST (in SP-800-88 Rev. 1) have deemed that zeroing out data is only applicable to magnetic media and recommends instead "cryptographic erasure", which is fancy speak for "use full-disk encryption, then you can safely destroy or format the disk simply by forgetting the encryption key!"

Unfortunately this means you needed to have disk encryption turned on before the file was written. Basically, make sure that every piece of data handed to the SSD is encrypted, because once it's there's a chance that it'll be there forever :(

There are actually a pile of good answers to this question already. I should have searched before sinking my afternoon into writing an answer :(

P.S. I have never used any of the tools you mention (cccleaner, cyberscrub, so maybe somebody else can speak to those)

Not the answer you're looking for? Browse other questions tagged deletion or ask your own question.

57
Can wiped SSD data be recovered?
9
Overwriting hard drive to securely delete a file?
3
How to make information unrecoverable?
4
Safely remove original file after encryption
6
What type of data can be recovered from the swap file / page file and thumbs file
2
Can a full SSD or HDD recover deleted data?

8
Can someone tell if you delete deleted files?
12
Ensure data doesn't linger after being deleted
5
What method could a white-box attacker use to track the deletion of memory / files?
4
How can I securely delete items in a database?
89
Why didn't OSes securely delete files right from the beginning? And why do they still not do this?
6
What type of data can be recovered from the swap file / page file and thumbs file
0
Can the photos/videos I deleted a year ago can still be on my iPhone or on the Internet?