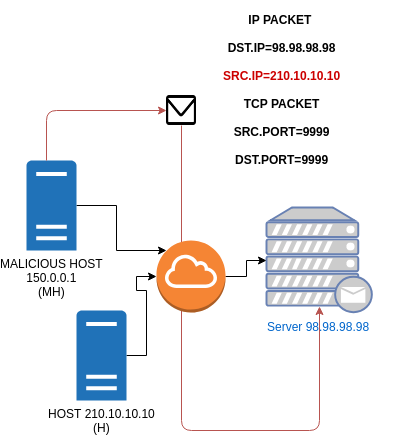 All IP addresses are public, a cloud is symbol for the Inernet.

A packet was received as next packet in connection C.

My question is: Is it possible scenario?

The situation is same as above. However, H and Server communicate by https. MH tries send a HTTP message, as before. It cannot be encrypted because MH does not know a key. So, it cannot be correctly decrypted by a server. Server can find out that a packet is malicious because content is not decrypted to correct form.

Is it the only symptom that packet is malicious? It seems to be slippery.

The "all odds in attackers favor" scenario

Attacker is in the same network as the victim, can monitor the network and can not only eavesdrop the connection, but interfere with it. This is the case when the attacker can execute an ARP Spoofing attack against the victim.

In this case, the attack is possible, and trivial against an unencrypted protocol like HTTP. Attacker can read every packet from the victim and the server, and can alter things when he wants to. He can tell H that he is the gateway, and alter packets going to the server. As he have the entire packet in his hands, he knows the TCP Sequence Numbers, all flags, options, and everything else. This is called Man in the Middle Attack.

Attacker in another network

It's harder than guessing a 32-bit number. In this case, MH must guess the correct sequence number (a 32-bit number) AND craft the injected packet with the correct flags AND correct options AND have his packet reach the server before the package from H. As H and MH are not in the same network, MH will have to employ IP spoofing, and that is almost impossible to execute. As lots of routers have Egress Filtering, they will discard packets with a spoofed source address.

The same constraints as the other scenarios, but with a complication: attacker must forge an encrypted packet, guessing the cypher suite, all the encryption parameters, padding, IV, checksum, and have it merge seamlessly with the next packet coming from the client... No, it's not possible to inject data on an encrypted protocol and expect it to be accepted by the server or client.

Server can find out that a packet is malicious because content is not decrypted to correct form.

No, server find the malicious packet because the TCP sequence number is incorrect, or correct but late (newer packet already arrived), or much above the expected number plus the transmission window. If all those almost impossible to spoof values are correct, and encryption is employed, server will discard the packet because it does not even remotely look like a valid one.

TCP is a complex protocol, so it's actually hard to bypass. Add an even more complex protocol on top of that (TLS/SSL) and you have an impossible task trying to inject spoofed packets on the communication.

Not the answer you're looking for? Browse other questions tagged tls http ip tcp or ask your own question.

3
Why does my TLS v1.2 handshake take 2 tcp/ip connections?
11
Can a TCP connection be terminated by an attacker if SSL/TLS has been used to protect data in the TCP segment?
2
IP Spoofing with real IP when TCP 3-way handshake has been made
0
Web server responding to an HTTP request from a spoofed IP address
0
How can Insertion attack ever work and fool an IDS on a TCP connection?
0
Tool for injecting data in existing tcp connection