How to enforce confidentiality while keeping the authenticity?

Below is an illustration of the digital signing process. 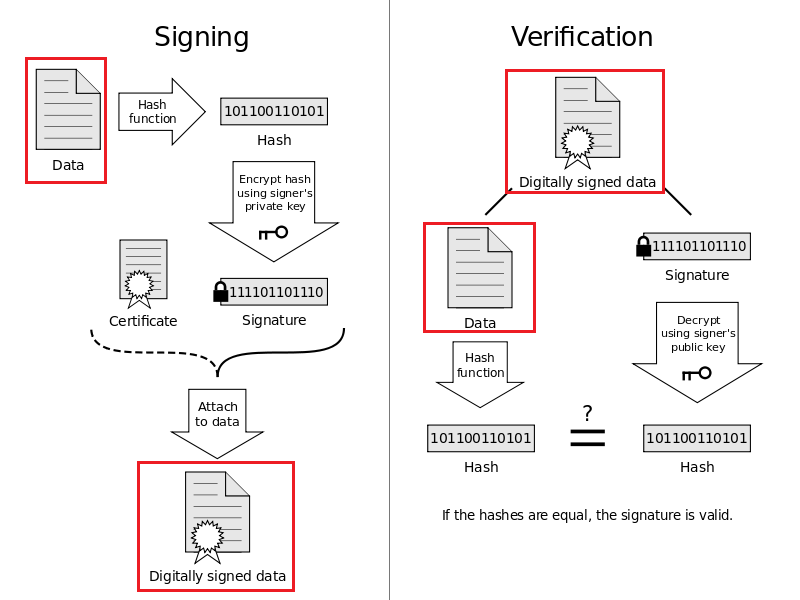 A digital signature is an authentication mechanism that enables the creator of the message to attach a code that acts as a signature.

Then the receiver can:

But what if someone in the middle intercepts the message? He can do all the same as the receiver. Thus the original Data will be exposed. How is this prevented? Is it prevented by using another pair of keys to encrypt the original Data? If so, how is the public key given to the receiver without being intercepted?

So, how to keep both confidentiality and authenticity in a public channel, and with all communications happening only on that channel?

This is a bad diagram. The basic operation isn't inherently wrong, at least for RSA, but thinking of signing as "encrypting" and verification as "decrypting" is going to lead to exactly the kind of confusion you are expressing here. It is much better to think of it this way:

Or, equivalently, you can say the following:

In the question you posed, the MitM doesn't need to decrypt anything, because the message was never encrypted at all! The message (or rather, a hash of it) was signed, so the MitM can't modify the message without breaking the signature, but the message itself is in plain text.

If you want to both encrypt (provide confidentiality) and sign (provide authenticity), you need your private key (for the signing) and the recipient's public key (for the encrypting). That is, before Alice can send a secure message to Bob, she not only needs to generate her own keypair (for signing), she needs Bob to both have generated his own keypair and (verifiably) sent his public key to her (Alice). This is the pattern used by numerous secure messaging schemes, such as OpenPGP (including GPG) and S/MIME (both of which are primarily focused on end-to-end email security).

Another option is of course to encrypt using a symmetric key that you have previously exchanged with the recipient (a "pre-shared key") and then also generate a message authentication code (MAC) using that key or another that you have also exchanged. This MAC might be hash-based (an HMAC, which combines a shared secret key with a secure hash algorithm such as a member of the SHA2 or SHA3 families), or might be derived from the symmetric cipher itself, such as an authentication tag out of a block cipher in Galois/Counter Mode (GCM). However, symmetric keys have no public component - it's never safe to do things like put them into a public certificate - so key exchange is somewhat easier (though still fraught!) when using public/private (asymmetric) keys instead.

Is it prevented by using another pair of keys to encrypt the original Data?

How is this prevented? Is it prevented by using another pair of keys to encrypt the original Data? If so, how is the public key given to the receiver without being intercepted?

The problem of key distribution is fundamental. In practice this problem is solved by using a trusted third party called a Certificate Authority (CA).

The CA is implicitly trusted (because the manufacturer installed its root certificate in your computer) and the CA can sign a web server's (e.g., google.com) certificate to prove that the certificate belongs to the web server.

You can then verify the CA signature on the certificate. This gets rid of the MITM attack because the MITM can not obtain a signed certificate from the CA saying that the MITM is, e.g., google.com.

Authentication is only one part of what you want to achieve. To encrypt a message (and thus keep confidentiality) over a public channel you could use something like a Diffie-Hellmann key exchange. Note that this exchange has no inherint authentication but you can achieve that by "signing" the messages used in the way you mentioned.

Not the answer you're looking for? Browse other questions tagged encryption rsa or ask your own question.