Ad fraud is growing into one of the biggest concerns. How can it affect banks?

The attached image was presented to me, but I'm confused about the risks of ad-fraud to organizations like banks. Usually, the advertisement budgets are invested only in "trusted" sources like Google that probably use very good anti-bot algorithms and of course on-site ads. 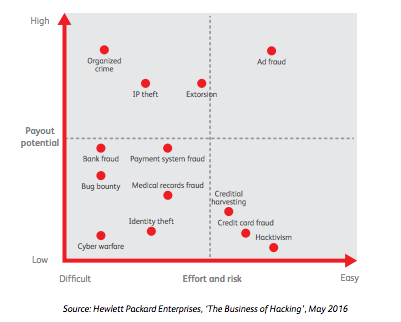 Banks pay for clicks on ads. If they advertise and pay for ad clicks that is not real, they basically lose money and the attacker benefits.

That's why it's effort and risk is low, and their payout potential is high.

I think we're missing a bit of context here, but it is possible it is included here simply because as banks are involved in payments, they may involuntarily become involved in fraudulent behaviour.

As you say, Google and others have a lot of tools they use to combat fraud. One of those tools is checking if a new ad-displaying site/user is not the same as one who was already caught red handed, for instance by checking the bank account used. This means fraudsters will try to open new accounts, possibly using various forged or stolen identities.

They may also open an account, get a payment, move it away as quickly as possible, and the bank may end up a bit later with the ad network trying to reclaim the money.

Another risk is people using ad networks to distribute malware, which may include keyloggers, phishing pages, and other things that have an effect on access to online banking, payment pages, etc.

Not the answer you're looking for? Browse other questions tagged banks fraud or ask your own question.

4
How can I prevent my E-mail address from being used as the sender for fraudulent/scam messages?
3
Can multiple transactions of the same amount in a short time be considered fraud/corruption?
1
How can a debit card provide different answers when the same challenge is sent to it multiple times?
0
How can the german ChipTAN / CardTAN system be secure?
0
How can one make a landline number a supercharge number?