How to detect when one or more devices in my local network have become DDOS attack nodes?

I have a home network, big family, with around 20 devices on it at any given time. It seems like every year or so, some device gets a virus or a security flaw is revealed, and the device starts behaving badly.

Normally the device will behave badly and try to password crack my network folders etc.

But the latest thing we have experienced this year is that the affected device will start firing off 1000's of requests to some site. Afterwards, I get on a DDOS ban list. For example, I can at this time not access

This sucks because my ISP does not allow me to change my IP address so I'm stuck banned.

I have my router's QoS feature turned on and I do not see any suspicious network behavior at this time. But that could change at any given moment.

So now the question:

What methods are there to identify this situation so that I can take immediate action?

Namely, I need a way to get an alert when my home network has suddenly become a DDOS attack node. Ideally something could be attached to the router to send me a notification - "hey device IP 192.168.1.x just started making 1000's of requests to sites so I have blocked its access until you take action."

So far this is what I have done:

I'm using a netgear R9000 router. Do you think there are any REST/SOAP api web services that I can use to create a simple program that watches for DDoS attack patterns?

Set up a Pihole to block ads, malicious sites and to log DNS requests. When the numbers spike you'll know where to block and who is causing the issue.

As explained in the pi-hole documentation (and video documentation) you configure your router to use the pi-hole machine as a DNS server. See this video circa 0:57 seconds: youtube.com/watch?v=vKWjx1AQYgs

Any Linux box will do, not necessarily a Raspberry Pi. I added block lists for Microsoft Telemetry and Spybot immunization list. 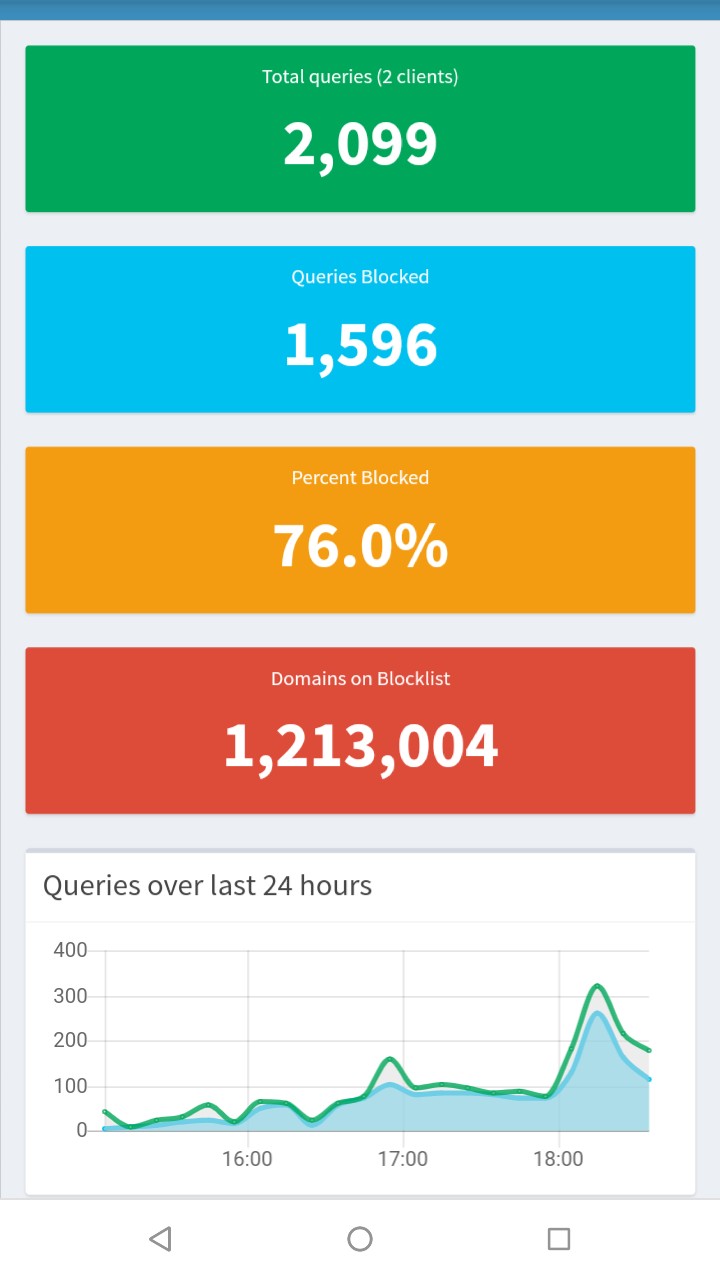 Sorry for disappointing you (because your intention to be a responsible Internet citizen is very commendable), but there's no easy way to do what you want to do.

The simplest of the suggestions though would be to write an e-mail to a DDoS mitigation service provider which is denying you access and to kindly ask for support and clarification. A DDoS mitigation provider probably knows what kind of malware you should expect to see in your network out of its network fingerprint that is left.

Looks like the provider in question is Akamai Tecnhologies in your case, because three of four domain names you've provided point to Akamai IP addresses. USPS probably either has some dedicated equipment bought and deployed or is serviced by AT&T, in either case, Akamai would be easier to reach.

Other methods are a lot more complicated. However, one thing you've apparently forgotten to do is to check your externally facing gateway router (or just to reflash it and update it to a latest firmware version). SOHO routers are a common target for malware.

Also, it might not as well be your fault. Some DDoS mitigation services implement a technique that could best be described as "network redlining", i.e. preventing access from whole networks which seem suspicious, blocking entire ISPs or countries (e.g. China, if we speak of a U.S.-based network service), and so on. To make sure you aren't affected by this, ask your friends and neighbours, try to figure out if other customers of your ISP experience the same set of issues.

There are multiple ways to solve this. Network based detection / interception may be a good start. E.g. installing a firewall that will throttle and or block suspicious traffic.

Not the answer you're looking for? Browse other questions tagged network ddos protection intranet or ask your own question.

23
How do I know if my computer is being used for a botnet-based DDoS attack?
32
How can my IP camera be hacked behind a NAT?
1
How to prevent outgoing UDP attacks?

6
What is the Akamai Name Server I see for some big companies?
36
How to design a home network for IoT devices?
0
Securing traffic between devices on same local network
2
DNS flood vs DNS Amplification attack: How is one considered a network/transport layer attack and the other a application layer attack?
0
How a computer can infect others devices on the same network?
1
How do I differentiate a DDoS attack from a DoS attack?