I have created a customer loyalty and reward app that works in a very simple manner. We supply cafes etc. with a printed QR code which the customers scan on each visit, using the app. Upon completing X visits, the customer is entitled a reward, e.g. a free coffee. In order to prevent illegitimate check ins, such as taking a photo of the printed QR code and scanning it at home, we supply an iBeacon along with the label. Therefore, whenever a user scans with the app the QR code, the app attempts to communicate via BLE with the relevant iBeacon. If it's found, the check in is considered legitimate.

This however has proven to have many shortcomings, the most important of which are:

Given that the incentive to "hack" this app ain't that big (you are not going to win a car or a house by the beach), one would suggest to rely only on the user's location for example to validate that the customer is indeed at the store. However, we want this to also work on delivered goods. Currently we also supply "mobile" labels that a delivery boy has with him and the customer may scan at home or work.

I am trying to think of a simpler or more cost efficient way to validate customer check ins but haven't managed to do so.

Can anyone suggest an alternative "good enough for most cases" way to do this?

My main problem is that someone can take a picture of a QR code and scan it at home. Therefore, I was wondering how hard would it be to check the image my app "sees" during scanning at the server side. So if I uploaded an image taken by the camera, every time someone scans a label and have some "automagic" way to determine if it's a legit scan or e.g. the screen of another phone or a printed copy of my label? 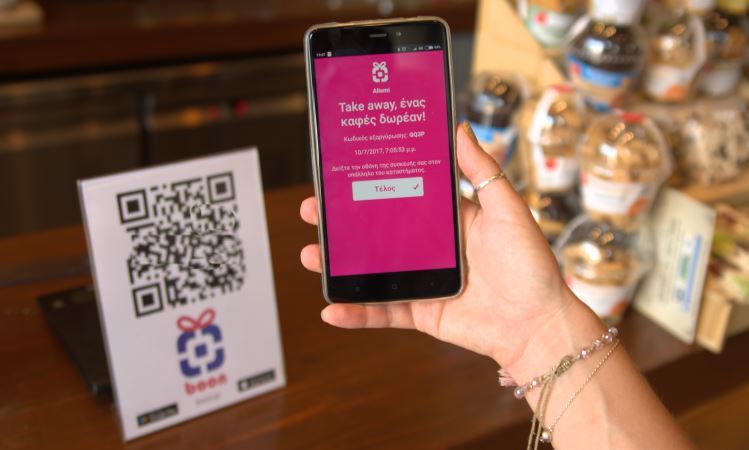 Could I print something on the paper or the plastic label that I can identify during scanning that would be hard to imitate? E.g. making the label look green when viewed on a specific angle?

In the far end of the spectrum, you have your initial solution: printed QRcode that needs to be scanned. It has the lowest cost (1 piece of paper per deployment location), highest usability (a simple scan with an app) and lowest security (can be gamed by anyone with next to no equipment and knowledge).

You traded some cost and usability for a bit more security by adding an iBeacon. That was a good move but it turns out you can't seem to be able to afford neither the additional cost (the beacon) nor the lost usability (the necessity to change the battery).

So, what you should be looking for is for a solution that will be less expensive and more usable without compromizing security too much.

So, I would suggest something that is:

So, my idea is to extend your QR code to include two additional elements:

I would then create several different rules:

Such a scheme will allow you to tailor the validation you make to the situation you face and adjust the usability/security ratio accordingly.

Of course, that's not the only possible option: you can (as suggested by @TripeHound) generate fast changing codes and display them on a local terminal (for instance on a TV screen, maybe as a superimposition over the regular program) but that's a completely different cost calculation.

Initial answer: Obviously, your issue is cost: any solution to your problem is going to require some form of active device at the location that is hard to fake yet not too expensive to deploy.

I would suggest the following:

It's far from perfect and there are several ways to cheat (for instance, take a picture of a delivery man's code)

Not the answer you're looking for? Browse other questions tagged geolocation qr-code or ask your own question.

14
QR codes that can't be copied - possible?
11
Check photos for geotagging and remove lat/long data
1
QR-code based credential retrieval?
2
Is this a safe way to identify someone through a QR code for a purchase?
1
Suspicious login alerts vs customer privacy