I would like to share documents within groups and make sure that the member of each group can only access the documents shared in his/her group. 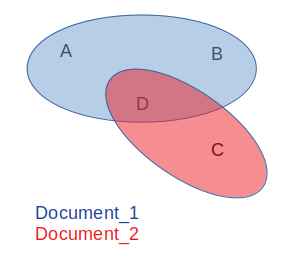 This approach was simplified. In reality we would also make sure that each of the users indeed received the correct synchronous key (consider that A could be compromised and try to exclude B from the blue group)

Problem: D has the S1 and S2. D can communicate both in the red and the blue group. How can we make sure that D is not giving S1 to C?

Any time you give D access to a document you're trusting D not to copy/share that document. Giving D access to S1 requires that same trust.

Not the answer you're looking for? Browse other questions tagged encryption openpgp rbac or ask your own question.

66
Pattern to allow multiple persons to decrypt a document, without sharing the encryption key?

5
(custom software) Security rules on each record when using user-groups per application
1
RSS Feeds: restrict access
4
How to maintain security and trust with a PGP keypair for a team or group of people?
32
Which protocols exist for end-to-end encrypted group chat?
2
PGP multi-key encryption for large, dynamic groups viewing static documents
1
Encryption for multiple recipients without private key?
3
How to prevent participants from cheating when establishing an OpenPGP-like structure
3
Handling User Permissions Between Front-end and Back-end
2
Group Instant Messaging: How to securely store messages on the backend while supporting cross-device message history in a group chat?