What would be the key size for a picture used as a key?

I'm working on a cryptosystem that uses colour pictures as keys for encryption. I'm trying to guess what is the key size of my cryptosystem in order to find the feasibility of a brute force attack. My cryptosystem uses RGB pictures of any size M x N.

The picture is also generated by a chaotic attractor which is sensitive to initial values, so each picture generated is different. These pictures are an example:

I haven't found a paper that tries to do the same calculation yet. Any idea on what the key size is?

Your most recent edit indicates that your pictures are procedurally-generated, so your key size will therefore be bounded by the amount of state required to generate an image. Yours seem to be parameterized by four floats for the initial conditions (and fixed output image size, camera location, point light location, convergence conditions, etc).

Those 128-bits of state will then be transformed into an image by an algorithm that depends solely on your provided state, so your image "key" cannot contain more than 128 bits of information. In fact, I think that entire classes of initial values produce identical outputs (e.g. when all four floats are extremely small), so your image "key" size will be strictly less than 128-bits.

There's really no benefit to touching the 128 bits of state by turning it into an image (and then somehow back) if you only reduce the size of the key by doing so.

A picture is far too large to use as an encryption key directly, you'll want to run it through a KDF first.

It also depends entirely on the picture whether it will have enough entropy to be useful. You could have a 1000x1000 image that's solid white, but it would be useless as a key as it contains no entropy. Pictures from cameras tend to have a fair amount of entropy in the lower bits, so that could be ok, but your users would need to understand that not just any picture is a good key.

Pictures as keys is in general not a great idea. Pictures are usually taken to be shared, and keys are something you don't want to show to everyone. Using a picture as a key also sounds to me like it could be relying on security through obscurity (i.e. you just use an image from the thousands you have on your computer, but that's effectively very low entropy, probably under 20 bits unless you have an insane number of pictures).

Feel free to continue developing this for the sake of learning, but until you have a much better grasp of cryptography it's better to leave this sort of thing to the experts (see Why shouldn't we roll our own?).

Any cryptosystem should have keys with keysizes at the 128, 192, and 256 bit-of-entropy security levels.

So the question comes back to you: where are these images coming from and how much entropy do they contain? If they are completely random bit streams that are being interpreted as an image, then (ignoring entropy loss from lossy compression codecs), you get log_base2(256x256x256) = 24 bits of entropy per pixel, so you'd need 6 / 8 / 11 pixels respectively for the 128 / 192 / 256 bit security strengths.

If you're not generating completely random images and instead allowing people to use, like, photos, then I have no idea how you'd even begin estimating the amount of entropy in one of those.

Bottom line: using images as key material seems like a really odd thing to do and conflicts with the common practice that key material be completely random data from a cryptographic-strength RNG.

Also, from the information in your question, I'm not convinced that brute-force is the attack you need to worry about; I'd be more concerned with the "get access to their laptop and try every image on their hard drive" attack.

I can tell from the images that your key size is significantly less than the size of the images (because otherwise most of them would look like random coloured static).

Your key size is less than or equal to the base 2 logarithm of the total number of different images your chaotic attractor program can generate.*

That's another way of saying your key size is less than or equal to (probably less than) the amount of bits it takes to specify all of the inputs to your chaotic attractor program.

If you hash the image and use the hash as a crypto key, your key size is equal to or less than the size of the hash.

*That's your exact key size if your encryption algorithm is something like "XOR each bit of the image with the corresponding bit of the plaintext" (don't use that algorithm for important secrets, BTW, because parts of the message covered by the grey areas in your images could be super easy to decrypt).

According to @Blender's answer, you're just using 128 bits to generate the picture. I'm guessing that you want the picture itself to count as a key larger than the 128 bits that you put into the algorithm that generated it. And it might.

Specifically, what you're trying to do is create a key-stretching algorithm that attempts to stretch 128 bits of input into a much larger key. This isn't necessarily fruitless, but there're things to be aware of: 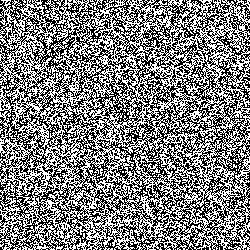 .
This bitmap is (supposed to be) random in that an attacker looking at any combination of its pixels shouldn't have better-than-even odds of guessing what another pixel might be.

Unfortunately this site doesn't have MathJax enabled, so it's hard to answer your question directly without it looking weird. Here I'll write a response as-though MathJax were available.

In the case of a black-and-white image:

So, if you can manage to get past the inital problems involved in too small of keysize and too much loss, and use KDF after, there's a benefit to using these keys for auth after all.

The generation of that stuff must take forever in relation to a traditional hash, so if the initial parameters are treated like a password, password attack times will be slow.

But there's easier ways to get that. bcrypt() and friends scale up well.

Not the answer you're looking for? Browse other questions tagged encryption cryptography brute-force or ask your own question.

2
Is there an equation to calculate the number of instances of a series of characters exist in a given key space?
5
How to securely hash/tokenize a string
2
Cryptography: Encrypting with password without storing it
0
Review on encrypted data storage algorithm
2
Slow Hashing Without a Salt?
0
Strength of key pair
1
How often do brute force attacks find the password or key in a much shorter amount of time than the theoretical max?
5
Can name and date of birth be hashed somehow to generate a secure identifier?