Samsung EVO 970 SSD on laptop without TPM - secure erase, is the drive encrypted?

I have since installed a Samsung 970 EVO SSD which as I understand is a self-encrypting drive (SED) and, what I am not sure about is, it can be encrypted without a TPM?

Samsung Magician now shows the below ("Encrypted Drive" is "Enabled"): 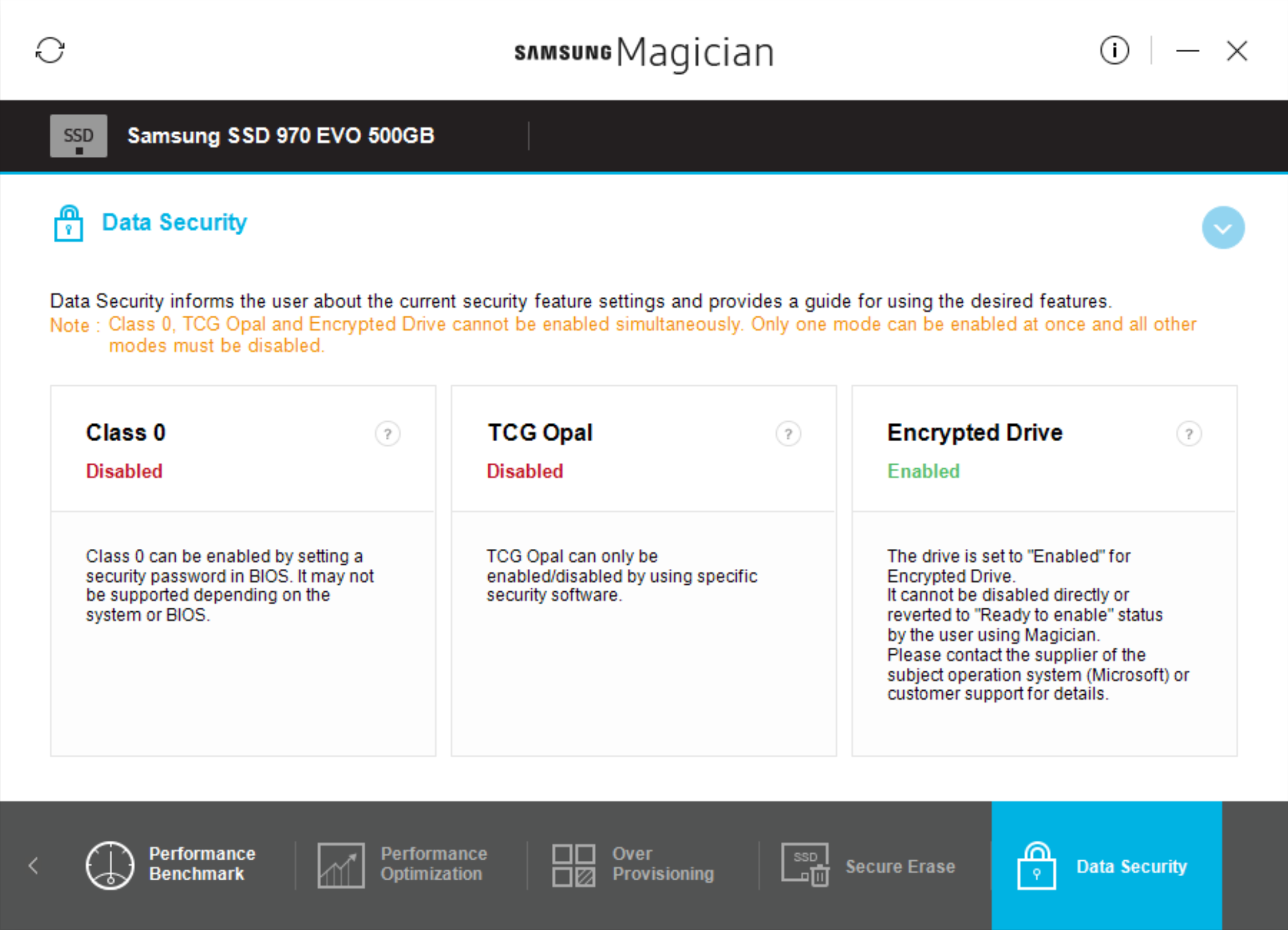 Bit Locker will not enable on the OS drive without overriding the "your administrator must set the allow bitlocker without a compatible tpm" setting.

Does this mean my drive is encrypted?

Or do I need to override the TPM setting and setup bit locker still and then bit locker with use the hardware encryption on the drive?

Or do I need to set a BIOS system password?

I have searched but with no clear guidance or insight.

There's a lot of information here so I'll try to answer directly and clear up anything that's incorrect. First and foremost, BitLocker drive encryption and the built-in encryption on the SED are two mutually exclusive forms of encryption and I would not recommend running both due the likely significant performance impact.

If you are using the built-in drive encryption (and it appears you are), then there's no need to use BitLocker. The SED stores the key on the drive controller (hardware outside of the OS) so it's faster and technically more secure without a TPM (although there are publicly known attacks against SEDs from Samsung and Seagate (and BitLocker for that matter)).

As far as your questions go:

Well, yes. But what you're confusing is BitLocker with the built-in drive encryption on the SSD. As previously stated, they are two distinct forms of drive encryption. You are receiving the message, "your administrator must set the allow bitlocker without a compatible tpm" because you don't have a TPM and by default, BitLocker wants to store the key in the TPM for the additional security measure. If you change this setting, you can still use BitLocker but the key is stored on the drive and can be stolen/reclaimed by someone with the right tools and know-how. I'd also like to reiterate, dont' use both the SED encryption and BitLocker. It's redudnant and will likely destroy your IO experience.

If you're concerned about people having physical access to your machine, it's best practice to set a BIOS password. However, know that there are many nullifying circumstances with this:

Edit: As stated in the comments, if you enable BitLocker, it can and will prefer to use the hardware encryption enabled by the SED due to performance reasons. However, as it's not yet enabled and your Samsung software is saying the drive is encrypted, it's probably using the built-in method on the SED.

Does this mean my drive is encrypted?

Yes. You have successfully set up BitLocker using the built-in hardware encryption of your drive. The "?"-tooltip of Samsung Magician will clearly state that this is not a separate drive encryption but meant for use with BitLocker. In fact, using this option, BitLocker will simply rely on the drives always-active internal encryption, which is very efficient. You can double-check by invoking "manage-bde -status" from an elevated command prompt or PowerShell.

Or do I need to override the TPM setting and setup bit locker still and then bit locker with use the hardware encryption on the drive?

Or do I need to set a BIOS system password?

you need to enable bit locker without tpm. use gpedit.msc. i don't remember the config but you can google it.

Not the answer you're looking for? Browse other questions tagged bitlocker ssd or ask your own question.

0
Samsung SSD 840/850 EVO with DiskCryptor?
0
When is garbage collection activated on my Samsung T3 external usb SSD drive?
3
Enabling SED for SSD and data remanence
10
How to erase as much as possible an SSD without ATA Secure Erase?
4
Anniversary Update with Bitlocker Reboot without Encryption Key
1
Safe erase of a Toshiba SSD with Absolute Secure Disk software
2
Secure erase partition only on SSD, not the whole thing
2
BitLocker Encrypted Hard drive without UEFI/BIOS Password set?
1
How to securely erase the free space on an SSD in windows 10?