I am attempting to use SRP to verify clients when they authenticate with a webserver, so that the password is never sent over the wire.

Looking at the SRP procedure, when a client registers with the server it sends v (verifier), s (salt), and I (the username or identifier) to the server who stores these values. However, it is stated that:

If the salt can be chosen by either the server or the client, then we can just assume the server generates it.

My question is, why is s static? Why does it need to be stored at all?

The salt is sent out to whoever requests it, and because of this an attacker could attempt to build a targeted rainbow table by requesting the salt of a specific user. This is brought up in this question, at bullet point #2.

Wouldn't it provide more security for the server to randomly generate a salt upon a ClientHello message? On each separate request, a different salt would be sent, preventing the attacker from being able to compile a targeted rainbow table. Additionally, the salt wouldn't be stored on the server, which would make the information even less useful in the event of a data breach.

Notably, this method might open up an attack vector where the attacker continually initiates the authentication procedure until the server responds with a favorable salt. However, if the entropy of the salt s is sufficiently large this would be infeasible. Additionally, the server could throttle the number of authentication attempts per username I, so that an attacker couldn't run this attack in parallel with a botnet

You are absolutely correct that making the salt publicly available brings with it some security risks (which I will return to), but first let me address why the salt does need to be static.

As you (and others) have noted, the fact that the salt is fully public means that an attacker does not need to wait for a breach of the server to start cracking. The attacker can precompute a large number of candidate v and then in the event of a server breach, when the real v is discovered, the attacker can see if that is a v that they have a password guess for.

This issue is true of every prior (asymmetric) PAKE as was pointed on in a brilliant paper released earlier this year: OPAQUE: An Asymmetric PAKE Protocol Secure Against Pre-Computation Attacks. The authors propose a new construction that wraps a more traditional PAKE in a way that does not suffer from this problem.

Although I'm the primary contributor to an SRP implementation, I posted the following picture after learning about OPAQUE. 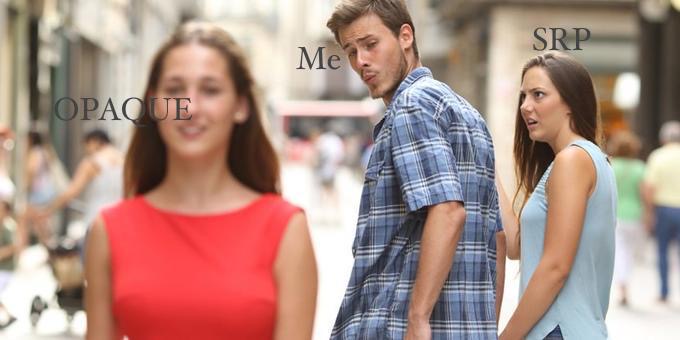 Not the answer you're looking for? Browse other questions tagged authentication web-application password-management salt srp or ask your own question.

13
Can I use the same password both for SRP and for client-side encryption?

7
Using Secure Remote Password without sending the username in the clear
11
HMAC Based Request Signing - Storing the Salt
0
Is this a secure method for authenticating clients?
13
Can I use the same password both for SRP and for client-side encryption?
1
There is a recommanded solution to protect SRP verifier to be used if the DB is leaked?
2
Web Service Authentication Using PBKDF2 and a Public Salt - Does the salt need to change on every request?
1
Is storing the bcrypt salt in isolated database a good idea?
7
Storing Username and salt in separate table
8
Alternatives for sending plaintext password while login