Global Blackout is a myth?

In order to shut the Internet down, anonymous claimed that putting-down the 13 root DNS servers of the Internet and therefore disabling the HTTP Internet, the most widely used function of the Web, would do the job. Those servers are as follow:

Is there 13 root D.N.S servers, or it's all just a lie, and if this assumption is true, can anyone really bring these servers down ?
personally I think the reality is they are comprised of networks of multiple servers that handle the millions of DNS queries the root servers receive every hour, so its impossible to do such a thing, as shutting down the internet as we know it.

There are 13 top-level server designations, but there are significantly more than 13 servers, since most of them are multi-homed. Taking down all of them at the same time would be extraordinarily difficult.

Furthermore, the only information you need to get from the root servers is the location of the TLD servers, of which there's only a few hundred. Any resolving DNS server will already have this information cached, so you have to keep all of these server down for the entire period during which the root data is cached, which is typically 2 days.

During this time, people would notice and take countermeasures to prevent caches from expiring.

Altogether it's a tall order at best, and in all reality just a tough-talking pipe dream.

It is a myth. It used to be 13 servers yeah, and quite some years ago a hacker group almost succeeded in taking down all 13 of them. In the end, a few of the root DNS servers survived and the Internet was saved. Since then, the addresses have been changed from unicast to anycast and instead of 13 servers there are now 100s. Read more at https://en.wikipedia.org/wiki/Root_name_server and https://en.wikipedia.org/wiki/Distributed_denial_of_service_attacks_on_root_nameservers

Each distributed network that represents a root name server is addressable by a single IP address, i.e. one of the root IPs you named. This is possible through a technology called anycast, which causes traffic sent to a root name server IP to be routed to any available participating server. 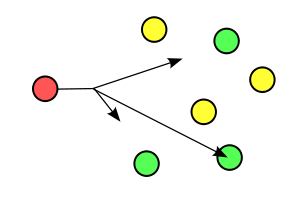 Only three root name servers (B, D and H) do not use anycast.

The reason anycast is useful in DDoS scenarios is that it allows a single system to distribute traffic across multiple machines, connected via high-speed networks. This essentially acts as a way to split the DDoS into smaller chunks, where they can be dealt with more easily.

All in all, the likelihood of anyone performing an effective attack against such a highly distributed and carefully monitored system is minimal. When combined with traditional DDoS mitigation techniques such as black-holing, anycast effectively negates flooding attacks. Since the systems are so highly distributed, physical attacks against server sites would be infeasible too.

Committing a global blackout is possible only with a well coordinated terrorist plan. If they know the location of every major data-centers in the world including all the root server's location and bomb it, it will spread chaos and business catastrophe. Even the most well planned risk management and BCP methodologies wouldn't make business to continue that same day. After all, the life of each one would always matter than any business that's at stake.

This is the very reason why information and national security is important, to protect life and business from these threats.

Not the answer you're looking for? Browse other questions tagged dns ddos denial-of-service server or ask your own question.

1
What are the risks of removing ISATAP from the default global block list?
3
Why isn't there a Global Root for SSL?
8
How to obtain privacy and authenticity with DNS?
12
Is a global DNS record a security risk for phpMyAdmin?