I tried to find the GET data of some malware but it appears that this malware is encrypting traffic using SSL.

When I tried to decrypt the SSL data via Fiddler, I always get nothing — only information about the SSL configuration as you can see in the picture. 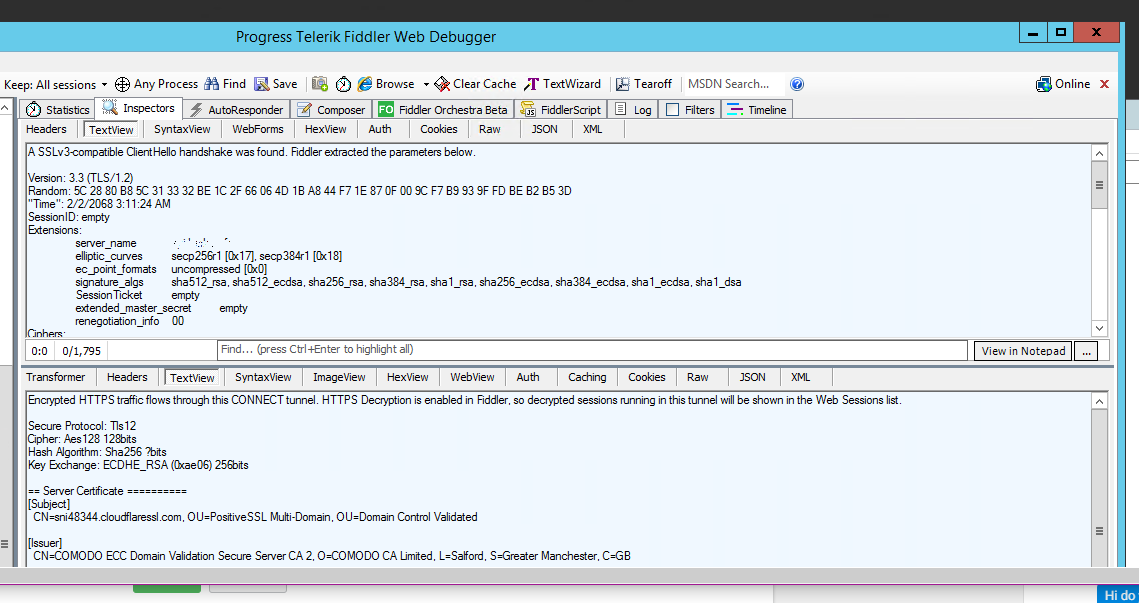 Is there a way to read the data?

If you can see the TLS handshake but nothing more (that is, the CONNECT request is not followed by any other requests), the client (the malware in this case) is probably pinning the server certificate (or at least public key), and rejecting the certificate that Fiddler offers it because that's not the expected one. If this is the case, you still have a few options (however, they all require some degree of reverse engineering). In no particular order:

Another possibility is that the server is expecting a client certificate from the malware before it will complete the handshake, but in that case I would expect Fiddler to prompt you for it. If it turns out that the problem is a client cert after all, you will need to find that cert and feed it to Fiddler.

Malware analysis can be hard. A really well-written piece of malware is going to be a tough nut to crack. On the other hand, really serious malware is extremely unlikely to be written in .NET - decompilation is too easy, and you can pull far more obfuscatory tricks with native code - so it's probably not all that heavy on anti-analysis mitigations.

Not the answer you're looking for? Browse other questions tagged tls .net fiddler or ask your own question.

6
Can Fiddler decrypt HTTPS traffic when using elliptic curves + client cert authetication?
3
Intercepting HTTPS Android app traffic
0
Decrypting SSL traffic for Security Onion at or before the interface
6
Decrypting SSL using Wireshark on Linux vs Windows
4
How come I can see a full HTTPS requests via Fiddler?
0
Sniffing an outbound HTTPS packet - only intercepted by certain software, can't decrypt
2
Is it possible to extract a certificate that an application uses to connect to an API server?