I found the comparison function below (slightly modified) from a crypto library I was using. I was curious about the potential vulnerability to side channel attacks. Specifically, the character comparison is only done if the character being compared is within the bounds of the two strings. I suspected this might allow an attacker to determine string length.

Perhaps this difference is simply too small to be subject to a timing attack, but I played with an attempt below. I basically create strings of increasing lengths and compare to a given initial string. I was expecting to perhaps see linear growth in comparison time both before and after the point where the second string becomes longer, but perhaps with a different slope since the operations performed are different.

Instead, I see the data below (note the string being compared is 27 characters in length). Any explanation as to why I have no clue what I'm talking about would be greatly appreciated :)

A small note, I did try with -O0 in case some strange optimization was at fault. The only thing I can think to do from here is start digging into the generated assembly. 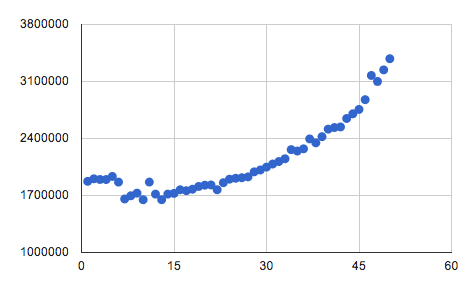 First, some comments on the code:

A better way to compensate for such attacks:

Anyway, here's where the fun part starts. Consider the following assembly code that could be used to compute whether two strings are equal, with early-out optimisation removed as a basic timing attack defense:

There are actually a few timing attacks here. The first two instructions are O(1). However, the two single-byte reads that follow are not.

Whilst memory reads are usually O(1), in practice they will not be. In fact, they don't fit into the big-O model at all. On a 32-bit system, every 4th byte read will be faster than the others. On a 64-bit system, every 4th byte will be faster, and every 8th byte will be faster still. This is due to non-aligned memory reads. The CPU is great at fetching blocks of data that are aligned to its bus size, but not so great at fetching random individual bytes. The CPU will attempt to optimise this by pipelining instructions and loading the block into its L2 cache, which makes this issue more subtle, but it's still there.

The next trick is for strings that are larger than the CPU's cache. If you have a string that exceeds this size (usually 128KB or higher for the L2 cache) you'll see slight delays in memory fetches every time a read exceeds that boundary. This is usually only a small delay, since the L3 cache will be used to store the next block, but we can see an even bigger difference for larger strings (8MB+) as the memory fetches have to be done from system memory.

If we consider a block memory copy as O(n), where n is the memory length, this makes some sense, but does not properly depict the small variances in timing caused by implementation idiosyncrasies.

Finally, we can see that the mov dword ptr ds:[0040AAAA], 0 instruction is executed whenever one string does not match another. This leaks information in two ways:

As we can see, it's quite difficult to prevent these issues. Here's my attempt at a better system, assuming fixed-length strings padded to alignment with null bytes:

This is almost perfectly O(n) for the following reasons:

First, there is a bug in your comparison function; the "eq = 1;" in the loop should read "eq = 0;". It should not change the timing, though, assuming that the compiler does not play games with the optimizer. To make your code more resistant to optimization games, you should put the benchmarked function (your CompareStrings()) and the benchmark code (test_with_length()) in distinct modules (separately compiled C source files, and pray for the compiler not to perform inter-module optimizations -- gcc should be safe for that).

What you see looks correct. The two strlen() calls should have a cost which rises roughly linearly with the sum of the lengths of the two strings; but strlen() plays some nifty games in order to be faster. In particular, strlen() will try to read data bytes by whole aligned chunks (4, 8, 16 bytes maybe), and this will work because the compiler knows that memory access control by the MMU works on a page granularity, so it is possible to make "safe" out-of-bounds accesses in many cases. The small strings will have specialized versions, and the lengths here (at most 100 bytes) are too small to really exhibit asymptotic behaviours.

Chances are that the cost of the two strlen() is small with regards to the for loop. It will introduce some "noise" in the graph, though, so you should not look too closely at the dots.

The for loop will run for max_len steps, which is the length of the longer of the two strings. Therefore, as a first approximation, we expect the cost of that loop to be linear in the length of the larger of the two strings, so you should see a roughly constant time when the second operand length grows from 1 to 27, then an increase -- which is what you see in the graph.

Not the answer you're looking for? Browse other questions tagged timing-attack or ask your own question.

20
Timing Safe String Comparison - Avoiding Length Leak
2
Timing-safe string comparison in high-level languages
1
Timing side-channel attack example
2
Are there techniques or methods to develop security protocols without side channel attacks?
3
Change the function such that there are no more side-channels
15
How can I prevent side-channel attacks against authentication?