How does the server-client scheme work in a botnet?

I am having trouble wrapping my head around the idea on how a server-client botnet structure actually works.

Let's say that the server is A, and the client is B.

My question is how does B (the attacker) even know when A (the infected) is online, if B (the attacker) does not have a server running listening for connections incoming from infected machines?

For example if the attacker is spreading his install file for his botnet, how would they even know when computers are infected with their server indeed running if he does not have something listening for established connections?

The Client-Server model in botnets is just the same (with maybe some pimps from botnet family to other) as any client<->server model, its setup like a network with one or more main server(s) that control the transmission of informations from and between each client. As for RATs the botmaster have usually a Command and Control (C&C) server (or servers) in order to orchestrate slaves (clients). This model is called Centralized. While there is also Peer-To-Peer model and Hybrid models

While far from being exhaustif, here are some ways described in the following slides:

There are several maneer to perform this, and keep in mind that usually (if not always) that it's A that notifies B of its presence,whether as a new infection or as an online/offline activity. There is always some kind of Push and Pull methods.

For example once a client of Zeus botnet is infected, he tries to download a config file from the server (B) via HTTP/Getnotifying this way the server of a new infection (called registering): 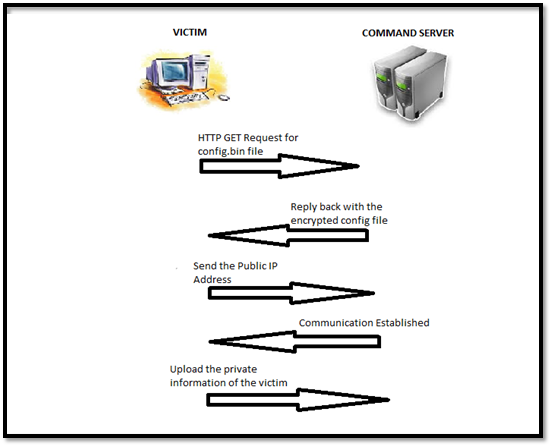 Some Botnets uses IRC , by setting up some IRC servers, A reports to B and B commands A via IRC commands.

There is no generic answer, it all depends on the topology/model and how the developers of the botnet in question are smart/skilled.

Not the answer you're looking for? Browse other questions tagged botnet or ask your own question.

5
How do you search for a botnet out in the wild?
0
How does the Mega-D BotNet send spam?
2
How do bots communicate in the zeus botnet?
8
How do CC servers communicate to botnet bots in a local network?
4
Creating botnet C&C server. What architecture should I use? IRC? HTTP?
5
How is the Mirai botnet directed?
3
How does a botnet update?
1
How do botnets self-propogate exactly?
1
Why attacker do not care about masking the IP of the infected device of botnet?