One of the selling points of Enterprise Resource Planning systems like SAP or Oracle E-Business Suite is their claim to give management visibility across the business, by aggregating (or at least integrating) data on different facets of business operations. Taking these claims at face value, how are ERP systems set up when a company such as a defence contractor carries out classified business?

The problem I'm imagining is that classified information could be infered from otherwise "boring" business data. For example:

I've never had to solve this problem myself, but I can think of a few ways an ERP system could support a company's conflicting obligations to safeguard classified information and to maintain detailed records for audit and management control:

In general, how do ERP system implementations handle this situation?

Generally speaking, there is no inbuilt functionality that will facilitate this. The level of isolation required simply can't be patched into an ERP product after it is developed. SAP, particularly, is somewhat of an eldritch horror in this department.

The only effective solution I've seen used is to run a separate instance on separate infrastructure for cleared work. Anything of normal sensitivity (f.e. up to commercial in confidence) goes on the regular instance, anything secret or above goes on the cleared instance.

Of course it is often useful or necessary to have metadata about the cleared instance available on the normal instance. This can generally be facilitated by implementing a plugin on each instance for the purposes of intercommunication of that metadata, with an intermediary system that helps enforce the data contract for security purposes.

Information sharing can still be performed carefully, by installing plugins on each instance that allow for the export/import of data, and having the instance infrastructure able to communicate over only a fixed channel (e.g. HTTPS on a specific port, enforced by firewall appliance). Here's a diagram of an approach I've seen used before: 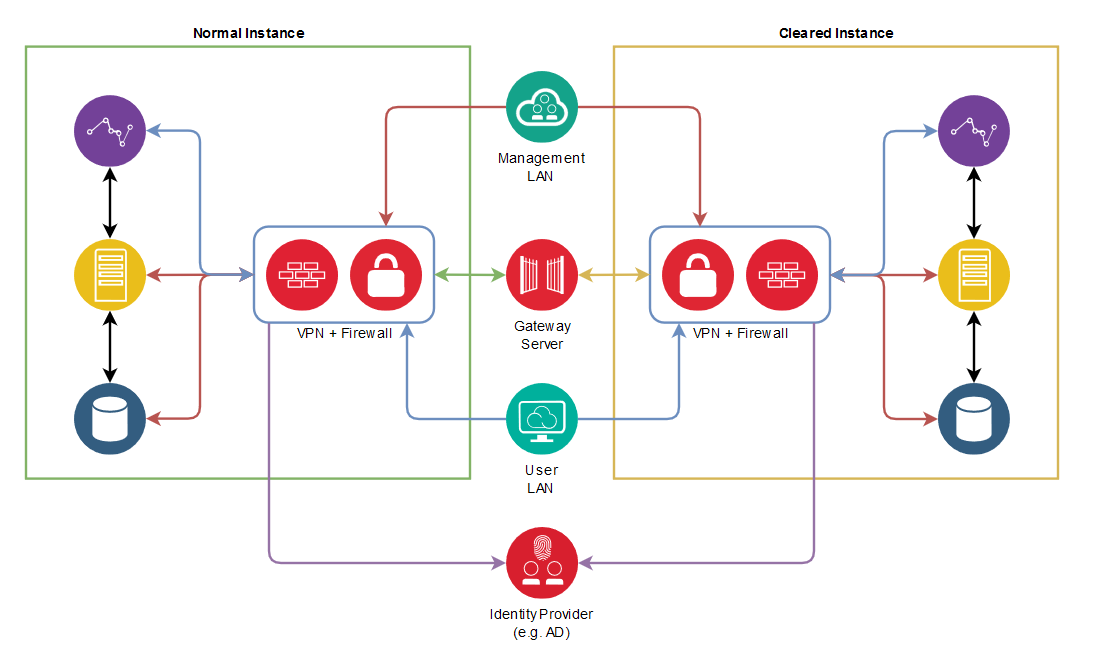 A gateway server runs a web service on a pair of ports - one for cleared-side connections, and the other for normal-side connections. It VPNs into both networks and the VPN endpoint applies firewall rules specific to that connection, allowing only inbound connections to the gateway on the correct port. The web service consists mostly of a service endpoint that validates incoming data, and a message queue that the data is placed into. Each ERP server plugin instance can connect to the gateway to send and receive messages. By combining host-based firewall rules on the gateway itself and appliance firewall rules on each side of the network, it becomes exceedingly difficult for an attacker to directly penetrate from one instance to the other.

The VPN also allows for management connections from a whitelisted IP address range, using separate VPN credentials. For these connections a relaxed firewall rule set can be applied, but it is worth blocking new outbound connections from the instance network to the management LAN because such connections should not occur in general (and change requests can be raised if such a connection needs to happen for some reason).

The users can VPN into each instance. The blue arrow colour indicates the allowed access, i.e. the users can only access the ERP analytics front-end rather than any management features or database instances. For convenience a routing device can be placed on the user LAN which has a permanent VPN connection into the normal instance, to avoid needing VPN clients on every standard user's machine. Users who require access to the cleared instance can then VPN in separately.

You can enhance this layout in a number of ways. For example, the gateway server could have an attached log store which both instances send logs to via the web service. This means that even if an attacker compromises an instance, the logs cannot be destroyed.

It depends how big is the business. Medium-Big corporations have DLP protection which protects from internal data leakage. Like if somebody is sending VAT, number or some "secret" the DLP is triggered and admin is contacted. Also advanced DLP nowdays is artificial itelligence, which by it self recognizes important data.

Not the answer you're looking for? Browse other questions tagged data-leakage confidentiality or ask your own question.

1
How to obfuscate a relation between two tables in a database?