What are the risks of exposing the Docker for Windows daemon on localhost?

A developer running Docker for Windows needs to enable the option "Expose daemon on tcp://localhost:2375 without TLS" in Docker setting > General tab. 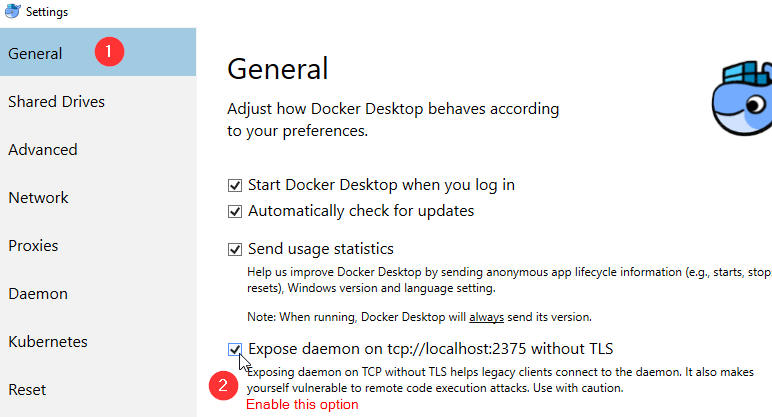 There is a warning:

Exposing daemon on TCP without TLS helps legacy clients connect to the daemon. It also makes yourself vulnerable to remote code execution attacks. Use with caution.

If you expose the Docker daemon without authentication (which is what that options does) then anyone who can make HTTP requests to localhost:2375 will be able to execute Docker commands on your host (the Docker daemon is a REST API so takes HTTP commands)

The consequences of that could be bad depending on the setup in question. For example an attacker could start a container which would connect back to a system controlled by them and allow access to your internal network.

An attacker could also start a container which maps in directories from the underlying host into the container that they control.

How probable these scenarios are, depends on your exact threat model, but that's the kind of thing that could occur.

As to mitigations, you can configure the Docker Daemon to use client certificate authentication via a TLS cert, some more information about setting that up here

Of course that might not work for whatever tooling your developer needs to use.

Not the answer you're looking for? Browse other questions tagged tcp docker risk or ask your own question.