What steps should I take to ensure there are no unpleasant surprises in a recently purchased home?

After buying a house from another party (i.e. not new construction) what steps should I take to ensure the previous residents have not left behind anything unpleasant for me?

I'm not worrying about booby traps or anything of that sort, but rather surveillance equipment or physical security backdoors.

I'm already planning on changing the locks, but what other steps should I take to limit any unpleasantness from the previous owners.

In terms of surveillance, on a consumer level, most of what you're likely to run into are WiFi-based surveillance devices and cheap baby monitors.

There are two tricks to discovering WiFi surveillance devices in your area. One trick you can sometimes do to find WiFi-based cameras is kill the power (at the breaker), wait 10 seconds, then bring it back online and watch for WiFi APs on your phone. Many of them send out a beacon SSID for configuration during startup.

The other trick, for WiFi-based cameras that connect to a configured network, is to use a WiFi card in promiscuous mode to capture probe packets. These packets are effectively the "are you there?" queries from the client device when they are trying to connect to the network. There'll be some noise from nearby devices, but again you can turn off the power, look to see which devices are sending out queries, turn on the power, then look for new devices (particularly ones that reliably send out a probe packet within the first 10-15 seconds of power being turned on, but never when the power is off).

Baby monitors are trickier. They're mostly running on 2.4GHz band, which puts them outside the range of most cheap RTL-SDRs (usually no more than 2.2GHz), but they're not WiFi devices. Instead most of them transmit using FHSS. If you buy a down-converter for your SDR so that you can receive 2.4GHz, or buy a pricier SDR with a wider tuning range, you can look for FHSS signals in the 2.4GHz band. They look like this: 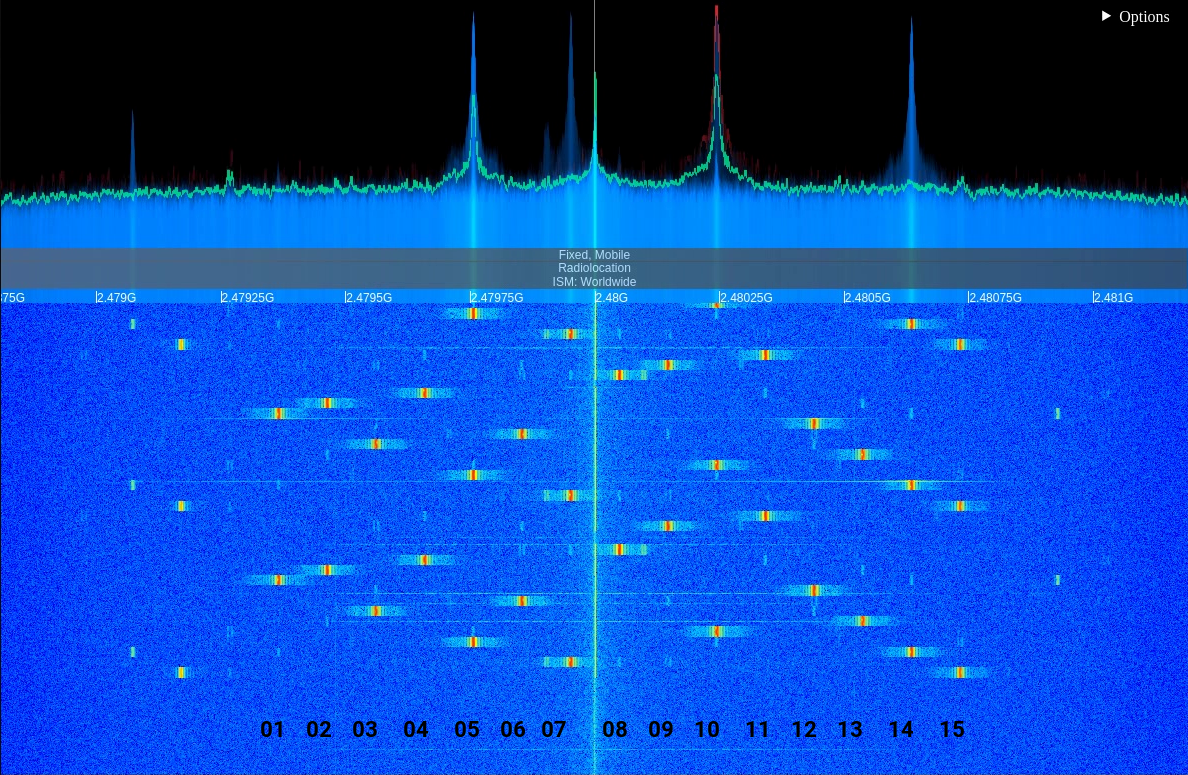 Note the strong carrier, two sidebands, and characteristic spots over the frequency domain. Unfortunately you'll need to do a lot of manual searching, since the 2.4GHz band is quite expansive, and that still won't tell you where the device is. Again you can cut the power to see if the signals go away so that your neighbour's baby monitor doesn't give you false positives.

For audio-only baby monitors you can scan for narrow FM (NFM) on 40MHz and 49.5-50MHz (protip: get a battery radio and turn it on as a background audio source to make the signals more visible on your SDR) and wideband FM (WFM) on ~860MHz. You can also check the DECT bands (1920–1930MHz) for strong signals, again doing a differential test with power on and off, although you'll need some magic to decode these back into audio as they're not analogue.

On the physical side the locks are the main one. Don't forget sheds and garages, as they often contain valuables and are overlooked when changing locks. Ask your locksmith to install a cylinder lock with protection against snapping, bumping, and drilling, as these are the three most common low-skilled attacks. Not many burglars will SPP or rake a lock but you can get a fancy pick-resistant cylinder if you wish.

You should check to see whether the locks on lockable windows are working - it's easy to grind off the lever on them so that they appear to work (key goes in, turns) but it doesn't actually prevent the window from being opened. Also verify that all exterior doors open inwards, as outward-opening ones will have the hinge pin on the outside and that can easily be knocked out to remove the door (outward-opening fire escape doors have special pinned hinges to prevent this attack). Again, you can ask your locksmith to do a once-over of all the locks and security controls in your property.

Finally, you can install deterrents like an alarm system and motion-sensor floodlights. They make it hard to approach the property without being spotted and make it even harder to break into the door unseen. Back doors are more preferable as they're away from the street, so a wall or fence and a locked gate preventing access helps a lot.

Not the answer you're looking for? Browse other questions tagged physical surveillance or ask your own question.

24
Securing the security guy's home office: what should we do?
23
What are the advantages and disadvantages of different types of motion sensors?
10
What risks are there with a Bluetooth based door lock, and are there any mitigations?
6
What steps can be taken to secure snail mail?
1
What security implications are there when sending video feed over unknown applications, and how can we protect ourselves?
2
What security considerations should I keep in mind when setting up home automation using IFTTT?
2
Can the school see what you are doing on their laptop when connected to your home WiFi?
0
Can my job see what I do on my home computer if I use my work computer on my home network?
1
Mobile phone is picking up 13 bluetooth devices and not sure what they are?