I have recovered my credit card PAN (6 chars masked) and expiration date on a merchant site, acceptable or not?

I have a credit card saved in X merchant. I only see the last 4 digits in the UI.

I have launched a 3D secure payment transaction by using my saved card. Then I have noticed that even in the failed transactions browser posts back my stored credit card information (PAN's 6 chars masked + expiry date) to the X merchant's website.

IMHO this is a security risk. I would not do this as a developer. But what about PCI DSS? Is this complies with PCI DSS?

The first six and last four digits are the maximum number of digits that may be displayed.

It looks like PCI DSS allows displaying PAN like this. But I could not find any information about masking expiry date. That's the point I have no answers. 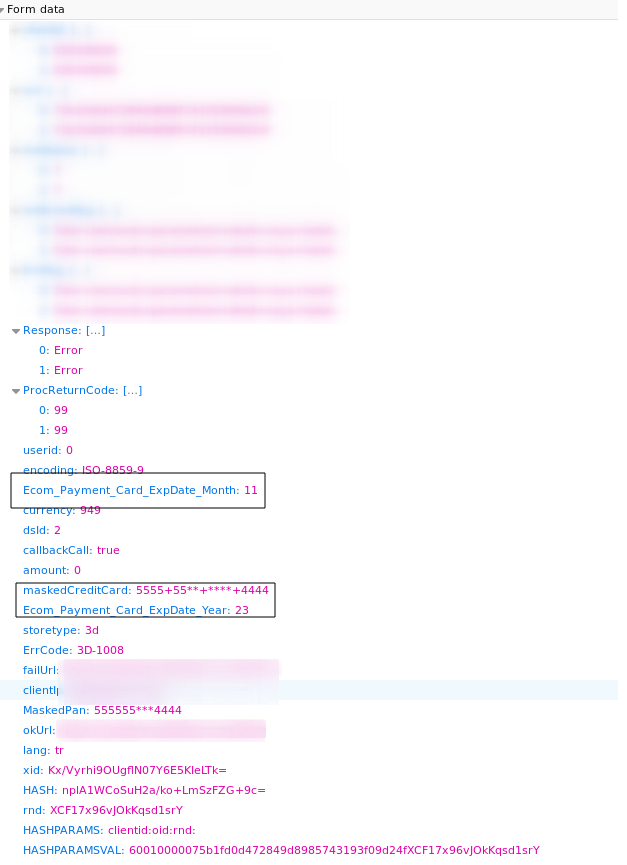 On the other hand, if there aren’t any valid reasons for printing it, don’t! I mean really important valid reasons, not just because marketing or fraud prevention thinks it would be a good idea.

But what about PCI DSS? Is this complies with PCI DSS?

It appears to. What you're seeing is referred to as Truncation as defined in the Guidance for §3.4:

The intent of truncation is to permanently remove a segment of PAN data so that only a portion (generally not to exceed the first six and last four digits) of the PAN is stored.

Transmitting that data appears to be governed by §4.2; I believe Truncation is an acceptable way to render unreadable (emphasis below is mine):

No this is absolutely a violation of PCI. See the following:

I'm a former PCI penetration testing specialist. Best practices for storing credit card data is to not store it at all. But that's usually impossible, so next best answer is to store it securely using a high strength symmetric key encryption algorithm and have the encryption key stored in a FIPS-40 compliant manner or to use some trusted computing environment.

Most importantly the credit card data should never, ever be sent like that to the customer. At most the last 4 digits of the card can be sent for identification purposes, requiring the CVC on the back to use the saved card from their systems if you don't want to type the full card info in again. I'm sure with enough time the 6 digits could be extrapolated. They typically follow a pattern and there are no more than 9^6 combinations which in computing is not much. (531,441) to be exact.

Edit: With regards to the transmission of the card info, it is occuring even upon failed requests. You answered that part of the question yourself, that's not a correct behavior and should not be happening.

Not the answer you're looking for? Browse other questions tagged pci-dss credit-card or ask your own question.

67
Minimum requirements for storing last 4 digits of credit card number?
0
Senario:SSL Enabled Online Banking Application. Question: Should card numbers be provided back to a user un-masked, when there is a failed login?
4
PCI DSS - mask PAN and log individual access to PAN
5
How is truncation according to PCI DSS secure?
5
Creditcard store first six digits PCI reference
0
PCI Compliance and Card Data Transmit
0
Outsourcing PCI data: Is this ok?
0
How to communicate Credit Card details to customers when instantly approved in PCI-DSS compliant way?
0
Is it allowed to store 8-digit BINs outside of CDE