Something very weird and troubling started happening on my wife's Gmail account today. She received an email from G. Arnold, who is a regular correspondent, but in her inbox it showed as being from "Crazy Arnold". That sounds quite funny and off-beat, but it's not in character for this particular person. Plus, when she opened the mail, it briefly flashed up with the sender's real name, then switched back to "Crazy". In the screenshot below, I captured the moment before "G... Arnold" switched to "Crazy Arnold". In addition, the "to" address shows as "that Bnos", instead of "Bnos ...", the organization on whose behalf she is receiving the mails. 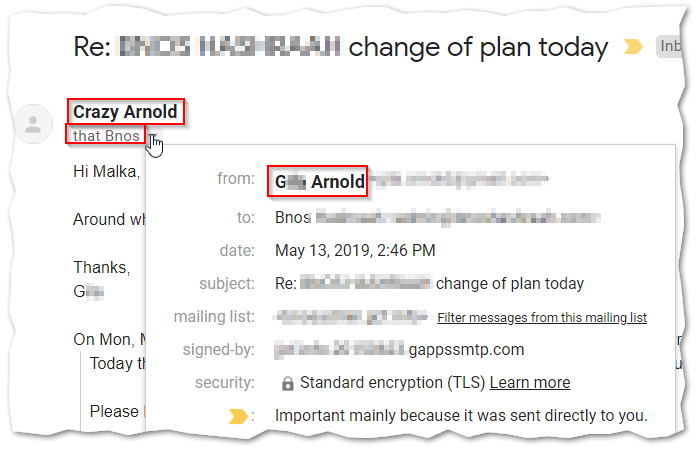 I checked in the mail headers, and the "from" address is normal. There is no sign of the word "Crazy" anywhere in the source.

This is not the only email thus affected. Many other senders are showing up with strange "from" names.

The common thread I can see between all these emails is that they have passed through a particular domain that I administer.

This smells very much like a hack. Any idea what kind of hack this could be, how to remedy it, or what preventative action to take?

It might be a browser extension. Have you checked those for anything unusual?

Not the answer you're looking for? Browse other questions tagged email or ask your own question.

20
Spam that comes from names in my address book, but not their email addresses
3
Flood of email messages from @attacker.com
1
Viruses From Email Attachments
2
Could embedding website links in an email lead to more hack attempts?
15
How can you prevent email addresses from being harvested from a registration form?
2
How to tell if an email is encrypted, or just corrupted?
0
idea to detect data breaches by letting users create single-click single-use email aliases
3
Securing email input from users