In a DEFCON 19 video Sam Bowne says that windows 7 machines CPU goes to 100% if you send a bunch of IPv6 Router Advertisement requests on a network. What would happen to a Windows 10 machine? Would it be the same, worse or would just nothing happen?

This is easy to test by starting such an attack from Kali Linux that comes with THC-IPV6 fake_router26, e.g.

By monitoring the Windows 10 target machine during the attack we can clearly see the difference: 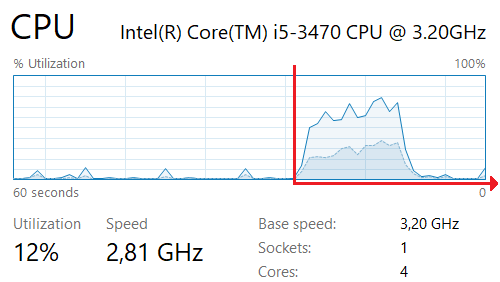 The increase in CPU utilization is noticeable but not dramatic. However, more noteworthy is that it stops after a while despite the attack is still ongoing. That's because Windows 10 stops adding new IPv6 addresses after reaching 100 addresses (while we were trying to add 900 addresses):

Not the answer you're looking for? Browse other questions tagged denial-of-service windows-10 or ask your own question.

17
Prevent denial of service attacks against slow hashing functions?
21
Should you care about DoS attacks if your server is using bcrypt?
3
Is it Feasible to Block Connections That Windows 10 Uses to Push/Pull? - ie: Phone Home, Watchers, Monitors, Onedrive, Cortana, Bing, Shadyness, Etc?
3
Netgear WNDR4300 crashes when port scanned
10
Can an intruder still possibly succeed with pass-the-hash or pass-the-ticket on Windows 10 / Server 2016 networks where Credential Guard is enabled?
4
Why were hyperlink auditing pings used for DDoS attacks and not any other requests?
0
Where can I configure certificate rules on Windows 10?
0
Failed logins on a windows server - performance impact?