I have been reading up on the details of Secure Boot, in particular the authorized and forbidden databases:

The above is from http://gschwinds.net/cache/SigningUEFIImages-1.31.pdf

I believe that it is designed this way to circumvent technological limitations. Remember that the BIOS is written in a low-level programming language (Assembly or C), which are not object-oriented obviously. As such, assigning attributes to a signature or certificate that determine whether it is black- or white-listed is not an option. You can not just put them all together in a single 'database' (array, register) - there's no context. The only way to determine whether a signature/certificate is black or whitelisted, is based on the 'database' it is stored in.

That being said, there's still no clear need for two separate databases: you can block everything that is not in the whitelisted database - right? However, look at the below UEFI Secure Boot algorithm to determine whether an image shall be loaded or not (copied from the paper you referenced). You can see that an image which is signed with an authorised (whitelisted) certificate can still be denied if its specific signature is blacklisted... That is not something you could have accomplished by having only a whitelist and blocking everything that is not explicitly in there. 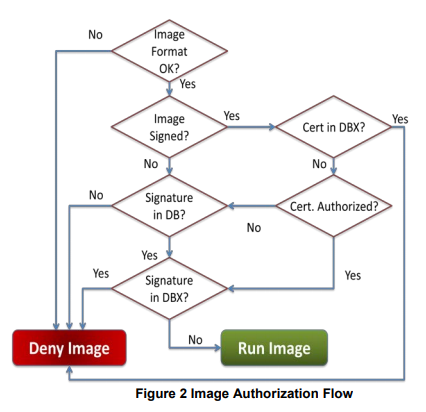 Not the answer you're looking for? Browse other questions tagged secure-boot or ask your own question.

1
Secure Boot - Verifying applications
2
How much of the system is secure boot going to cover?
1
Why authenticated boot not Secure boot?
1
Integrity Check on power on VS. Secure boot
2
Understanding Secure Boot
1
Secure boot for devices which don't have hardware security element