I would like to ask if I can trust unknown manufacturer detected by windows system configuration.

As you can see in the screenshot, all of the other services is known manufacturer but there is one service that using asus name but their manufacturer is unknown.

And after that how do I analysis it to check if it is really a malware ? doing static analysis ? dynamic analysis ? 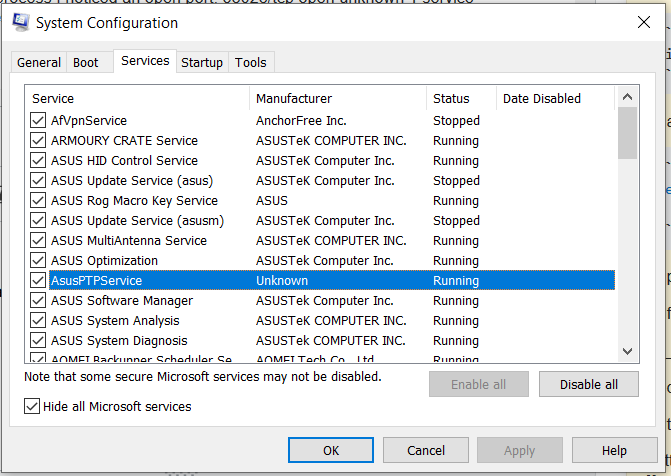 That service is created by the ASUS PTP driver, which for Intel 7th and 8th CPU units/devices, is the official replacement of the "Smart Gesture" touch-pad driver.

For the new systems, it comes pre-installed and is update-able to the latest driver version by running the standard Windows Update.

The manufacturer tag will probably get and update and show correctly in future versions.

So if you use a 7th or 8th gen CPU it should be entirely legit. There's also no reason for a malware to name itself like that, as it would have a very limited coverage; a malware will most likely use a more universal name. Nothing prevents you though from running some anti-malware scans on your system.

Not the answer you're looking for? Browse other questions tagged malware windows-10 service-tag or ask your own question.

8
What are the best ways to fake a web server
1
When MBR pirates grin as an indication of absolute pleasure!
0
Windows 10: telnet - Openwall GNU/*/Linux telnetd running on an open port normal?
1
A ransomware locked my operative system on C. Are the other drives at risk?