Difference between system uptime and last boot time in windows

As it shows in attached pictures, there is a "Difference between system uptime and last boot time" in my windows, it becomes an issue because AV, SIEM or every monitoring system shows a different time between system and boot.
Because of this problem, these workstations do not accept security policy from AV. 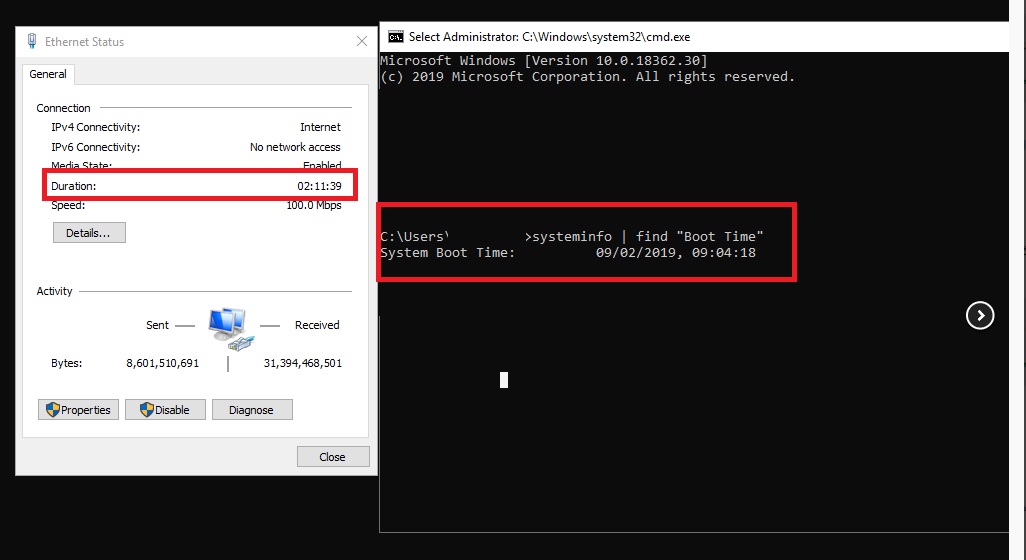 The left window is not showing the system uptime but the network connection uptime.

The network may have only been up for a couple of hours for multiple reasons:

I can imagine a several scenarios where the reported system uptime is different than Now - Boot time for a machine, though:

I understand the discrepancy to show in SIEM / AV dashboards. However, I don't see that as a reason to not accept security policy from AV. If the AV refuses to apply a security policy because it considers that they don't match -as seems implied by their support reply-, perhaps it is buggy.

Not the answer you're looking for? Browse other questions tagged antivirus windows-10 time or ask your own question.

10
Battling Malware without spending money
3
Do I have a virus on my hosted site?
1
Difference between antivirus and sandbox?
4
Hidden network continually connecting that I cannot disconnect
3
How to sandbox students' Python 3 code submissions for automatic assignment evaluation on Windows 10?
5
Securely detecting and correcting time drift for TOTP
2
Windows service with elevated privileges - Security concern
0
How to find discrepancy between exploitable and unexploitable VM