I'm preparing for an introductory information security examination in university and this is one of the tutorial questions on Firewall design. My concerns for the provided solution is how to define the rules for the firewalls in terms of the source port and the destination ports as well as any thought process before coming up with the partitioning.

Here are the relevant sections for my question

Notice that a source IP address can be easily forged. A reply packet sent to this spoofed IP address is delivered to the address and is therefore generally unaccessible to the packet spoofer. In this tutorial, we assume that a sent packet will reach its destination as specified in the destination IP address. Man-in-the-middle between a firewall and a host is out-of-scope in the firewall design. It needs to be separately dealt with by other measures.

(Firewall design:) Suppose you are the system administrator of a new secondary school, and your first task is to design the school’s network and its firewalls. You have decided to have 2 firewalls to protect your network. The machines in the network include:

(a) Lab: There is a total of ∼100 machines in a few labs for students to prepare their reports, search for materials on the Web, etc. There are also network printers in the labs.

(b) Teachers: Every teacher has a PC in the teacher's room. The teachers use the PCs to enter students’ grades, send/receive emails, prepare teaching materials, print exam questions, perform Web searches, etc. There are also network printers in the teacher rooms.

You need to configure firewall rules in the firewall table of each deployed firewall. Each rule occupies a row in the table. The fields of each rule, together with their possible values, are as follows:

(b) dest IP: a set of destination IP addresses. Likewise, its boolean expression can be defined over the predefined names listed above, or any newly-added names.

(d) direction: this can be IN or OUT. A firewall divides the network into two sectors, say S1, and S2. This field indicates which direction a referred packet is moving, either from S1 to S2, or the other way. Your design has to indicate the meaning/context of IN and OUT.

(e) action: either Block or Allow.

(a) It is important to prevent cases where student exam questions get mistakenly printed in the Lab.

(b) It is also important to protect the SQL server.

(d) In this question, we ignore the detailed issue of routing. So, we do not consider the Internet gateway and Network Address Translation (NAT). For simplicity, we just assume that all machines use “public” IP addresses.

(e) Will you increase the security of the school network if you use 3 firewalls instead? You can think of a good strategy of placing the third firewall and consider what machines to be placed on the new network segment. 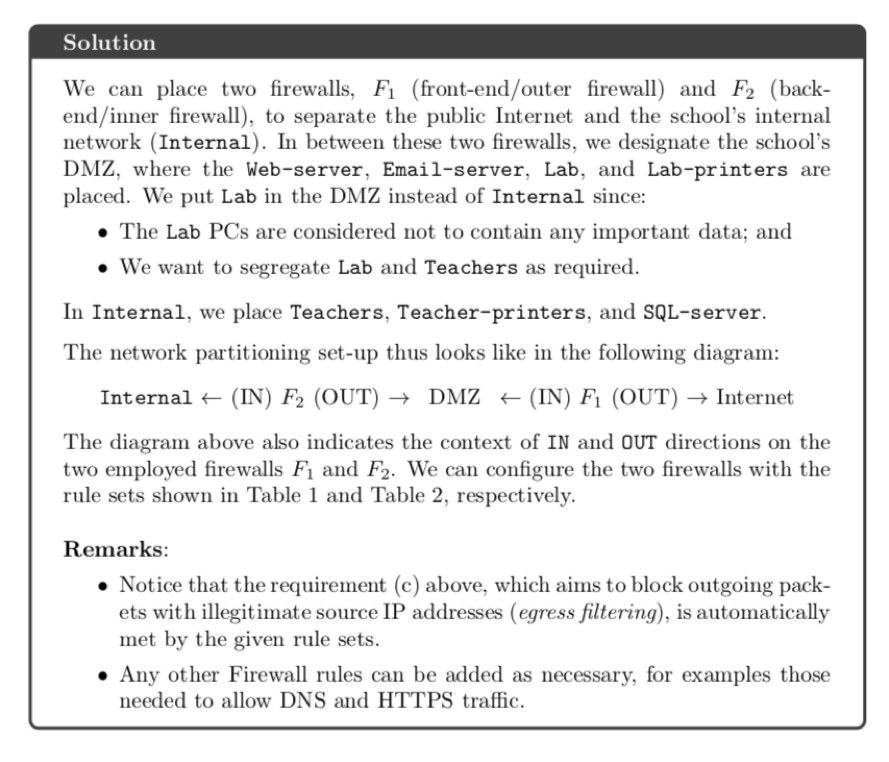 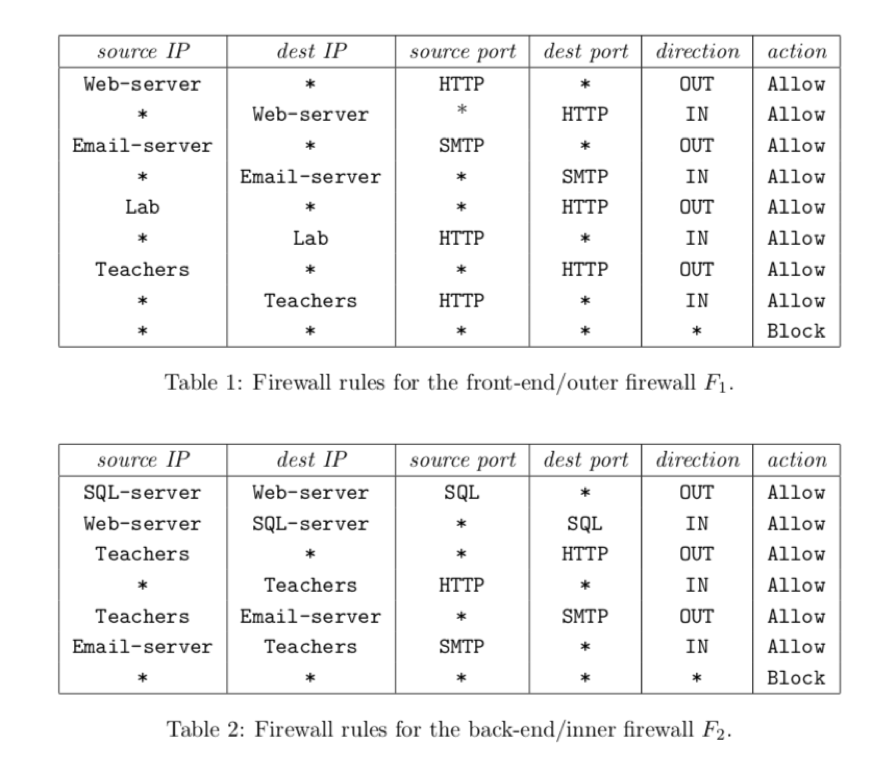 A stateful firewall processes rules in the direction the socket was initiated and then automatically permits traffic in the return direction that matches the socket. So when you have a http/80 webserver with a stateful firewall in front of it, you need a rule to permit traffic from clients to the webserver/tcp/80, but do not need a rule for the return traffic (no rule with source port 80).

This is different than a stateless access-list in a router. There you would need a rule for the return traffic. “Permit tcp any any established” simplifies those situations, provided you are not overly concerned with data exfiltration (a credit card processing environment for example).

Eliminating the need for the return rule is one of the advantages of stateful firewalls. Rule maintenance is easier and the network is more secure because return rules cannot be abused by (for example) setting source port to 53 (exploiting a return DNS rule to access a network).

Always include the protocol (usually tcp or udp) in firewall rules. TCP/80 is different than udp/80.

While a webserver listens on tcp/80 and tcp/443 (requiring inbound rules), most servers need some outbound access to function. DNS is a good example.

It is also important to understand what networks each device is on. A firewall can only block traffic that goes through it. So draw a map! Is your SQL server on the same subnet as your HTTP server? Does traffic from the internet to your webserver even go through the inner firewall? A firewall can have multiple interfaces and apply separate rules in/out on each interface (although some firewalls also support a “global rule” configuration.

Step #1 in a PCI audit is to provide the auditors with a network, firewall, and system map of the credit card data flow. There are similar audit requirements for healthcare and school data (those are mandated by law!)

A common design would be to have a subnet for your webserver connected to your outer firewall. You would have a subnet for your SQL server on your inner firewall. Your webserver is the most likely device to be compromised first by attackers , so keep it isolated. Your SQL server has the data that will get you fired if it is compromised, so keep it protected.

I’ll note that your existing rules allow the internet to portscan your teachers boxes by setting source port to 80. Preventing that is exactly why you want a stateful firewall, eliminating the need for that “source port 80” rule.

Not the answer you're looking for? Browse other questions tagged network firewalls ip or ask your own question.

23
To firewall or not to firewall?
4
How do I configure nmap to verify my firewall is performing stateful packet inspection?
2
How to use an old PC as a firewall on a tight budget?
0
Packet Filter with Access Control List
1
Firewall Blocking IP Spoofing
2
why do they call packet filter firewall a PACKET filter firewall
0
Stateful vs Stateless *host* firewall - is there any advantage?
3
How hard to receive a TCP packet then resend it to another IP on the local network keeping the Source IP address?
3
What's the difference between an “application-aware firewall” and a “web application firewall”?
0
firewall behaviour