Why does the NodeJS Crypto docs use CBC instead of GCM for RSA key-pair?

I have read that GCM is almost always more secure than CBC when implemented correctly.

However, in the documentation of NodeJS, CBC is being used as an example instead. The key-pair will be stored in the node environment.

Since the private key is being stored locally and CBC is an acceptable encryption for local files according to this answer, is it a secure enough implementation, or should GCM be used such as in this sample code?

The Cipher-Block-Chaining Mode becomes problematic if your threat model includes an attacker who actively manipulates the encrypted data. This allows an attacker to flip specific bits in the cipher to flip the same bits in the resulting plaintext - a property called malleability. If not paired with a MAC to ensure integrity, CBC is not very secure.

When encrypting a private key to be stored on a local device, the only requirement is confidentiality. An attacker could flip specific bits, but it is most likely that this will result in the private key becoming unusable instead. CBC is still good enough at providing confidentiality, and without the AES-NI extension, it's a lot faster than AES-GCM, as you can see in the following graphic: 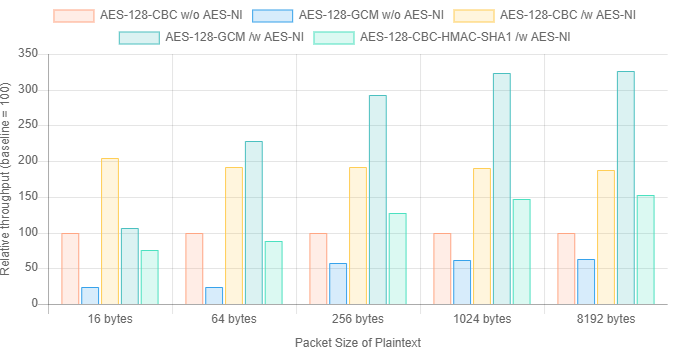 To give a succinct answer: Node.JS uses AES-CBC because for this case, the extra benefits offered by AES-GCM don't matter and AES-CBC is usually faster.

In the above graphic, the performance of AES-CBC without AES-NI is used as 100% performance. The relevant other category is AES-128-GCM w/o AES-NI. Of course, if NodeJS supports AES-NI, then AES-GCM is a better choice.

Not the answer you're looking for? Browse other questions tagged encryption aes rsa ciphers node.js or ask your own question.

1
Symmetric encryption involving load balancers - can't randomize key?
7
Is Salt, IV and Key necessary when encrypting password in a database using AES? If so, how should they be used?
3
How does RSACryptoServiceProvider generate keys
1
Crypto++ RSA - Encrypt and sign with the same key pair
3
Is it secure to use a part of the key as IV in AES?
6
How can we serve sensitive encrypted data without storing the key? Should I use user-defined passwords for keys?
2
security protocol against attacks on SSL/TLS
3
Are ECB and CBC modes of operation generally insecure?