Why are many US Department of Defense certificates not trusted by Firefox?

There are a number of US Department of Defense (DoD) websites that I need to access on a regular basis (e.g., https://ataaps.csd.disa.mil/ and https://web.mail.mil) that Firefox issues a Warning: Potential Security Risk Ahead with error code SEC_ERROR_UNKNOWN_ISSUER. Looking a little further, it says "Peer’s Certificate issuer is not recognized."

There seem to be some obvious reasons why the DoD would want to issue its own certificates (cf. Why would an organization like the DoD prefer to use its own Root Certificate(s)?) including that this way they are in charge of the security and not someone else and the cost is small since they need certificates for other things.

My question is from the opposite end and is NOT why does the DoD issue their own certificates, but rather why Firefox does not trust certificates for US government sites by default?

The more practical question is as adding exceptions for all sites whenever they are encountered without doing even a cursory glance seems like a bad practice, is there a way to globally add an additional CA (???) to make Firefox recognize the US DoD (or whoever is the problem) as a certificate issuer? Does this have drawbacks and open my machine up for additional attacks?

There is an important business behind certificates, and certificates issuers would prefere to avoid that governments start to use their own certificate authorities. Imagine a world where any citizen would have one personal certificate (or one for signature and authentication and one for encryption) on its national ID card or passport, and where all official sites would have a certificate issued by a governmental agency. Who would then buy certificates?

But there is another, maybe more fundamental reason. Since Brave New World from Aldous Huxley, or 1984 from George Orwell, we know that governments could try to bring us into privacy restricted paths. There is a political principle saying that anything and anyone should be controlled by someone else. Because of that, best practices recommend that a certificate issuer should be independent from the certificate user(*). Because this limits the risk for an organization (be it governmental or not) to issue and use hidden certificates just to be able to spy on encrypted channels. That's what some anti-malware software and corporate firewall do: they install a private certificate into the certificate lists of the system and well know browser to allow Man In The Middle attacks to be able to identify malwares in HTTPS channels. Well, the end user is more or less informed on it, and they certainly could not do the job they are payed for without it.

I know it, and trust my employer and the security team not to be too aggressive against my own privacy, but I would not dare sending too private information that way.

Imagine know that all intelligence agencies from most countries could do the same and freely spy on any HTTPS channel, and ask yourself whether this is the world we want to live in. Read (again) 1984 if you hesitate...

I am not excessively confident that NSA and other main intelligence agencies cannot do that, but it is not a reason to blindly allow it, IMHO

(*) independence from a strong governmental agency can be relative... and independence between a company and its principal client is only theoric. That latter part largely contributes to the first one.

The US DoD operates their own private PKI, complete with their own private CA root certificates. The reasons they do this are twofold. First, it's a cost measure. You may think that a $14 certificate isn't a big expense, but when you issue hundreds of thousands of certificates annually, those costs multiply fast. The other reason is most of their certificates are for internal use only, and are issued to private servers that are not intended for the general public to access.

This is no different than any other large business that maintains thousands of nodes and hundreds of thousands of certificates. (Actually, the DoD is different in that they issue millions of certificates annually. Each soldier carries a smart card - which has its own unique certificate. This smart card grants access to everything from remote doors to system logins to accessing their paychecks and bank accounts; and most all of those devices likely have certificates, too.)

Usually when a business operates their own PKI, they use a commercially trusted CA to sign the few certificates on their exposed servers that the general public is intended to visit. And the DoD is no different -- their recruitment site, https://www.goarmy.com, has a certificate issued by Entrust.

The reason they don't use a lot of externally signed certificates is simple: there is no need for anyone outside of the DoD to trust their internal servers. If you're not in the military, you probably would never be on the same network as most of their server certificates. And if you are in the military, you have the Army's root CA already pre-installed on your official computer.

One way to fix it is to import the necessary DoD root CA cert into your Firefox's trusted certificate store. Then you'll have the trust you need, without having to examine every mouse click. 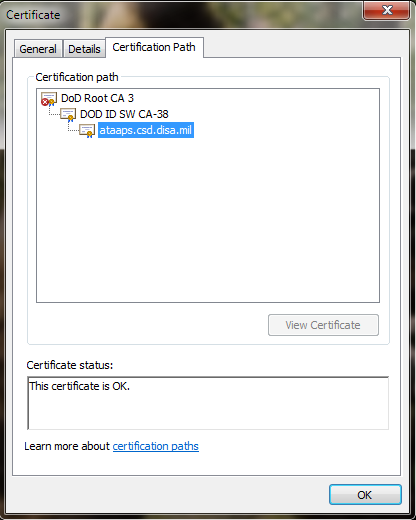 There are several possible reasons the DoD has chosen to operate as an untrusted authority:

1 - Becoming a trusted Certificate issuer is a VERY hard process. Browser companies have very strict requirements for how a central authority has to be registered and managed to make 100% sure that they are not being compromised. Until recently, self-signed certificates were often used to save money. If you need lots of certs like the DoD does, then you don't want to spend millions of dollars a year just buying certs from trusted authorities. You also don't want to spend millions of dollars on jumping through all the hoops you need to go through to become and retain your status as a Trusted Authority when the only person using these certificate is yourself.

While things like Let's Encrypt and AutoSSL now make this easy to do these things for free, if the DoD already has a solution that works, the time and cost of changing everything over may not be worth it.

2 - In the case of military or intelligence agency certificate authorities, there is also a chance that this is actually a more secure certificate than one issued by a security authority. Basically, to get that Authority status, you need to let a bunch of tech nerds from private outside companies into your systems to verify your methods. If an organization such as the DoD is using classified cyber security methods, then this would be considered a security breach to allow this process to happen.

To clarify: I am not referring to their authentication protocol, I mean that the inner workings of the building and network that houses the server would be classified. Allowing an outside audit would require allowing yourself to be footprinted. Every little piece of information from their techstack, their methods for access control, names of on-site personnel, etc are protected information in a secure facility that you don't just let people have access to lightly.

3 - In the case of a military or intelligence agency you may not trust "Trusted Authorities" because they are such major targets for hackers. If Comodo gets hacked, and the hacker realizes that comodo sells certs to the DoD, then that hacker can start intercepting classified government communications. Or the more likely scenario, China realizes that the DoD is using comodo; so, they spend millions of dollars using every intelligence trick in the book to place a loyal agent as an employee of Comodo so that they use that access to spy on the DoD.

As to the actual question of why browsers do not simply accept them as a trusted authority:

In short, it all boils down to reason #2 above. Browser companies never just give out trust that they have not verified, and the DoD does not just let a bunch of civilians poke around in what is one of their most critical security systems. If the DoD does not let them audit their work, the browser company is not going to make any assumptions just because the DoD should know what they are doing. Infact, a year or two ago Symantec (one of the largest and most reputable cybersecurity companies in the world) failed their audit and nearly lost the right to sell certificates as a Trusted Authority.

Although the sites mentioned in the question are public-facing, these sites appear not to be intended for use by the general public. For example, https://web.mail.mil is likely a webmail portal for mail.mil.

Notably, the DoD does use certificates issued by widely-trusted CA's on other sites that it runs, which are intended for public use. For example, https://milconnect.dmdc.osd.mil/milconnect/ is secured using a certificate issued by Entrust.

For sites that are public facing, but only intended for use by service members of US military, the DoD can reap the benefits of acting as its own CA. The DoD can easily install its own root certificate on devices that it issues to military personnel, and can instruct members of the military on how to install its root CA on personally-owned devices if necessary.

Firefox is a software product focussing on user privacy. Its user base is global. Who do you trust by default on a global scale? Everyone will have a different answer. The certificate authorities that you trust are a subset of the ones Mozilla trusts if you edit the list in Firefox, or likewise in your operating system's trust store. You can add a certificate authority's root certificate to Firefox, only do so if you trust it. You can remove trust for authorities outside your sphere of interest. Your system administrator might have added an internal root certificate for "security reasons". Be aware that root certificate owners, when operating your proxy or internet connection have the capability of SSL-inspection. This was first presented in the hacker magazine Phrack issue 57, but is nowadays a "security" feature of products like Bluecoat. Note that your system administrators might spy on you if you add root certificates or if you use your company's devices,

Not the answer you're looking for? Browse other questions tagged certificate-authority firefox government or ask your own question.

15
Why would an organization like the DoD prefer to use its own Root Certificate(s)?

1
Firefox detected an invalid SSL certificate
4
Certificate verified using two different paths
1
Can a certification authority sign another CA's certs?
15
Why would an organization like the DoD prefer to use its own Root Certificate(s)?
5
Google certificate and CAA
2
How to force browser to trust a self-signed cert
0
Firefox reports every HTTPS page as unsecure in Windows 7 for standard user
0
Purpose of Decrypting & Scanning HTTPS traffic
1
What are the sources of “SEC_ERROR_REUSED_ISSUER_AND_SERIAL” errors when using self-signed x509 Certificates in PKCS#12 files?
3
Why does Firefox no longer recognise certificates issued by Multicert / Camerfirma?