tl;dr for those who are misunderstanding my post: imagine your friend who uses GMail suddenly tells you they have 2FA enabled, and logged in to their account, and that the 2FA code (SMS) they received upon requesting it came from your number. That would be impossible, right? That's what happened here, except it wasn't between two friends in this case, but between me and a complete stranger.

I have a Google account, and for various reasons, I decided to activate 2-factor authentication (2FA) for my account (i.e., input your password, and confirm the login by typing in a 6 digit code sent to your registered mobile phone number). I did this about a month and a half ago.

The first few codes I received came from a sender identified as "Google" by my phone/service provider. Then, on the 21st of January 2020, I received the 2FA code from a mobile number, when I tried to log in. At that time, I didn't think much about it. I just presumed that Google was probably using a couple of additional numbers and whatnot as backups when there were too many 2FA codes to be sent out or whatever. However, I did retain the SMS, as I was surprised to receive it from what was clearly a regular mobile phone number.

Since then, every single 2FA code I've received has been sent by "Google", and I've never received another code from a mobile number of any sort (or for that matter, from a sender with an identifiable number). Being a bit curious, I called that random number from which I had received the code then, and much to my surprise, somebody actually answered.

They seemed equally surprised by the fact that I had received a 2FA code from their number, and were utterly confused. They gave me their first name and location, and told me I could find them on WhatsApp (which I couldn't; I tried using another person's phone to try and find them on WhatsApp, but that didn't work either).

I am really confused now, and I thought I'd turn to the SE community for some inputs.

Some information that might be pertinent in this discussion: 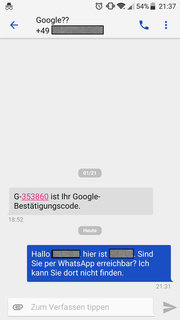 My question is: what is going on? Is it possible for a 2FA code to be sent like this?

The SenderId of an SMS can be easily spoofed by anybody betweeen Google and your phone. Note that Google does not directly send you an SMS but uses service providers that have network connections (maybe indirectly) to your phone. And since the Telcos between Google and your phone want to filter out non-person-to-person traffic (because of $), it makes sense for someone on the route to make the SMS look like person-to-person (p2p) traffic by choosing a (random) SenderId that comes from a p2p number. And if that number is already in use, even better. :-)

I work at an SMS aggregator who develops 2FA, delivers SMS for 2FA, uses SMS routes, and has heard of SenderId spoofing.

Not the answer you're looking for? Browse other questions tagged authentication passwords multi-factor google sms or ask your own question.

0
What is GitHub authentication SDT ? And why is it sending OTP from a residential number?
0
If I receive Google verification codes that do not work, is my phone compromised?
3
Is it normal to receive working SMS verification code from strange number?
1
Two factor authentication turned on for my Google account (Phone) - but still hacked
2
Received Google 2FA Code via SMS from two unknown phone numbers
0
Android phone's lockscreen PIN disappeared?

5
Does Google account's "recovery phone" have any benefit if I never forget my password?
4
Whatsapp is adding passwords: what is the threat model that they want to protect their users from?
1
Which telephone numbers do Google use for Two factor verification codes?
3
Is it normal to receive working SMS verification code from strange number?
139
Received a set of SMS/MMS containing 2 photos, a voice message, and a text "I need help" with Google Maps link from a known contact. Is it spam?
64
Is 2FA via mobile phone still a good idea when phones are the most exposed device?
0
How can I use a user's own SMS service to send OTP and make mobile number verification in my Android app?