The domain & tenant has SPF and DKIM properly configured and DMARC policy set to p=reject. Still, emails spoofed with the domain in the From header aren't rejected, but appear in the Junk Email folder on Office 365. People do check their Junk Email for false positives, and are still reading all the CEO frauds, sextortion letters etc.

This seems a feature instead of a bug, as described in Microsoft's documentation:

If the DMARC policy of the sending server is p=reject, EOP marks the message as spam instead of rejecting it. In other words, for inbound email, Office 365 treats p=reject and p=quarantine the same way.

Office 365 is configured like this because some legitimate email may fail DMARC. For example, a message might fail DMARC if it is sent to a mailing list that then relays the message to all list participants. If Office 365 rejected these messages, people could lose legitimate email and have no way to retrieve it. Instead, these messages will still fail DMARC but they will be marked as spam and not rejected.

However, this reasoning has some flaws:

Is there any setting on Office 365 to alter this behaviour and reject these messages?

This can be achieved on an Office 365 tenant by adding a transport rule. An email not passing DMARC tests of a domain having p=reject will have dmarc=fail action=oreject and compauth=fail reason=000 in the Authentication-Results header.

action Indicates the action taken by the spam filter based on the results of the DMARC check.

Unfortunately, the composite authentication compauth=fail reason=000 is the same for both p=reject and p=quarantine. Using it alone would also affect mails with the less strict policy to only quarantine it. Following the RFC 7489, 6.3 you wouldn't want that.

To avoid false positives, requiring both would be the best. However, Office 365 transport rules doesn't have an option for "and" conditions: the only suitable option "a message header includes..." can only be used once, and it only has "or"-lists i.e. "includes any of these words". For these reasons I've picked the dmarc=fail action=oreject and use it in the following instructions.

Steps for adding the transport rule:

The equivalent for this would be "Delete the message without notifying anyone."

However, Microsoft Office 365 doesn't support connection-stage rejection, so the latter doesn't exactly respond with an SMTP 5xy reply code, but sends a non-delivery report (NDR) to the envelope sender, with the defined custom message: 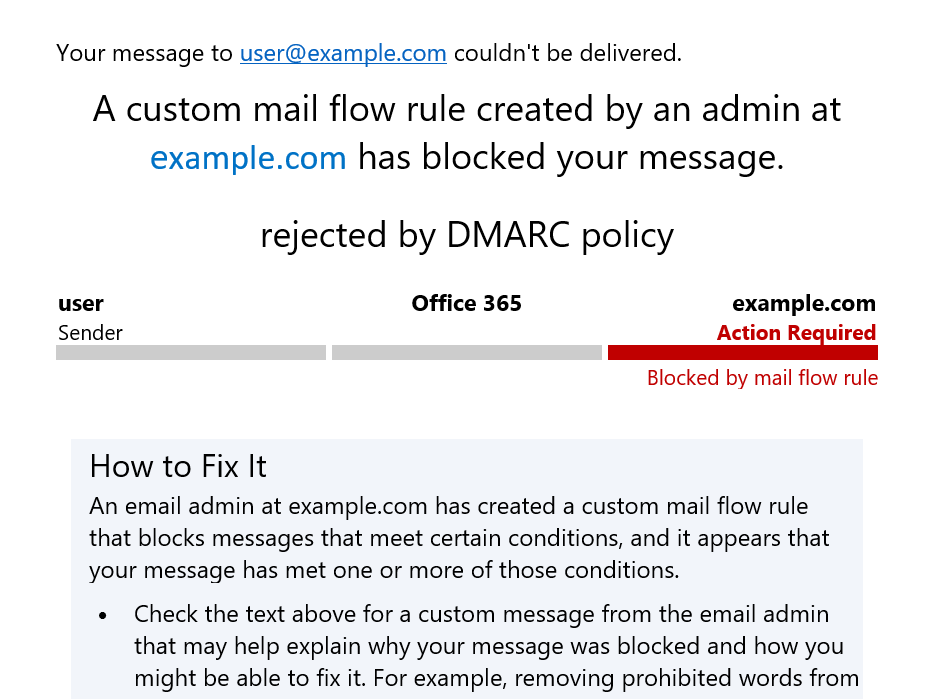 The technical error on the NDR is 550 5.7.1 TRANSPORT.RULES.RejectMessage; the message was rejected by organization policy and it has the original message headers attached.

1
How to spoof a MIME-level email address
3
Understand DMARC report before starting quarantine
3
DMARC policy result when exactly one of SPF and DKIM fails and exactly one succeeds
2
DMARC none policy overwrites local policy
0
Soft-fail vs Hard-fail SPF + Monitor vs Reject+Strict DMARC, could it be counterproductive?
2
SPF and Office 365 email accounts spoofing other Office 365 email accounts
3
What is the point of having SPF and DKIM set up, but having DMARC with policy=none?
0
Rejected because of DKIM check fail; alignment check fail
0
DMARC falsely reports impersonation