How to make information unrecoverable?

I manage a company's equipment and the manager has used a piece of equipment for the last 3 years. He told me, that he will give that equipment to one of the employees. However, he has told me to please make sure that the information on it is deleted so that it is unrecoverable.

I like this subject and don't know much about it, so I deleted the information with the linux "rm" command. I know that it is still possible to recover it with forensic techniques. The information on the device was critical, e.g. customer information and information about upcoming projects to be released.

The root disk is SDD and the partition that is not encrypted is HDD. Currently the system is with the Manjaro distribution.

This is a recurring question, and it comes with a bunch of caveats.

Threat level is a factor. If this is government classified data the official answer is "Destroy the Drives!"

That said, in the commercial world there is a lot more tolerance.

Running DBAN or dd with zeroes against the entire drive will sufficiently wipe it. You should of course VERIFY that the wipe actually took place by looking at the drive contents and confirming zeroes. Zeroes are easier to confirm than random.

You don't need to perform multiple wipe passes to defend against magnetic force microscope attacks. This was a laboratory curiosity more than two decades ago against MFM disk drives that are no longer used and against drives that measured in MEGAbytes. Even then, they could only extract a handful of bytes. A single pass of zeroes will defeat any Earth based forensic facility.

True, bad sectors and hidden disk overlays won't be wiped. If this is a realistic concern for you, fall back to the DoD standard of destruction.

Trotting out wear leveling for solid state drives is also a bugaboo of little reality. Yes, it's technically possible to perform chip-off removal, bypass the on-chip wear processing and find data that survived wiping. However this data is tiny discontinuous snippets and bits that are nearly impossible to reconstruct context from. This is beyond all standard forensics labs and would cost millions of dollars in the specialty labs to even attempt it and would likely yield little to nothing for the effort.

Again, if this is a realistic concern for you, fall back to the DoD standard of destruction.

The drive costs are likely no more than a couple/few $100 bucks, act accordingly.

This is a recurring question on this site.

The tricky part is SSD drives that do wear leveling in hardware. That means that some of the data will be in "hidden" sectors that you can't access / wipe from the operating system.

I think there are 4 categories:

Case 1: you had Full-Disk-Encryption enabled from the beginning. Great, just format the disk. Any data left in un-fortable parts of the disk will be encrypted with a key that no longer exists.

Case 2: the hard drive firmware supports a secure erase. Then maybe the manufacturer provides drivers or utilities to call that secure erase? I'm not sure how this handles SSD blocks that are starting to fail in a way that the data can't be written, but it can still be read forensically. Is that even a thing to worry about?

Case 3: you're not worried about advanced forensics. You are only really worried about attackers reading the uninitialized hard drive space from within the operating system. If an advanced actor wants to solder new chips onto your hard drive to read the fragments of data left in wear-levelling or failing sectors, let them. In this case, a single pass of 0's with dd, or some equivalent tool, will be sufficient (see other answers).

Case 4: none of the above As always, the only guaranteed way to ensure that data is unrecoverable is to physically destroy it: 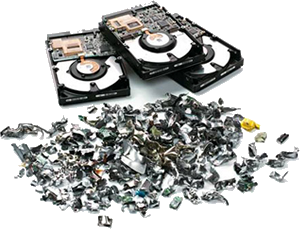 0xFF, not zeroes. One wipe is adequate, three wipes are more than enough on NAND. Some software may cheat you when doing this type of write, however (for speed). Something like dd if=/dev/dero bs=4M status=progress conv=fdatasync will show the real write speed so you can plan when to come back to the systems you're wiping. If you're all about that jazz, try oflag=sync instead. Make pizzaz.

True, some data may be left in discarded blocks, but accessing those blocks is not trivial. SSDs discard a lot more blocks than spinning drives (HDDs), perhaps 10-20% of total capacity in the drive's lifetime. Cheap SSDs discard most. Google TRIM.

Get it right by creating a veracrypt container spanning the entire drive, and letting it overwrite existing data once (the default and only option).

And Can I use Truecrypt/Veracrypt to "Wipe" a partition?

Honestly, you should use Bitlocker on corporate SSDs to avoid this problem. Then you only need to aggressively overwrite the key portion of the drive. If it is serious concern, also ensure that hiberfil.sys and pagefile.sys are destroyed. -> veracrypt

See https://techgage.com/article/securely-erasing-your-ssd-with-linux-a-how-to/ for a quick way to erase, using hdparm.

Not the answer you're looking for? Browse other questions tagged encryption forensics deletion or ask your own question.

99
How can I reliably erase all information on a hard drive?
4
What can be recovered? Securely deleted files
4
Can I use Truecrypt/Veracrypt to "Wipe" a partition?
2
How to make data in hard disk unrecoverable on linux

18
What should I do when classified information stayed on a unauthorized laptop?
5
Is it secure to overwrite unencrypted files with encrypted ones?
17
Is there a real-world example of SSD data recovery?
3
How secure is the windows Cipher command?
1
Is it posible recover file from an encrypted home directory with a forensic tool?
0
Unrecoverable information in HDD